Yeah, it is. These days I reach out to writers/devs that are on problematic platforms and see if they have a Ko-Fi or something instead. It's worked a few times.

My Twitter is usually the best place to get me at, everything else is so busy, haha

Thanks for for the recommendation, and yeah, I'd rather support a writer directly than give the money to Amazon.

I'll have a look through your collection on here and see what other furry VNs you have listed. I'm always keen to check out more.

Anyway, if you want to chat more hit me up on twitter, @EnbyKaiju :)

Haha, I do IT support for a day job, the number of times a day I have to resort to googling any issue is almost embarrassing. Hoping you get it sorted soon! A lot of folks are going for visual novels on Android now so there has to be a quick fix out there.

Oh, and did you have the name of that other game you were playing? I'd love to check it out. Can never get enough of queer monster games :)

Hi, I did a little digging and I found a guide for you to try. I don't play a lot of games on Android myself so haven't experienced the problem before, but it looks an easy fix

Haha, I grew up playing the Tex Murphy games & of course Sam & Max (my favourite furry malcontents). The fact that we're still getting games from both franchises makes me so damn happy, and great fodder for the inspiration of noir writers :)

Thanks for saying so! I really appreciate it <3

I've actually spoken with the artist who did the characters and he's on board for a sequel, if I can get the energy to write one, thinking about taking a different direction but with a lot of familiar characters, so I'll have to think about what a sequel is going to mean. Maybe give Karla & Raxx more screen time.

Thank you! I'm glad you enjoyed it, your words are very much appreciated :)

Heck, if Kaiju Noir can be the reason folks pick up the bundle that makes me feel damn proud. I hope you love it!

Thank you! All the artists did an incredible job and I feel so grateful to have worked with them :)

*Roars thanks in nonbinary monster* <3

It was fantastic finally getting to talk to you about Minotaur Hotel
I'd been meaning to have you on so long I knew you had to be the first for the year, haha

Thanks so much for the wonderful feedback!

Definitely looking at doing something longer next time around. We wanted to do something shorter & snappier in this first one, more in line with the pacing of older crime fiction (I've read a lot of Lawrence Block, haha) and wanted to do similar pacing which I think doesn't quite like up with the medium.

Keeping our paws crossed for much bigger next time. Monstrous even.

I appreciate the honest feedback. The political elements are a big part of the story and they definitely aren't going to strike a match with everyone that plays. But then few games do.

Thank you for giving something different a try though :)

Thank you so much <3
Wonderful to hear you enjoyed it so much!

Your own work was definitely inspiration to get this finished :)

Kaiju Noir is a pulp fiction visual novel that is quick, dirty, and satisfyingly to digest in one sitting. This is a tale of giant monsters, intrigue, corruption,  and redemption.

In this city of ever-night you take on the role of Detective Caribara, private investigator of New Monstropolis, as they and their assistant Alixorus struggle to keep their agency running. Until a new client arrives, bringing with her a case that could either lead to wealth, or a watery grave. 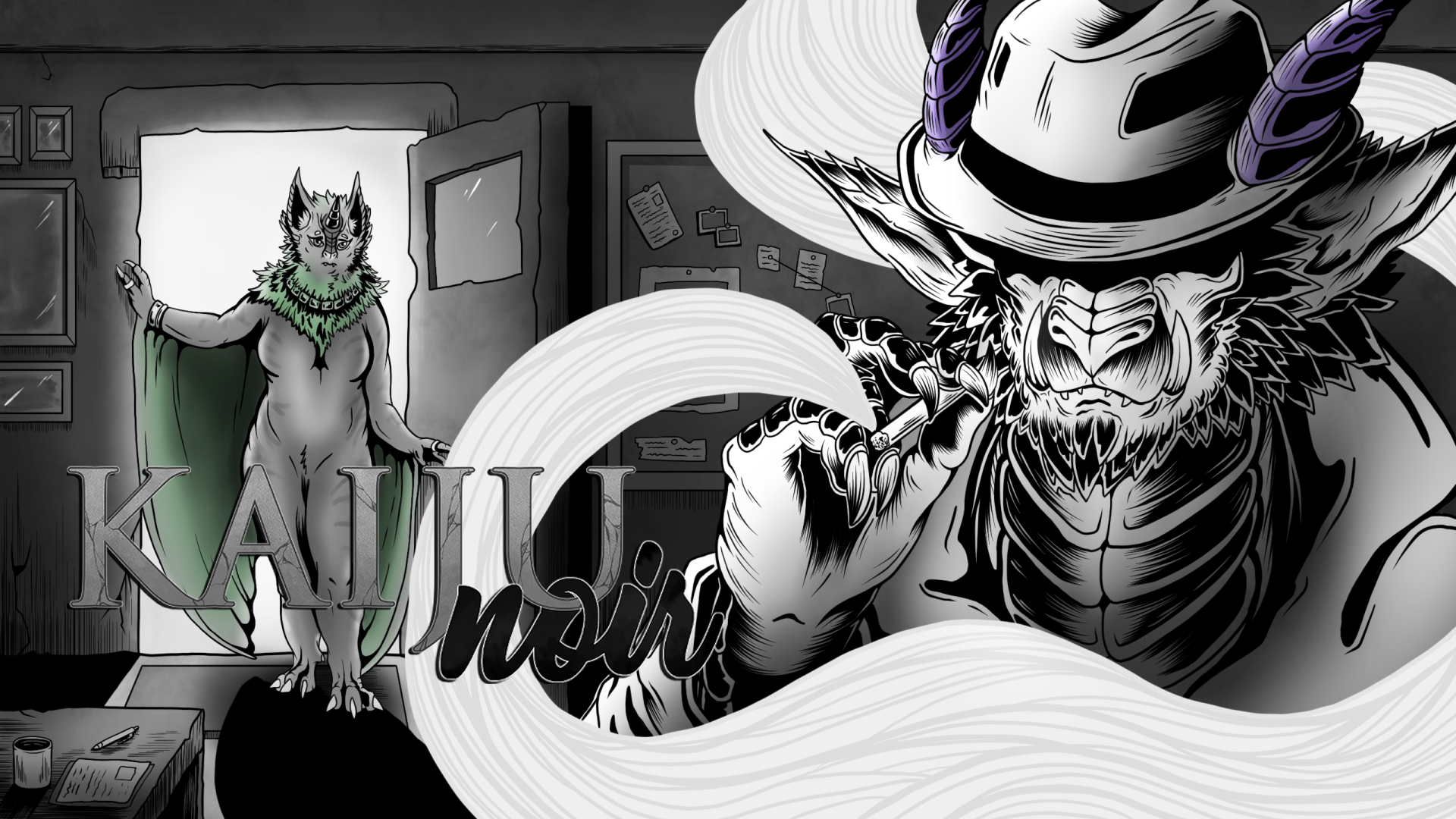 Get it now at: https://enbykaiju.itch.io/kaijunoir

Haha, well you'd definitely get to know a bunch of monsters by the end, and "lovable" is totally up to the perspective of the player. I'm sure a few of them would think of themselves as lovable.

As for cool, that's up to you. If you like mysteries & like your stories with a healthy dose of anti-fascism then it might just be your cup of kaiju-tea

Thanks, I appreciate it, and I've been through all this before. Too many times probably (damn capitalism), so I get the struggle.
If we weren't constantly going back & forth into lockdown where I live I don't think I'd be taking it so hard, but it's hard to keep a routine going without leadership or when you're having to switch up being in the office or stuck inside your house & can't get a pattern going

I'll be good though, things could be worse. Just looking forward to getting this game done already for y'all :)

Haha, our character artist is amazing (@LluisAbadias on twitter if you want to see more of his stuff)

I'm glad it felt like something you could relate to. Even a couple of years later it remains a very present feeling.

Just know you aren't alone, and who you are is important, even if some days we just want to go hide in space forever ❤️

Just have to say, folks.

I wish I could release the full version of the game right now. I want you to play through the story, meet all the monsters, listen to the awesome soundtrack.

We're like 80% there, but it's taking a lot of self control not to just release it in early access, haha

Hi Incudo, I'm so glad you liked the demo!

Things have come a LONG way since the demo came out, and in that time I decided to take it in more of a novelesque way than say a traditional mystery solving game. This is mostly due to limitations of the engine. I'm hoping in future instalments (I've a few sequel ideas), but trying to put in a bunch of investigation mechanics would either feel trite or out of place with what I'm working with.

There's going to be a LOT of choices throughout the full game, some that affects how the story progresses, some that simply gives you  more backstory in whatever element of the lore you'd like to know., but none that will lock you out of finishing the game or giving you a "bad" ending

In the end I want Kaiju Noir to be like one of those pulp novels from the 1940s. Something you could read through in one sitting (around 2-3 hours depending on your reading speed) and that makes you feel a lot of things. I'm hoping that's what I'll be able to deliver .

Awww, thanks. We're getting pretty close to done, mostly just getting the art & soundtrack sorted
Glad you like Alix, he's one of my favourite characters I've written and you get to see a lot more of his personality later in the game. :)

Finally got around to playing and... wow
I've played through so many visual novels over the years and I am absolutely in awe of what you're doing here with Minotaur Hotel

Not only are the premise, art and characters wonderful, but this might be one of the most technically impressive VNs I've ever seen. At each stage I keep finding myself going "How did they do that?" "I didn't know Ren'Py could do that?" "What is this wizardry???" haha

You're making something truly amazing here, and I hope you are proud of what you've created <3

Once the full game is done we are planning to have it available on Android as well as PC/mac/Linux if possible. I know the build process can be a little tricky, but we'll do our best :)

I'm glad you found it relatable :)
We live in a world where it's a fight to exist a lot of the time, the idea of just going off on your own and getting to be yourself is something that still calls to me.

Hope you have a wonderful birthday <3  I'm so glad you're enjoying what we're putting together so far :)

We all need more games about who we are :)

Thanks a ton! <3
I'd not heard of James Ellroy before so might have to look them up. My literary backing in the genre is more around Lawrence Block, but there's so many good writers out there.

I'll put your vote into the poll :)

Thanks, this means a lot to me :) I want to make the best game I can, and with the support of folx like you I know that will happen

Thanks, that means a lot :)

I never wanted to go all in on the same sorts of designs as the giant monster movies I love, this game is all about doing things different. But there's something really special about having the right vibe there from the start, instead of using the same anime-style characters as stand-ins or waiting for art before I did any worldbuilding.

Still, it was only when I got that first character art that I realised that Kaiju Noir would be a real thing, not just some project I'd never finish.

I really appreciate that, and I'll pass it on to the character artist

We're going to be digging a lot deeper into that art style in the full game, including a more cohesive background style (at the moment it's a collection of location photos I've taken plus a bit of google images then passing them through filters to get the right feel), but I really feel like we have something special going with the character art. And for that I 100% thank the artist ( @LluisAbadias on twitter) who somehow gave me exactly what we needed after a single play of the demo I had running.

Getting the right feel to me was important, especially with the tone. As a few people have said "I came for the art, and stayed for the story", and that's what we're trying to do right. There's a balance you need to strike between mature & jaded (or monstrously sarcastic in my way of thinking) and I hope we're getting that right.

Haha, I feel like I should quote you on this. Such lovely things to say.

We're going to do our best to make an amazing game, we've got lots planned and a lot of story left to tell.

Thank you so much for the kind feedback! :)
Future versions will have a bunch of updates including music & accessibility options, however we're planning to stick with the black & white for character sprites to keep on with the 1930/40s film aesthetic

Each character has their highlight colour, e.g. Cari's purple, Max's green) but at least for this game we're planning to stick with that plan.

It is tempting to put together coloured versions for future projects though, something to think about.

This is so good! I grew up on P&C adventures so it gave me that wonderful nostalgia buzz, while at the same time made me grin from start to finish. I'd love to see more of this as sexually positive adventure games are something we need lots more of <3