even if it's full of mistakes

it'll all turn out in the end, I guess

Finally finished the thing that I started 176 days ago. Enjoy!

also check out the song+illustration that inspired this, the cover that I like more and the Twitter upload of this with slightly better resolution

Alright, it took me way longer than it should have for me to start reading this update and wow I so regret sleeping on it for so long.  Every new scene was a delightful read and it had my heart genuinely racing at times.

To cut it short: I didn't think you would go there with Kota, and you went there. Took me by surprise, props to that. In my first couple playthroughs he didn't particularly stand out to me among the other characters but right now he's really gone up on my list. I really like the way the narrative style adapts to the background and personality of each character and Kota was no exception! incorporating the haikus into the narration was lovely, specially as the poetry segments build up towards the end. Also, the way you take full advantage of the mythological setting to tell each character's story really shines here. Both the way their relationship is explored and the sheer, unrestrained romanticism in Kota's words and actions really feel like they could only come out of an ancient legend (very similar to Asterion in a way!).

For the other stuff, I loved the way the sprites were handled in the last scene of Kota's route with him standing alone against everyone in the room. A masterpiece of ren'py cinematography, truly. And the Hinterlands skip dialogue was super fun too. The fourth wall break did not feel too out of place for P's character, and the way he talked about Storm just had me sobbing... 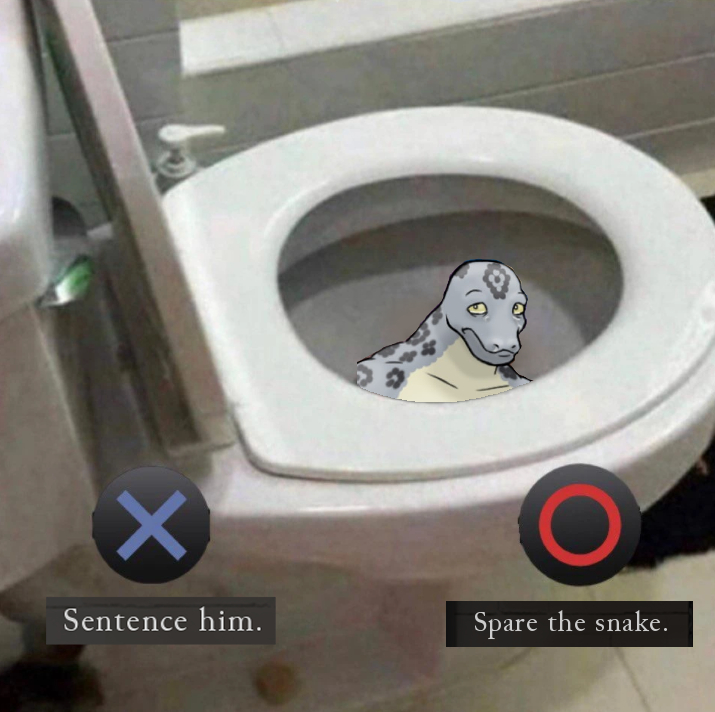 The linework and the patterns are beautiful!! Hoping we see more from you!!

record 1 hour Argos quickie!! Ruthless has just been constantly in my mind and I had to get it out of my system... 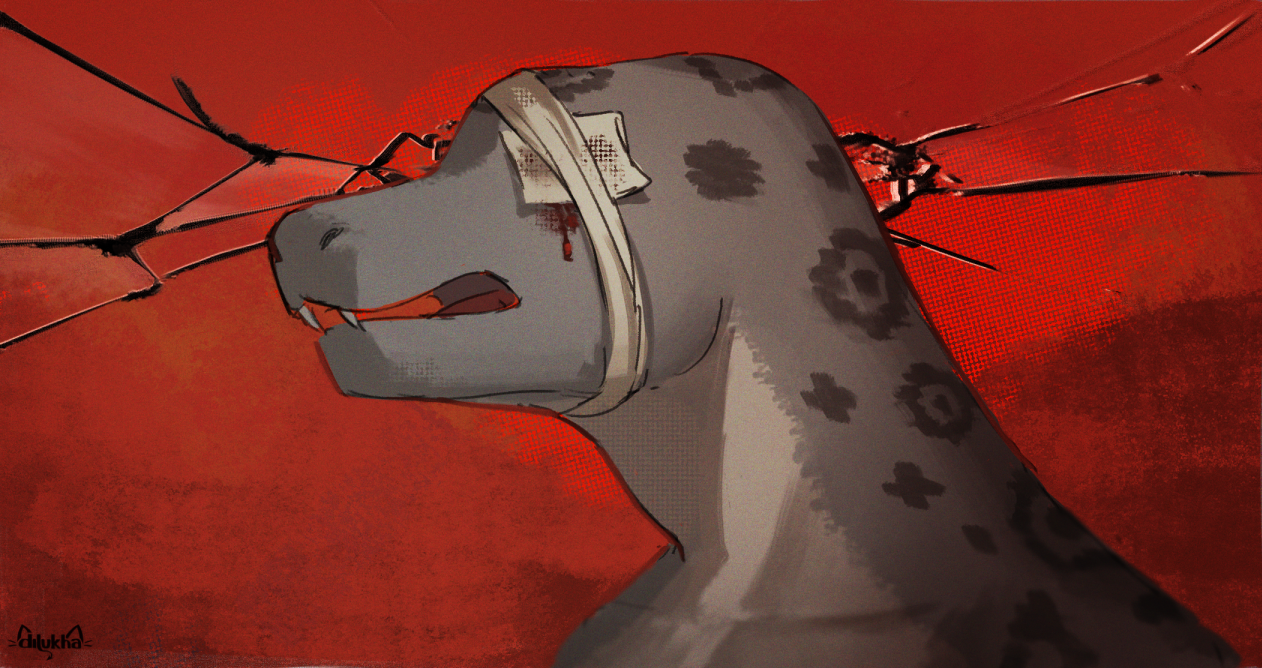 Oh good lord this is gonna be a long one. Most of my favorite lines are from later in the story so they might be spoilery but these are the ones that really stuck with me the most. Also not really dialogue, mostly narration, but I guess it counts too.

"The Panoptes swallows the knot in his throat, and ponders the value of his own words. The warmth that an earnest confession can bring. What does one lose in baring one's heart? At that moment, he couldn't think of a single thing." (Chapter 18)

"Each fear has a temperament of its own, and a song which soothes it and it alone" (Chapter 18)

"May you live long enough to toil and cry out, but never for long enough to enjoy any fruit of your labor. May your lineage perish, and may this world die with it." (Hinterlands 3 - there's something about all the vitriol in the Tapir's monologue here that really gets to me...)

"I wanted to hold him. I should, could, ought to - but it was one of those moments where one resigns himself to whatever sorry fate being a man asks of him, even when he knows it's for the worst." (Hinterlands 5)

"Grandpa sold his soul to the devil for love, didn't he? People died because of it - and so did he, when the weight of his wrongdoing became too much. [Storm] was looking at me with his sweet eyes, hands fidgeting as he waited for my reaction. [...] Guess it's true what they say: the road to hell is paved with good intentions." (Hinterlands 5)

"Is this really what you've sent my way, God? Must I follow the same path my grandpa did? I breathed in, held it... And as soon as I let it out, I knew exactly what kind of death awaited me" (Hinterlands 5, again. The hopelessness and resignation in this scene just hits so hard to me. In all honesty I could get this entire chapter tattooed permanently into my skin)

And last but not least,

"If anything, I think bein' gay is cool!" - (Storm,  trendsetter and ageless icon)

There's a bunch of other lines I'd put here too, but for some I don't have a save to reference the full thing quickly (like the "Will I ever turn to stone?" narration from the parking lot scene) and others have very explicit spoilers (like. Every Argos narration from Ruthless. God, why is Argos such a walking spoiler...) so they're left out for now. Also, honorable mention to the hummingbirds that just won't leave Asterion alone 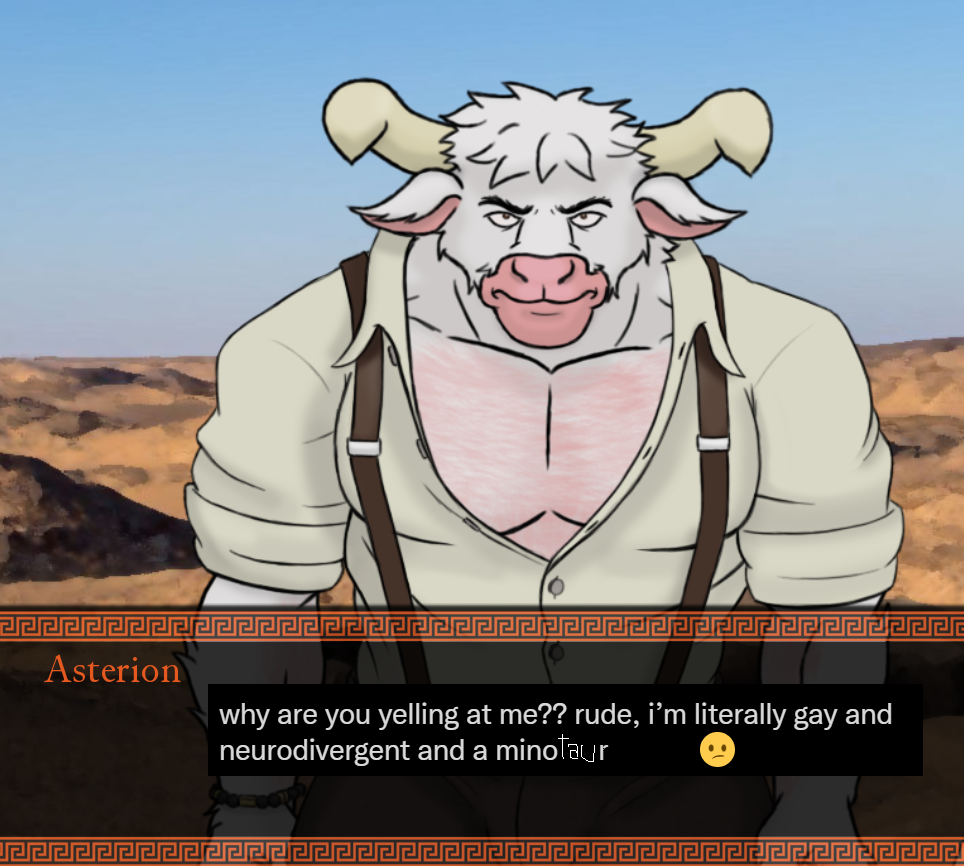 Just another busy day at the Minotaur Hotel 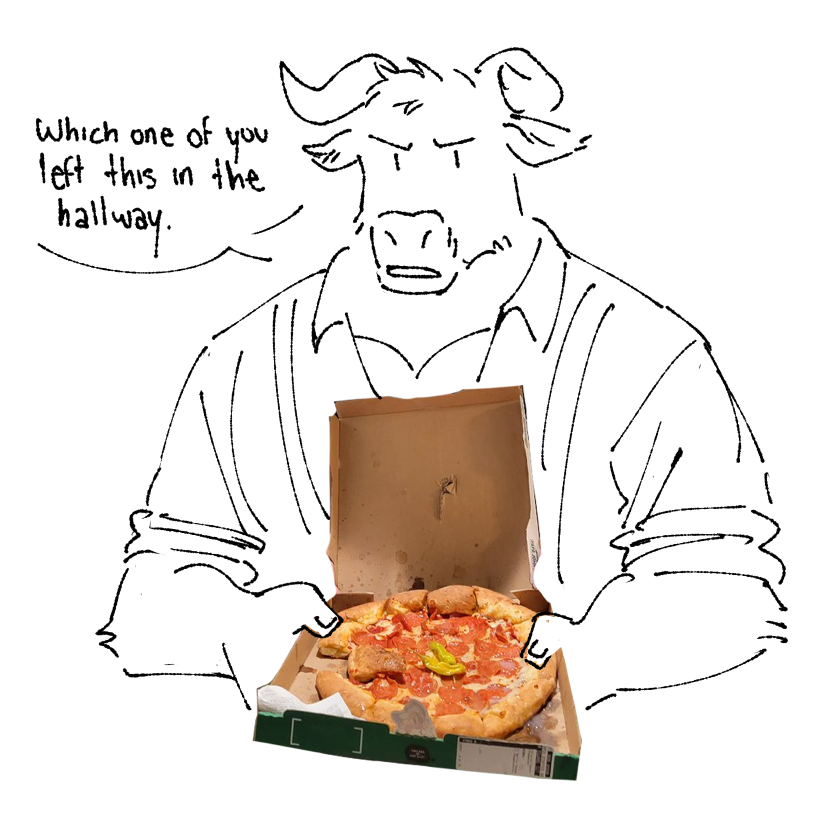 tysm!! save the compliments for when it's finished, tho.. P deserves only the best

Thank you so much!! I really hope I can finish this at some point

Yet another thing I don't know whether I'll ever finish. Considering doping myself with unholy amounts of caffeine next time I have to draw P's tail 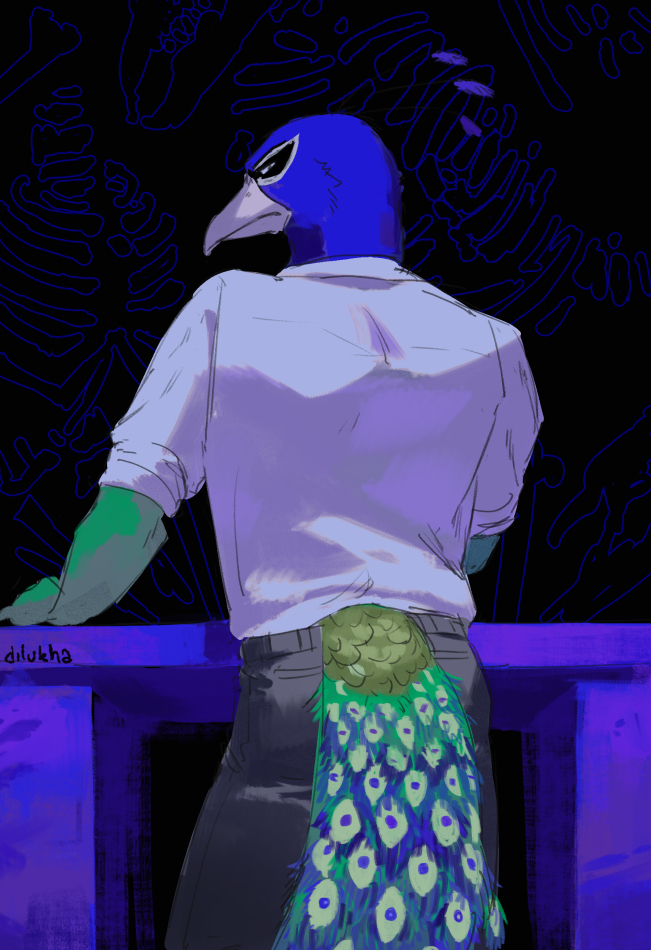 I think Jean is funny 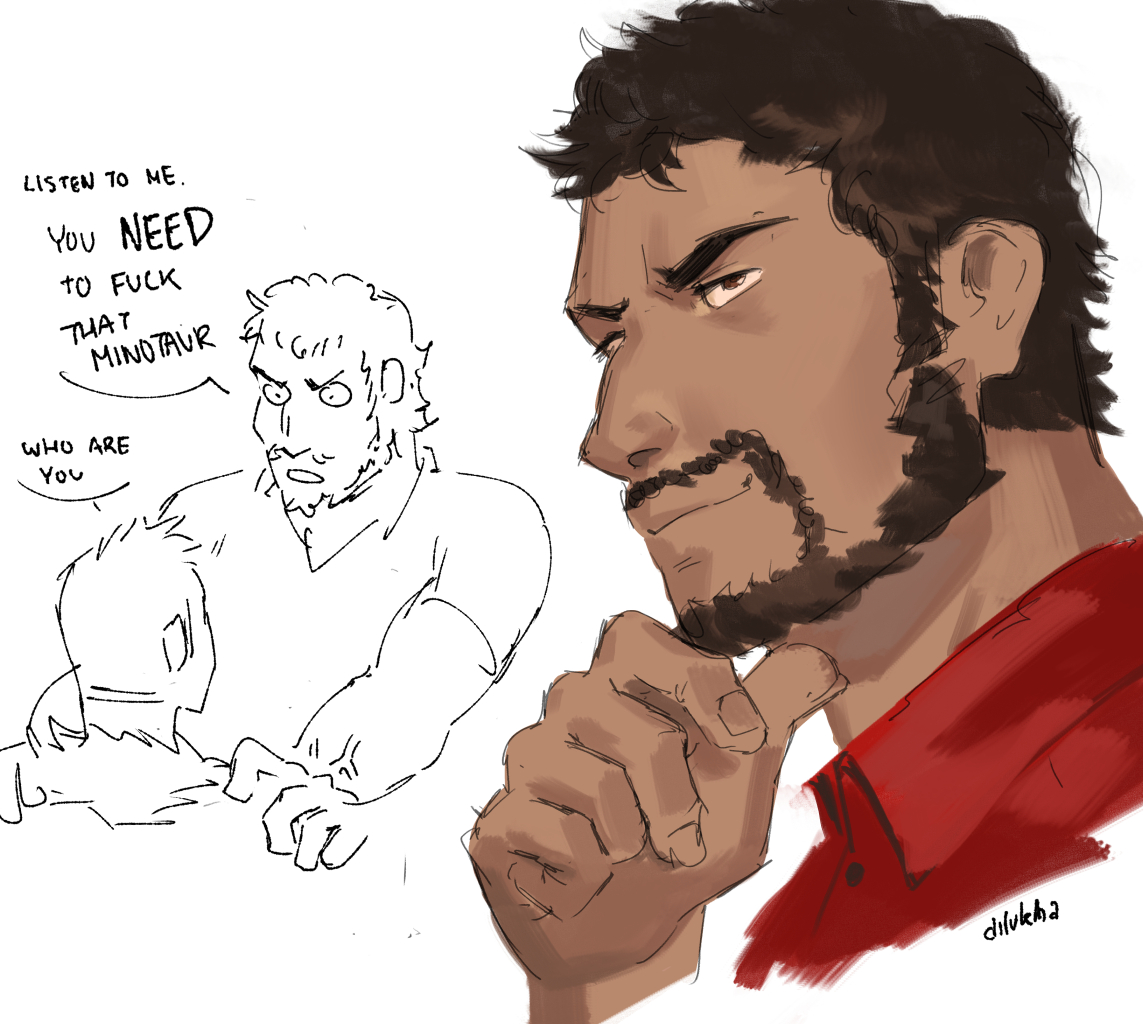 the cheese stain is the best supporting character in the Hinterlands, right after the Hail Mary mug 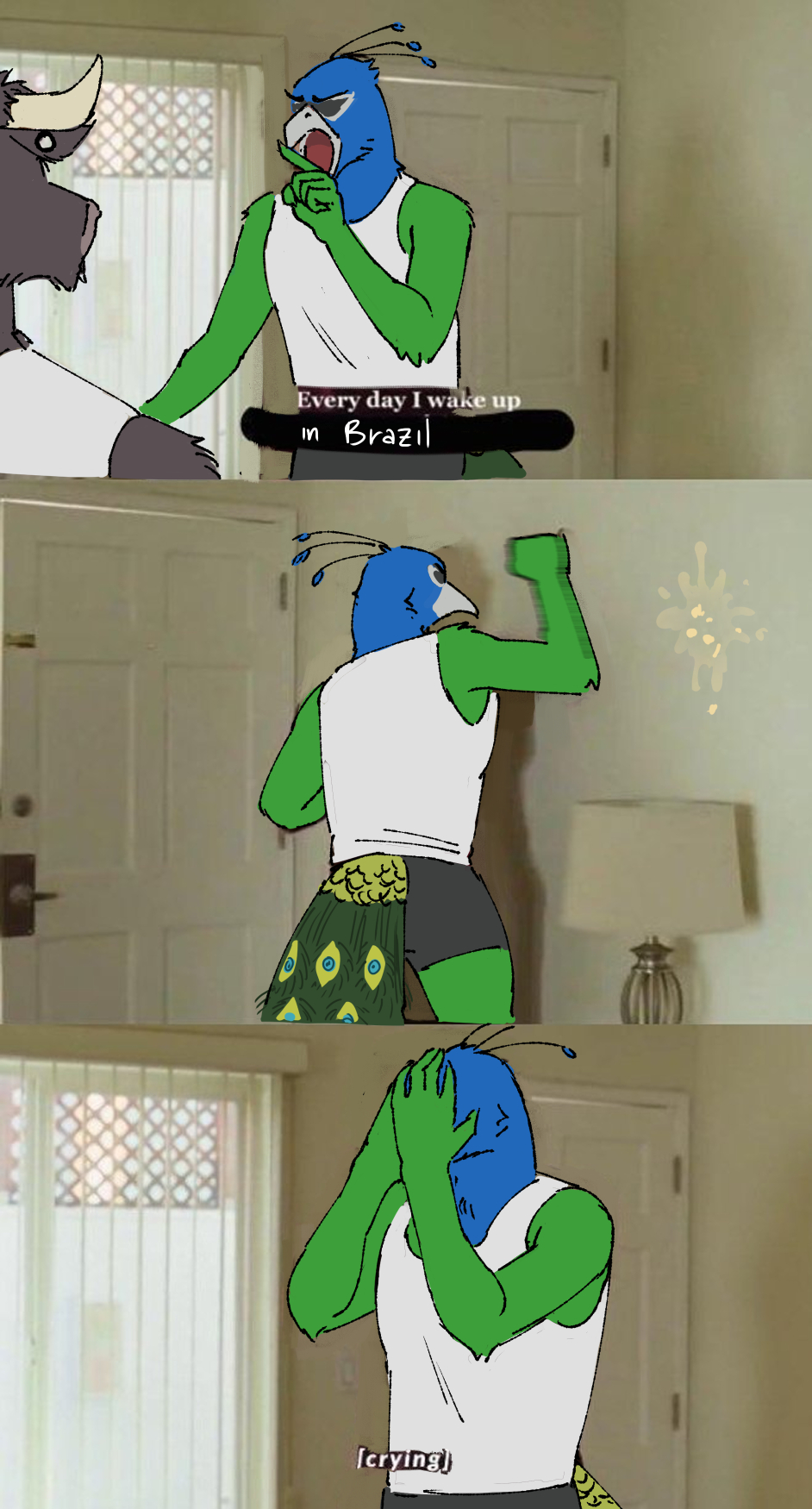 the thing I actually find the funniest is how the entire apartment only has two chairs and a console. true gamer setup right there

absolutely no shade to P but I couldn't help myself 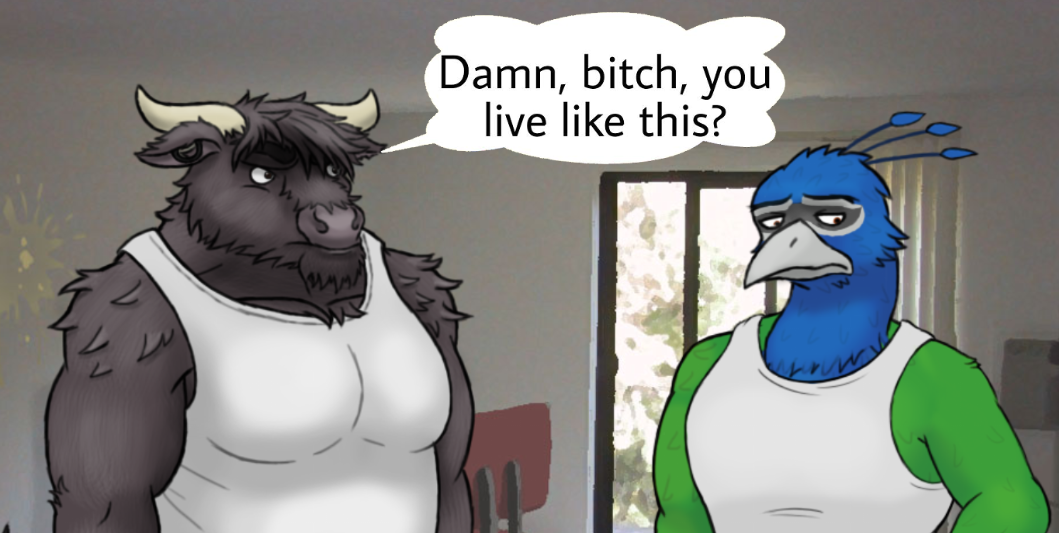 Ah, that makes a lot of sense!! The bits about the charm's workings are probably some of the most interesting parts of the worldbuilding imo, so I really like that you expanded on them here. But oh god, that thing with P... every new little bit of information that we get about Zezé just makes me more terrified of him. I'm really looking forward to see what happens with the whole missing children storyline, on one side because the scene in the shed is one of the best ones in the entire game, on the other because I'm just dying to know what the hell's going on. Hinterlands in general has me starving for more.

So I noticed something a little weird after playing the Ruthless Route and then replaying the Hinterlands, and I don't know if it deserves its own thread so I'm just putting it here. In all of the endings that involve P and Storm arriving to the hotel, there's a small scene where Storm gets scared when looking back at P, and that's what makes P realize that the hotel nullifies the effects of charms. That struck me as odd after thinking it over because up until that point I assumed that P and Storm could always see each other in their mythical forms, so if they walked into the hotel they wouldn't notice. I went back to check and there are indeed multiple points in the story where P comments on Storm's animal anatomy in public (him swaying his tail while he's in the tailor, for example), when Storm is very much wearing the charm. I thought that since their Oath of Kinship involved P physically giving part of himself, that whole thing was kind of a side effect. There's also a moment the first time they meet the Tapir god where P can't tell whether Storm's charm is working or not, so he asks him to check if it's active.

If P can't tell the difference between when Storm is using the charm or not, then why is Storm able to? Is that something only the rite master gets? But that wouldn't make sense either, because Storm alludes to P's animal anatomy many times too, specially the feeling of his feathers.  He also doesn't make any comment on P changing his appearance after getting within the confines of the hotel in ch. 18. Then how did he realize that P's charm wasn't working? Is there some kind of indicative, and if so why does P not realize until he checks his passport himself?  I know this is most likely a very minor thing, but I'm going insane thinking about it. Is there something I'm missing????

Up until now I thought that the narrator was Nemesis since her reveal during the Ruthless Route, but now that you mention it, it might be possible that there are multiple narrators, since there are times when they refer to themselves as a collective rather than a person. It would also line up with what Argos says about the Labyrinth having "multiple voices", though that might be completely unrelated phenomena.

Even so, I'm still inclined to believe that it's Nemesis who watches us during the whole story. There's some very explicit dialogue outside of the Ruthless Route that hints to her being the narrator (Ch. 17, after forgiving Nikos: "Oh, [name], what a fine art you make of this brand of justice! This ceremony of yours has been nothing less than the finest of hymns to our ears. Stay this course, and we may yet award you a fine pair of wings to match your fine-weighing scale."). The way she uses "we" is more likely a reference to her sisters.

No thank you so much!! I guess it's just because I like scalies a lot, but I absolutely loved his design from the first moment he appeared. Both that and all of his expressions are so lively. And that's without counting how much I like him as a character too. 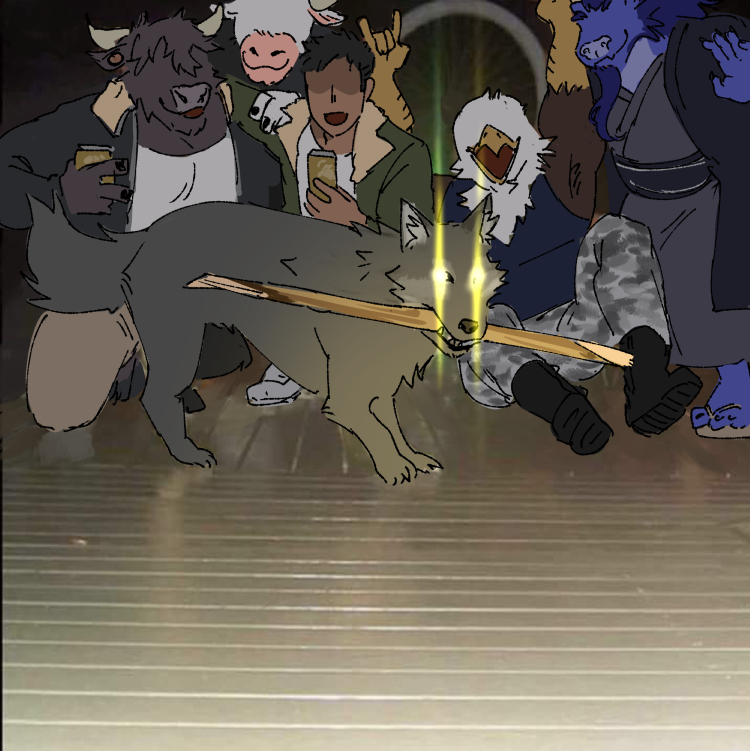 thank you sm!! and thanks for the heads up on the link too, lol

Finally finished my first actual fanart of the game.. Argos has not left my mind ever since That scene. Thank you devs for this wonderful story!! 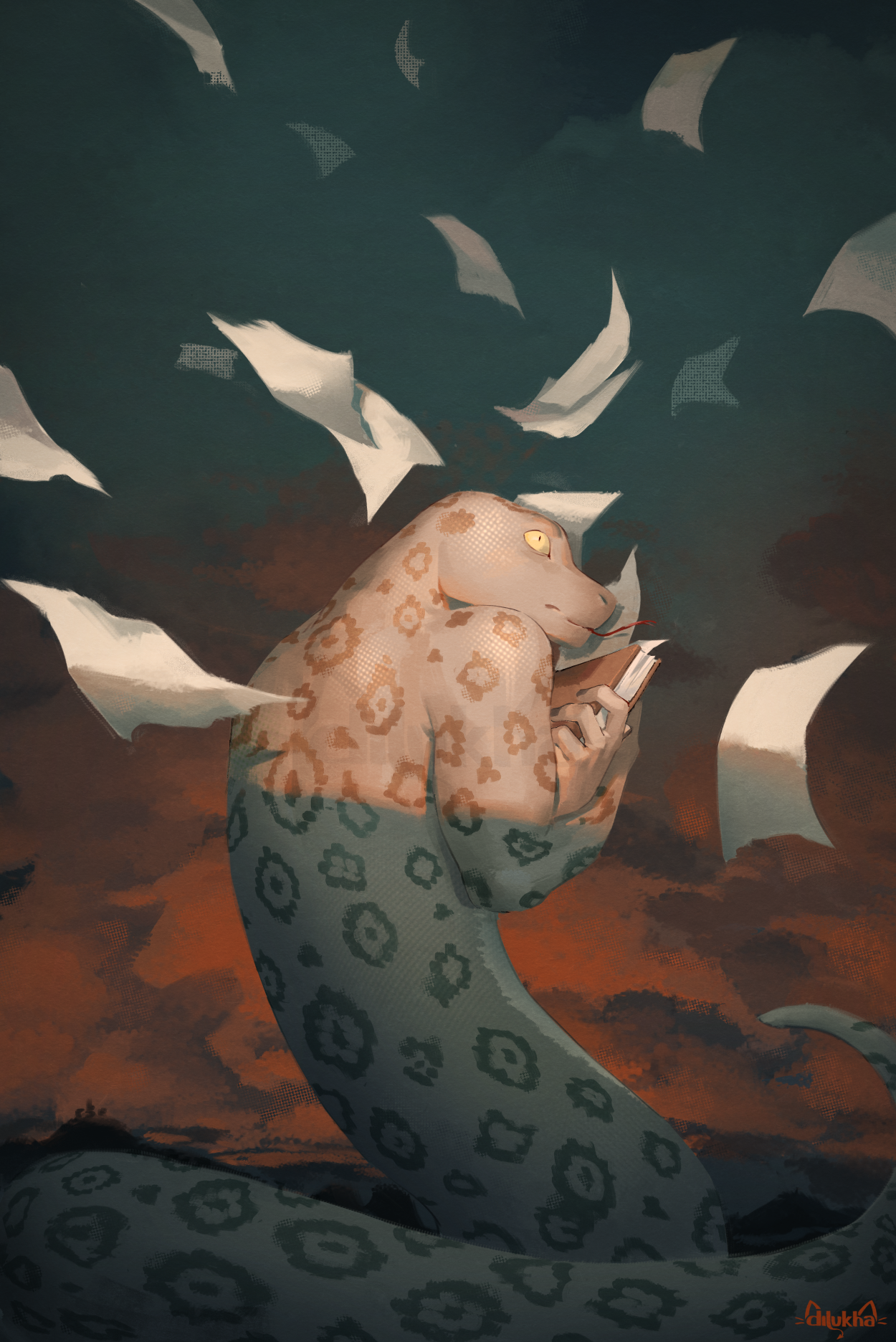 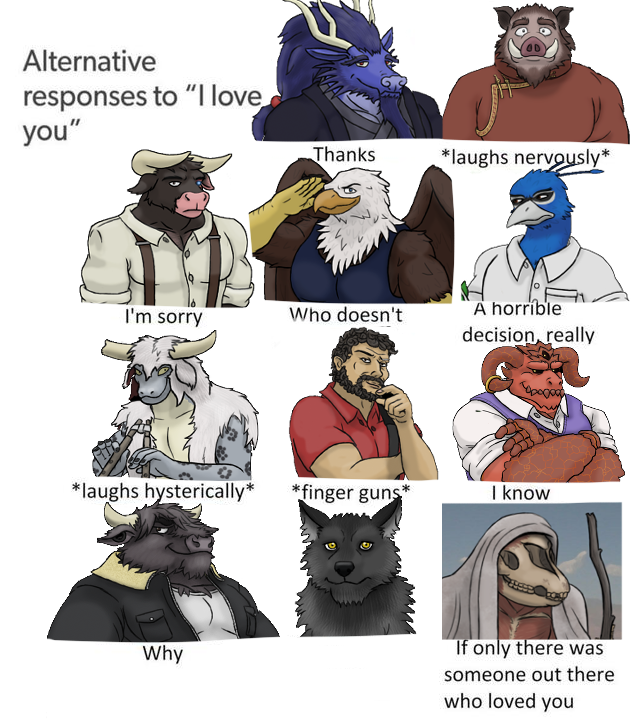