Very good impression overal. Gunplay and controls are already pretty nice, with some polish and refinement they should be perfect. Visuals are excellent and design is consistent. It's easy to tell one enemy from another, altough the tanky grey demon threw me off a bit the first time I encouneterd him. I took him for the regular melee guy.

There's way too much ammo on normal mode - more limited resources might result in a more tactical approach and more interesting gameplay. But it depends what you're aiming for.

The level design rewards exploration but it's perhaps a little too complex and confusing. I first stumbled right at the beginning because I didn't notice the ladder next to the gate. There were multiple times when I had problems noticing buttons and corridors. On second level I got so lost that I gave up. It's good that game lets you figure out stuff but I think finding a way through the level should be easier than finding secrets.

I like the katana alt attack - the cooldown would be a good idea to use it strategically, if there wasn't so much ammo lying around at player's disposal. Also - since katana has an alt attack, are you planning on adding alt fires to other weapons?

I'm not entirely sold on the bullet time. It sounds cool but I don't actually feel the effect during combat. It feels very random when it happens, especially upon killing last enemy in a fight. It might make more sense to have it as a colldown ability under a hotkey. And maybe if it for example turned hitscans into slow moving projectiles for the duration of the effect. Then it would make sense to put high damage hitscan enemies into the game.

I never once used dash in combat situation. I only used it for backtracking and obvious platforming segments. It could be a really good tool for quickly reaching high priority targets, especially combined with bullet time. If there were hitscan enemies dashing could be used to make them miss.

Enemy infighting is always a nice feature - something to consider:)

Spiders - adding small, fast enemies with tiny hitboxes to the game is risky - people usually hate them with passion. So keep that in mind and make sure to give the player some good AOE weapon that would make them lot less annoying:) And since you already have spiders, add some giant buffed versions of them for the sake of variety!

There might be some optimisation issues as well - Game runs below 30fps on my PC - which is far from high end but in the same time game does not seem to have dynamic lights (aside from muzzle flashes), ssr or any other expensive effects that would explain this.

is it possible to disable black color in a custom palette?

Hi there! I'm sorry I keep coming to this thread again but the reuploaded second fix didn't resolve the issue either. The left image is a palette with some gradient and grey steps and the second one is what happens when I filter it through the pixatool c64 palette. The palette section should have the exact same colors but one of the greys is rendered as purple and there shuld be 3 very distinct shades of grey - two of them have almost the same tone - you can se them in the gradient sction - There's black, dark grey and a very slightly lighter dark grey. medium gray is missing. My guess is that the medium gray has wrong parameters and this is why it's being replaced by the color purple.
I don't know if it's just me or does it also happen on other systems. Anyway hope this helps!

Thanks for the reply! Yeah it makes sense that looping animations would have some limits. but the same RNG issue happens with single burst animations that don't loop at all.

Ah, You're right - increasing the particle number value works. I thought it works the other way around and I was increasing the burst particles instead, my bad!

the GPU fix did help, thanks!

Really nice tool in general! I have some problems though:

- Something is wrong with RNG in render mode. It looks good in preview but when it renders the animation most of the particles are going in the same few directions.

- it feels like the burst doesn't work correctly - it should spawn all particles in the same time. Instead it spawns them one by one. Maybe I'm missing a feature.

- The app starts lagging very heavily when the color tab is on.

Doe this software support importing images and palettes by drag and dropping? Doesn't seem to work.

pixa tool doesn't support all palette formats. if I want to make a custom palette I need to find a software that can export the palette in viable format first. It's a very annoying workaround. if it's possible to add the color picker then I would really insist on adding it. It's a crucial tool for this kind of software. Or make it compatible with all palette formats. I used krita to make my custom palettes and the .kpl format is not supported.

Thanks for the input! there will be a new reworked demo soon.

Yeah, physics and control systems are still under development and we expect them to get better in time. The player speed and jump height was modified a lot during internal playtesting - this is why some parts of the level might feel off and feature unintended shortcuts - they were made when these setting were different. Thanks for the feedback!

Thanks for the feedback!
Game will have a save system of some kind for sure. Either checkpoints or quicksaves. Maybe both. Altough we think about exprimenting with something more connected to the gameplay - something that would reward the player for using the save option more sparsly.
floppy disks right now are sort of collectibles that indicate if you found all the secrets. Their function will probably change later in development.

Thanks for sharing your thoughts! We're building the game around more tactical gameplay, where resource management is a thing and where every weapon would be useful in different situations. At least in the beginning phase. If we make parts of the game a power fantasy it will require some buildup so the player feels like he earned it. At least that 's the idea:). We have some pretty powerful and devastating weapons and powerups in the works. We're also thinking about including different game modes and mutators that can turn the game into a more trigger happy experience.

Reply
Krankenheit community · Posted in The guestbook
david_kay1 year ago

Hi and thanks for the feedback! All of these issues should be addressed in the future one way or another. At this stage nothing is set in stone and a lot of things will change. Hopefully for the better. "Always Run" can be toggled with a hotkey and you can change key bindings in the options menu. propper save function is in the works. AI and movement physics are also under development.
Sword is tricky to ballance. if we make it more powerful it might reduce the usefulness of other weapons. The way it's designed right now is to make the player having to dodge bullets and attacks and not just stand in place when using it. We also plan od introducing some useful powerups that will make the sword more effective in certain situations. Player souldn't rely on th sword too much as this is a shooter game frst and foremost:) Altough there is a lot of playtesting ahead us. If it turns out to be fun enough we might make melee combat a bigger part of the game.

I dig the easthetics. Beautifully unsettling. It's a shame that interactive horror is a big giant nope for me. Brings too many chills down my spine.

Tested the new version and I got the exact same result as before.

Windows 10 if that's what you're asking

Cool, but I got the tool with the asset pack bundle, can you upload it there as well? thanks!

Color picker would come in handy anyway. I sometimes need a pallete with exact colors from the image and now I have to tediously recreate them with color sliders.

This is the result I'm getting with c64 palette: 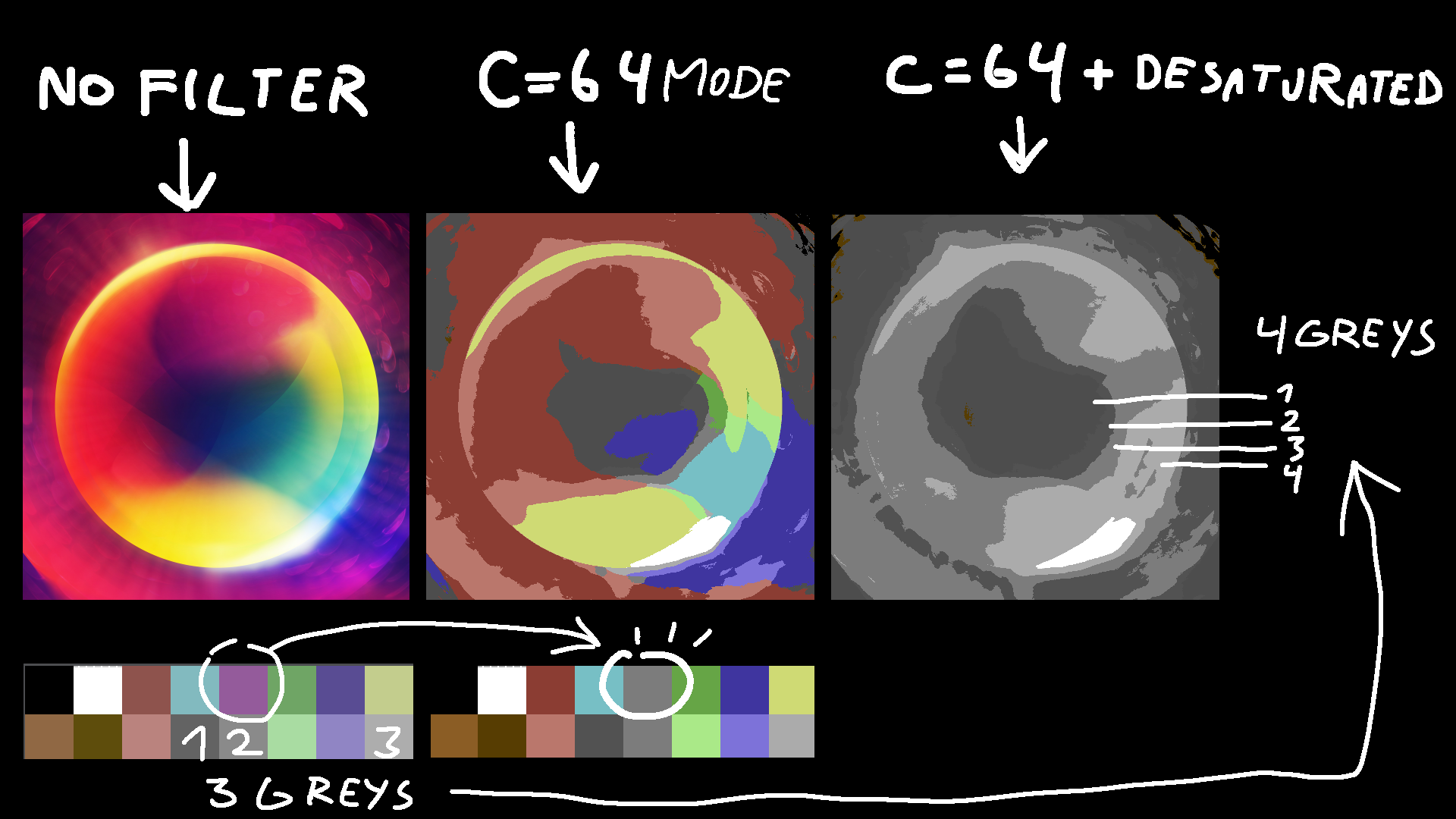 Does this version fetaure the color picker? the drag and drop image interface also doesn't seem to work anymore. Oh, and some of the effects like dithering and scanlines only have a correct preview on 1:1 zoom. But this was also an issue in older versions. The C64 palette still needs a fix. It has one grey tone too many and no purple. Aside form that the tool works perfect.

Can I have a small request for invert mouse Y axis option?

Awesome! I wanted to be sure about that:) We want to properly credit all contributors to the game

Hi, do you think we could use the Matriax8c palette in our game? We would like to implement a palette swap option, and this would be one of the options. Sorry for asking here but I couldn't find a way to send a PM anywhere. You can message me  @DavidKayConrad on Twitter.

I'm also having problems with exporting images. Both 132 nd 135 versions. 132 exports cropped image and 135 scales it down and displays on top left corner on the bitmap... I tried reinstalling and using different settings. Nothing helps.

I think there's a bug in C64 palette. It generates additional grey tone, just slightly lighter then the darkest grey.  And It desn;t seem to utilise the violet color at all.  Even when I import an image that is already in that palette all violet color is converted to blue.

Thanks that will come in handy! I guess I can work around the size limitation. Looking forward to future updates!

I like the tool but I can't see how you can setup a custom palette. Also, will there be option to load and save in any size?