This looks fun! Can't wait to play it.

Oh wow, I released this game a month ago... where has all the time gone?! Lol

Thanks! You can also say the name as "Cubix" for short if you want to :)

Thanks! It's just concept art, but I'm glad you like it!

Sorry I'm a bit late (I've been working on my own game) but congratulations! It's always a bit scary to release a new game (at least for me), but I hope you do great with it!

Oh wow, thanks for the support! I hope whatever you're working on also goes great.

First of all, have you checked on itch to see if it's uploaded? I know there's been a problem for a while where it doesn't change from "working" to "uploaded." Also, I programmed this like 2 years ago and haven't updated it since, so I probably should just rebuild it from the ground up.

Also, sorry for taking a long time to respond to you - I've been hard at work on a new video game!

Thanks! Yeah, I'm working on a secret, more ambitious project that I'll definitelyneed testing on.

I'm also thinking about starting a Youtube channel where I highlight the game's development, but I'm not sure about that one yet.

Anyway, I wish you luck again and hope to have many more good encounters.

Sure! Sorry I haven't already, I must've just skimmed over that part in the rules.

Thanks! However, you shouldn't downplay just how helpful someone reviewing your game is for its creator. It gives them not just help on what they should do next for their game, but also motivation. Nothing is better than me checking itch and someone gave a good review for my game. I can never give enough thanks to you for being the first person to review my game. Good luck with your next games, you deserve it!

No problem, I should be thanking you!

Thanks! Since you've helped so much with making Direct Ascent by reviewing it, when it costs money I'll give you a free download key!

Over a year of admittedly rather slow development is thrown together in release 1.0 of Direct Ascent! Dodge asteroids, space junk and more in this rocket-based vertical endless runner!

In the next week or so, the game will be put up on Google Play, the game's website will be updated, and a few other things will happen like giving the trailer although it'll probably be done a bit later.

Anyway, enjoy playing this game and consider giving some feedback along the way. Since this update won't be the last update for Direct Ascent, good feedback will for sure make a better game!

Well, anyway I'll stop ranting and let you download the game because also in a week or so, the game will start costing money to download ($5)! Enjoy dodging and I'll post again in the my game's devlog soon enough! 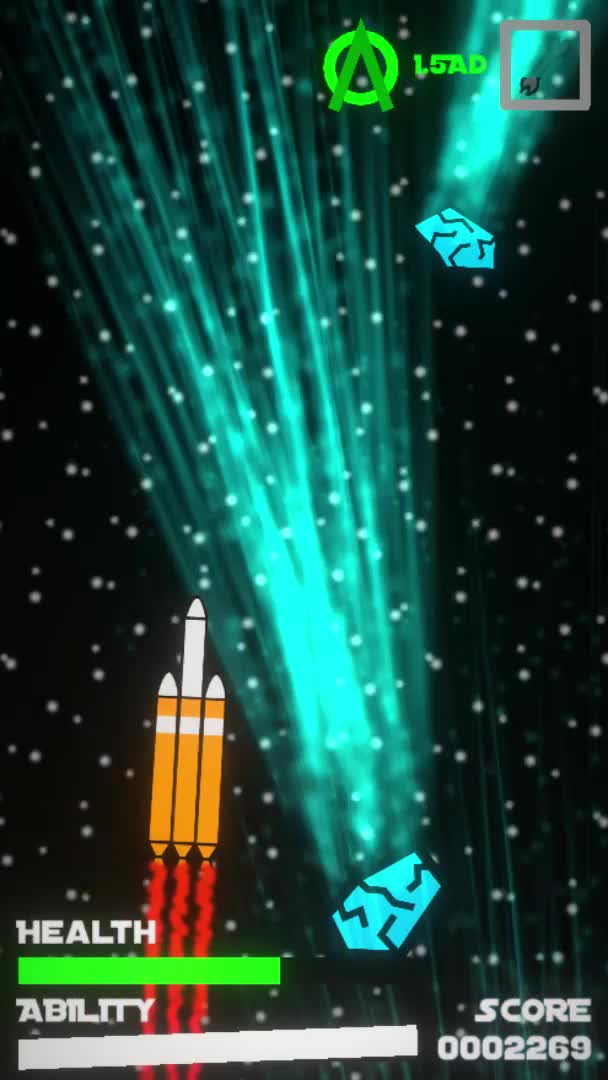 Sorry for you starting in level 5 - here's a version where that doesn't start you on level 5 as I was testing the boss fight then and accidentally left it in the release of the game! You don't need to make a new video about it (you can if you want, but no pressure), but here's a proper version of the game: https://we.tl/t-k2mgticIbL

Aaaaand that's about it. Enjoy buying new keyboards as you get smashed by black holes and proceed to smash your own keyboard!

Life was also very busy for me during the early development (October-Mid March) of Direct Ascent, so I can understand completely.

Hey, Groovy! How are your current projects going? Also, if you need anybody to do any testing for your games, I'm here to help!

Isn't it ironic that your "play my game" screenshot has text that says "go do some stuff instead of playing this game?" :)

It's been quite a bit since I've posted a screenshot, so I'll make all of the missed ones up by posting a gif! This gif is of a new snapshot that I'm releasing tomorrow (you should try it out I'm adding black holes to the game so obviously it's amazing link down below)

Ok ok the final boss fight will be a dragon

i added it lol

10 months later, and I can finally do something I have never done before: start a version number with a one.

That's right, the first snapshot for the full release, 1.0, of Direct Ascent is out! This snapshot (and the next one) will work on the new area, Cosmic Calamity. It is a much slower-paced level than the other four areas, but once it's finished, it'll take some precision to get past it.

Also, so that I can get your feedback on all the new features I'm adding to Cosmic Calamity, you start at Cosmic Calamity. You won't start at it after I'm done developing all the features.

Aaaand there's more! But you'll have to play it yourself to find the other features out. Give your suggestions in the comments section and the discussion board, and I'll see you on probably Friday with a snapshot finishing Cosmic Calamity!

Reply
itch.io Community » General » General Discussion · Posted in Will play your games and stream on twitch
CubeXGames1 year ago

Hi! I released a really big and major update for my game, Direct Ascent about a week ago. Would you consider playing it? Thanks! :)

They say the squeaky wheel gets the grease, but until now, that has not been true for Direct Ascent, my vertical endless runner with rockets - an entire cemetery of phones having been created for the people who tried out Direct Ascent on their phones only do discover they turned their phone into an air fryer. For anyone who had that happen to them, oops is all I could say.

UNTIL NOW! Last week, after releasing version 0.6.0, I made the decision to grit my teeth and remove the menace that is GetComponent One week later, and that goal has been successful.

Version 1.0 is next! Expect a lot more snapshots and progress updates as this update is going to have a lot of content.

Well, enjoy the update, enjoy an upcoming 1.0 roadmap, and make sure to put your feature discussions in the discussion board - it really helps when I'm not the only one deciding features for my game!

Link to my profile: honeyfun.itch.io

I have never broken so many mice in five minutes. 10/10

Cool! I look forward to playing it.

Hello! I just released a major update for my game, Direct Ascent. Would you consider playing and reviewing it? Thanks!

(I've been waiting to post a "play my game" again for when a new monthly post was created, but since the mods seem to not be doing what they said they would do, I'm posting here. Mods, if you're reading this, please do what you said you would do and create a "play my game" for August - not May!)