Very nice presentation, idea, and controls! Wow! It was very satisfying to fly around with the turtle with hyperspeed when I knew where to go.

I wish the FOV was larger though. It was often impossible to react to stuff because I couldn't even see it, which required me to play some levels many times just to scout and then memorize the layout, even when the execution itself was really easy.

Thanks for your comment!
Yes, haha,  I did.  I have to agree with you, sadly we had a too large scope which in the end left literally no time for polish.  In fact, I had to make all the levels in the last 40 minutes. Also there is a bug where the ship will move slower if your FPS drops below 60 x.x

I immediately started playing without reading how to play, as one does. Then I was stuck in the game with no idea what to do ;p

Super impressive how much functionality you got in there, and the game is fun to play & strategize

After around 100 points the difficulty spikes up hard, and I can't make it much further so far. Got 119, 146 seems crazy to me 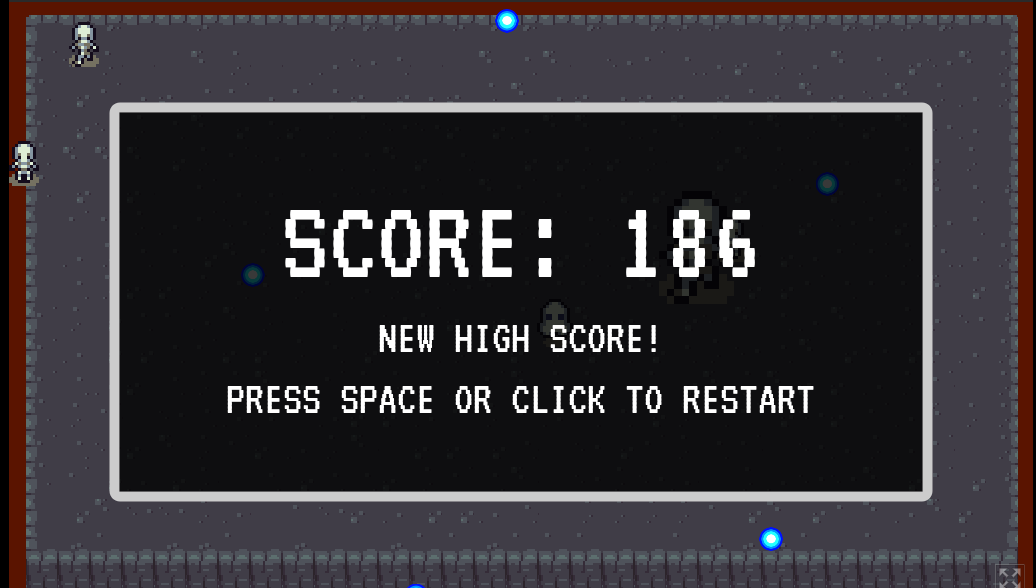 very atmospheric, I like it. Birds chirping, night sky with stars, and grass. What more could you ever ask for? By the way, even with a controller movement is flipped and also I jumped off the map

I think it's relaxing this way, but if you are not in the mood for that I can see how it would be more fun otherwise

edit: speed controls would have been a good addition, where the minimum speed is what speed the ship has right now.

Really fun. I love that room with all the pots, so satisfying to shove them. I was more out of control than my little green ball tbh hahaha.

Getting the green ball felt like it was mostly luck, though. Just grabbing randomly and hoping for the best.

This game is really nice so I'm not going easy on you with the comments:

I accidentally found out a combination that bridges over water, which I could use to complete earlier levels with ease.

I don't understand what the stars mean when a level is complete (I always get 2/3 stars it seems). I thought I had to collect the crystal to get the 3rd star but that seems impossible.

Would love a backspace button to delete one command as I mess up a lot.

I had a lot of trouble with turn left and turn right because it is xxz and zxx. I would expect them to be inverse from each other like zxx and xzz but that's just me.

Hahaha this game is so funny (and fun). Wish it was longer.

Like that there is a story. Would like that story in the description to be put in the game. E.G. after you complete the game, or parts of it for each level that is completed (if you had multiple levels).

Also when I was screwing around a bit while the map was opened with left click / right click, I at some point controlled both a rabbit and the player at the same time, which I'm sure is not intended.

Original concept, very well fit to the theme. Impressive that you made a whole dungeon generating system plus an AI to traverse it.

I feel like it is impossible to die if you just spam the three buttons. I stopped healing after 37 floors and survived until floor 54 with many healing items to spare.

Now these suggestions may be obvious but: I would suggest ramping up difficulty, a shop, and some more room for strategy behind when to use your items. (Also sound)

Fun, I like the gameplay mechanics and how it fits the theme. Would like some more challenging levels and possibly extra interesting mechanics.

One tiny bugs, when you stand on the red button and walk into a door (unpressing that button) you can get stuck in the door

Undo button is a great suggestion!

Awesome. I am impressed.

Fun, seems original (but I haven't checked many submissions yet), fairly challenging, a good amount of content and well polished.

One thing I am personally missing is some motivation for completing it. For example, an engaging story line.

love the graphics & style, but I am a little creeped out as it is late at night ;p

Hello, I am watching Tim Ruswick's stream from yesterday, and playing along every game.

I had a good time playing your game. I liked the screen-shake a lot. But I'm trying to help you so I'll focus on possible improvements:

I pressed 'R' by accident and lost my progress. Twice.

Shortly before reaching the end, there was a split, and I wanted to know both ends, but before I knew it I had already completed the game without knowing the other end.

The little chat can be a bit repetitive. At some point I found myself ignoring it because it was getting repetitive. Maybe you could add something that would unconsciously notify the player that he is seeing a message for the first time. An example: Only play the beep beep beep chat-sound if the message is new to the player.

Sometimes staircases are slow because the character is still falling from its previous jump when it reaches the next staircase step, making for a waiting-wallslide. Even if it is only by a fraction of a second, it still slows you down.

I hope you get something out of this feedback.