Wow I really like this one! For some reason it kinda creeps me out at times but I waited a long time for a maybe special ending! Didint get any tho.

Also I like that you can toss the people around in the elevator. Useless but cool

AND WHY CANT WE SEE OUR REFLECTION. another creepy thing

My biggest regret with the game is that I put level 5 WAY TOO EARLY. Its way too hard and doesnt fit with the other levels around it.

And that "it doesn't really suck because we joke about how it sucks" was added in at the last minute in  the dialogue,  and that wasnt really planned to be that way but I rolled with it as I was close to deadline. And I totally see how that can be disliked, I even kinda agree with you.

But thanks for the review! Its really appreciated!

Pretty fun! Its very easy but it was pretty cool! Great job!

yeah I shouldve thought about the sound lol. but thanks!

Hey I had some fun with this one! I really like the concept and its a pretty fun game! There were some bugs sadly, like squares not disapearing after a level, making me lose or win, but that didint really affect the game. Cool little experience!

I finished the game by the way, I edited it in my comments, but I think you saw it before I wrote it in lol. But yeah im getting so many issues cuz I played the game like 14 times at this point XD. also I think the soft lock happens when (and this is speculation) The trigger for the moustachio cutscene spawns into the player, instead of the player walking over it. thats my guess because when it didint soft lock, I killed the last guy outside of the saloon

so im re playing it right now and I gotta say the fixes are great but I got softlocked by the game. Moustachio wont come up the stairs to start the dialogue. I assume that its becuase I finished the shootout while crouched? Ill just restart but I wanted to let you know! EDIT : OH NO I DID IT AGAIN LMAO. ANOTHER EDIT : Tf it did it a third time and im not crouched. WELP LOOKS LIKE IM TRYING THIS AGAIN. Last edit : alright sorry for all of those but I dont wanna make 5 comments lul. I got the ending! Very cool lmao! And unexpected! Loved it!

heyy thanks! Means a lot!

Really cool little game, had some fun with it! I was way too invested in that intense story!

Thanks a lot! Yeah I wish I had made less parts needing plateformer skills but my puzzle making skills are pretty meh. Very glad you enjoyed though!

For the mustachio lair, I had killed all the red people and grey guys were coming out. I had taken all my whiskeys and was very close to being able to take another and save myself (On the second table on the left) but sadly got sniped right as I was taking it. And for the ending, ill be looking out for the balance update and replaying as soon as its out! Sorry if I made typos I'm on my phone rn

I played trough it, and really loved it! I think I laughed too much, and that ending is just so PERFECT. Its definitly the best game I played trought yet. The biggest problem I had though was that I kept tabbing out of the game while trying to aim. I dont know if its my computer, unity or the game but my mouse never stayed in the game, went in my second screen and made me get hit a lot.   Also,  after the  car factory (which I had uncovered in the first level and I was so proud thinking it was a secret lol) where to go is really unclear. I went arond until I figured out the right path.

There is also some really minor things like the fact pressing R on level 1 makes you watch the (amazing) cutscene again. But thats not too bad considering I only did it cuz I missed some of the controls. And theres a typo in the sentence  "are you curious about he's doing with the button". but none of that takes away from the great experience! Great job!

Its a great concept but its very hard to use. I really liked even tough its very hard. And THANK YOU for letting the comment saying you had to jump to the level select button because I could not have done it without that

I cant seem to open the game. Im on windows. Id love to play it!

DAMM thats a really cool game! It has so much content and even though it has the SBIG style it doesnt feel like a game jam game! I can see you worked hard! The voice acting is great, the fallout style is great, the animations are out of this world. BUT I do have some problems with it

Its so hard lmao. Im clearly not good at it but because  the  ennemies are hitscan, they're really hard to fight. Those grey dudes do WAY to much damage. The amount of whiskey you have is not enough lmao.

PLEASE PUT CHECKPOINTS. I had to re start the game way too much because I kept dying and that made some of the funniest jokes (the slow walking at the start and the horse coming in from very far) SO TEDIOUS. after like 5 times I sadly decieded to give up (in mustachio's lair) because of all that. I am very sad I didint get the ending but ill probably come back to it later

last point is that you start with a whiskey but then when you go to the gun counter and take the other wiskhey it keeps you at 1. Totally useless thing to point out but hey. its a thing!

With some balancing this could be my favorite game of the jam yet! Its hilarious and very fun. Great job! You deserve more ratings!

Its an ok experience but it doesnt really have any personnality and doesnt really fit the theme of the jam. Or the modifier. but its pretty fun!

Honestly the best concept for a game . Terry the Echidna is now my favorite video game character.

Sadly not knowing if I was gonna land on the plateform because of  the camera gave me anxiety. And it did take me a little bit too long to figure out I had a double jump lmao.

A part from that and the occasional phasing trough the blue plateforms, I had a lot of fun!

I totally finished the level and didint spend 5 minutes clicking the button trying to figure out what I had to do. 10/10 a true game for gamers

Thanks! Means a lot to me! And sounds were the last thing I implimented, while not having much time left, and the volume level was not something I was thinking about so sorry about that  😬 but im glad you enjoyed!

its been like a year but i just realised ur talking about the dude in fnaf. ok thanks

i tought it was a virus for 90% of my playtrough , but i realised it was a masterpiece "triple a game" for the last 10%. totally underated.

Way too hard for me 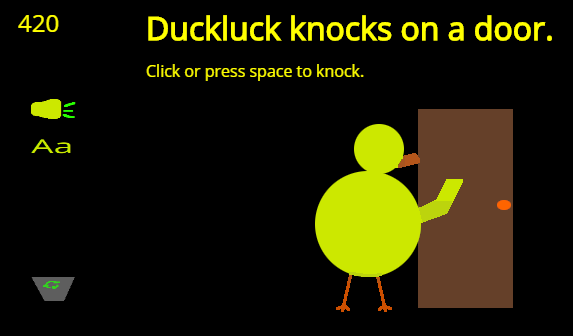 wath did i just witness. I mean i liked it. but wath?

I never played a game so good in my life. Plus its so relatebale. Spent 10 hour on it. I hope you win.

(sorry for my bad english) So I am trying to make a point and click horror game in game maker studio 2 and I made this (very) little pre alpha for it. It would be cool if could check it out, its 2 minutes long. (I made it in one day lol) Its free and not THAT scary even thought it can give you a little spook :) I will uptade it soon