This is a very interesting mechanic, though as you say - 100d6 is a hell of a lot to manage!

I've been given another suggestion via Chris Sims on Twitter that I wanted to share, along with one of my own. Chris' is:

Start with 9 tokens. When instructed to pull from the tower, instead roll the die. If the die shows 6, you lose one token. If your number of tokens falls to between 5 and 2, you lose a token if the die shows the number of tokens you have left or a higher number. When you have one token left, you still need to roll a 2 or higher to lose a token. So, for instance, if you have one or two tokens left, a roll of 2 or higher causes you to lose one token. When you lose your last token, the “tower” falls.

That led me to what may be a simpler mechanic. Start with a counter that you set to 30 (the average number of pulls in a Jenga game - but you could set this to anything you like). When you're instructed to pull from the tower, reduce the counter by 1 and roll a d6. If you roll equal to or higher than the counter number, the tower falls.

Realistically you don't start rolling until the counter hits 6, obviously.

Reply
Speak the Sky2 years ago(+2)

Yeah, that's why I say to use a dice-rolling website or discord dicebot—the number of dice doesn't really matter then.

Here's how Chris Sims' idea works out in practice: 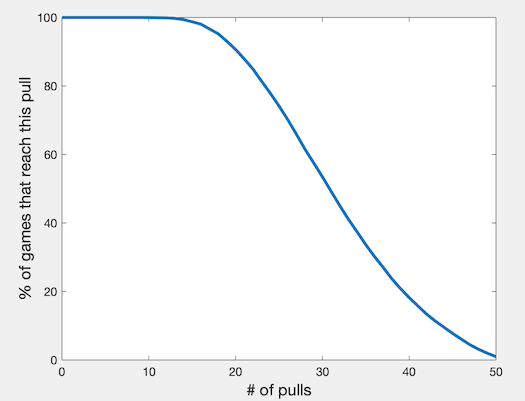 It gives a good curve of average results, with a difference in the story it tells in each game:

Where the 100d6 mechanic usually has a drawn-out tense ending, the token mechanic sharply curves to the end with a sudden disaster (because the probability of rolling over the number of tokens increases as tokens decrease). It can also randomly plateau earlier, like a moment of stillness, calm before the storm. It might be more swingy, but I'm not sure.

I think I still prefer mine, since it's both simple and dynamic, but the others have their advantages if people want a different story progression, more control, or for the mechanic to get out of the way until the final stretch.