Submitted by ladroid (@ladroider) — 2 days, 2 hours before the deadline
Add to collection 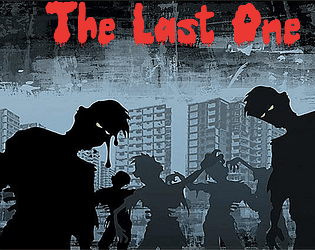 How does your game utilize the limitation and theme?
There are no restrictions in the game itself, but the site has tags by which the user can understand the topic.

If you did any of the optional challenges, explain how they were used:
The game itself uses automatic world generation or it is also called procedural generation using the Perlin noise algorithm. Moreover, two shaders were implemented. The first shader to create the fog and the second one to create the rain. Thus, the game becomes more interesting and epic.

I enjoyed playing with it for a short while but there needs to be a goal or something to play towards to make me play for longer. I collected the things but I couldn't use them and didn't know what to do with them.

There are some bugs  that if you could fix would make the game much better. Also some improvement tips:

Sprite layering order has some problems. The player will often go under objects that he is not supposed to.

Zombies spawn on top of the player or very close to the player.

Zombies can get stuck on invisible things. Maybe on the ground, I don't know but sometimes they get stuck.

Player can leave the play area and the camera doesn't follow. A simple invisible wall could do the trick.

Player turns too slow. And since you don't shoot where your mouse is but where the player is turned this makes aiming very hard.

Instead of leaving with a button if you could leave through the door that wouldn't be this weird.

Zombies spawn only in a corner of the map and the rest of the map is empty. Also zombies are no challange to dodge. Maybe make them faster.

If I could shoot with holding the mouse button down that would be better.

Anyways, keep improving! It doesn't need a lot to be a great gamejam game.

Thanks for the comment. Some bugs have already been fixed, there was not enough time to fix everything. Soon will appear a major update.

The proc gen is a neat addition, it's impressive to implement that in a jam. The inventory is also impressive. I have some feedback though.

And of course there are a few things that the other comments mentioned like SFX for guns but it's forgivable because we only had 1 week.

Thanks for the comment. Some bugs are fixed, there will be a major update soon.

LikeReply
Opossum In A JarSubmitted310 days ago

Great use of theme and restriction. Audio was very good as well, I only wish there was a shooting sound to make it complete! Why are some assets filtered though? Also, you can remove button focus (the blue outline) by going to Custom Style > Focus > NewStyleBoxEmpty.

Thanks for your comment. I’m thinking to fix some bugs and make a major update.

The great sounds were really immersed in the game! So much so, I couldn't hear any! The game play was rigorous, though not in the way that makes games fun. I collected so much chicken, but couldn't for the life of me figure out what it was for. Oh, and the radio worked just as well as the rest of the game; that is, not at all!

The collisions and movement were a little off, for example i couldn't move north-east or south-west at the same time at all, and i wish the turning was a little faster. I believe if you had a little more time and added sounds and maybe some juicy effects like screen shake, it'd be a totally different game. Other than that, good job!

The collisions and layering are a bit buggy. Other than that the game has a great atmosphere! the random generation is also impressive! Great work overall!