This is a Game where you have to take care of the tree from the bad creatures and enemies.
Submitted by anantsachin — 12 days, 22 hours before the deadline
Add to collection 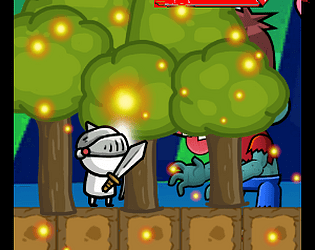 That was an interesting game. Really liked the ability to double jump, it made dodging the enemies a bit easier! I have to confess, I actually exploited a bug in Level 3 by jumping over the zombie's heads (with the double jump!) and then getting them stuck in the terrain so I could actually kill them and get to Level 4, which I was super excited about :pp I couldn't make it past Level 4, unfortunately.

For future games, I really recommend doing some playtests with your friends/family to get their feedback on the game! We personally managed to do one playtest for our game, and it helped us a lot. We made a few changes to our game according to the feedback, and those changes were for the better. Sometimes you think the players will interact with the game in a certain way, but they end up doing something completely different. Which is why playtests are so valuable! They provide a different perspective for the game.

Good job on finishing the game for the jam! Out of curiosity, how many levels are in the game?

Good luck in your future projects! :)

thanks a lot for your appreciation! You are are right play testing is very important I will surely do it in my future game :)

I enjoyed this premise and would love to see a more polished version in the future! I could not for the life of me get past the collision with the enemies on Level 3, so I couldn't finish the game unfortunately. That being said, I think it has the bones of an awesome action game! I'm Youtube-ing what I play from the jam, so if you like I could link the vid when I'm done!

Hey! I saw your channel video from discord I am glad that my game is in your video. Thankyou very much I will keep improving my games in future.

Yeah, the enemies are floating and I missing some feedback, I died and didnt know i was dying. Those issues you automatically fix when you do more games, and more and more. Good luck!

The enemies are really buggy and the combat system is weird and I think the camera doesn't work as intended , but you have very cute graphics and backgrounds.This is a really good starting point for game development!

Thanks for your feedback i will improve my game :)

i would put some more work into this you still have 8 days before the deadline but right now it is hard to feel enjoyment playing the game because you can not get a sense of you or the enemies attacks properly / the damage numbers are unreliable and hard to maintain surviving / the enemies  sprites are constantly flipping , keep it up though just needs a little love hah

Hey thanks! I know I made this in just 2 days because it makes the game jam a proper game jam.

Hey! I think the implementation of the damage was a bit unexpected! I'm not sure how to do damage reliably or how to not get hurt like a ton at once. A cool little platformer though! A little polish, maybe some sounds, would be really neat!

Thank you very much!  there are sounds on downloadable version of this game.

Hey. I made a video about the Unexpected Jam and decided to include your game into the video. I like it. I had some bug tho. It felt like the time in the game went very quickly. I could not control my characters normally. I am sorry if it is the point of the game. If you want me to cut your game out of the video, let me know. However, if you like the video, I make videos for such developers like you every day. I will be happy if you subscribe. Anyway, I had a lot of fun playing your game, and I am looking forward to playing more of them.