Turn Based Jam (8 Bits to Infinity)

Maya leaves her home and life as a lowly baker in search of a greater destiny.
Submitted by jaydalyn — 2 hours, 45 minutes before the deadline
Add to collection 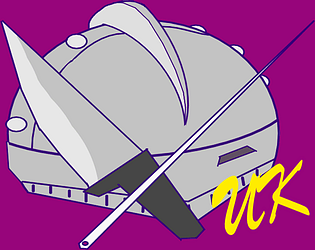 I like the presentation and your emphasis on  the story!

Not sure if this is the same issue Trevor was running into, but there weren't any characters in the fight scenes, just their stat boxes at the top. It took me a bit to realize I needed to click on the boxes to do an action. I appreciate that you added in a way to continue with the game to experience all of it even though some of the fights were impossible.

One other issue I ran into was Juice Grandma, Caravan Lady/Son, and Castle Knight names were too large and overlaps with their dialog in the cutscenes.

(Edit: I forgot to mention how cool it is that you have a fully functioning save, auto-save, and quick-save system implemented)

There are only stat boxes. In my eternal 'wisdom' I decided that the character battle sprites had to be animated, even though I've never animated anything other than a bouncing ball before. I way underestimated how long a simple idle animation would take, and I had to drop the sprites to have a game ready.
The fight with mom is meant to be a tutorial, but since there are no specials I figured it wasn't needed yet. Now I wish I'd at least put in a box saying to 'click the stat box to attack', especially if that's the cause of everyone's problems. When you're the one who made the game everything is obvious to you, I'll do better about putting myself in the player's head.

The saving system is in Renpy by default so I can't take credit for that.

Thank you for your feedback, and thank you again for playing.

Knowing what a player won't understand is one of the more difficult parts of game dev, but the great part about Game Jams is they help you figure these things out and play with them :)

I ran into a bug on the first fight. I could see the background, but nothing else and only the end turn button so i could not fully experience your game.

I had the same problem.

That's odd. I'm not sure what the problem is, I just tested the game on another computer and everything works for me.
The only thing I can think of is maybe there's a problem with the mac build? I have no way of testing that one.
Sorry that this didn't work out for you, but thank you for trying to play!

Same problem here, on the windows build though. That sucks, it looks like it could have been pretty good.