VR CCG Roguelite where you fight back an alien invasion to get revenge for the devastating attack on Earth.
Submitted by Micreps (@MicReps) — 1 hour, 43 minutes before the deadline
Add to collection 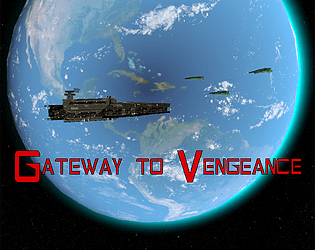 Description
This is a prototype. It is very buggy still, but should be playable through a battle. The idea was to have an FTL gate between levels, but was only able to get one level in so there is only one gate at the end.

To play, select either an attack card or defend card. For attack cards you then select an enemy. Then press the red button. You can play 3 cards a turn before your energy runs out and it is the enemy's turn.

Known issues:
The shields visuals will not turn off after shields lowering to 0(for both player and enemy).
Ending gate is all jacked up.
Sometimes attack cards don't reset correctly.

It's a really cool concept! Totally understand it's a quick turnaround. Things to think about as you continue to work:

Visuals are really cool, I think you could definitely go all out with some effects and have it feeling really good (especially with some more audio). The first time I used the shield card I started to picture what a fully juicy game could be. I know it's supposedly bad VR visuals, but i think a TEEENSY bit of screenshake (or even just shaking the ship below you and not the player) would go a hugely long way.

For the game design, it's obviously crazy to balance a CCG in 48h. I'm not a big card game player, but it seems to me that just adding one more thing to keep track of would really bring the strategy alive. It seems like there's the beginnings of an energy system there, so even just adding a Charge card to add energy for the next round and allowing for multiple cards per turn would be amazing. But I'm sure there are plenty of great examples from the CCG world.

For tray-table-ability, this really fits the bill! It would be cool to see an iteration of the control scheme where you could actually hold your cards and push the big red button with your hand :)

Fully fleshed out, I could see this being an awesome game for a long flight. I can't wait to see where you go with it!!

Thanks for the feedback! Yeah, audio would definitely help big time!

For the other things you mentioned I had at least briefly thought about most of them. Definitely want to have another control scheme where you actually hold the cards and whatnot, but figured the control scheme I went with was better from a tray table perspective.

I for sure intend to add more cards/powerups/buffs/debuffs/enemies/etc in a full game. More planets and locations as well.

I like the idea of shaking the ship when you're hit. Between that and audio I think things would feel better without even adding all that much.

Thanks for putting together a great jam! +1 vote for a week-long jam next time! :)

It is still very buggy, as you already stated. I tried 2 times and after I destroyed one the ships, the turn would not complete and neither of us could play. I could still move the controllers and click everywhere but my turn would not end. I tried everything.

Even with that, the battle is very engaging. I can totally see myself playing this game for hours while on the airplane seat without bothering other passengers.

The graphics are really good! Great effects! The clouds on the planet gave me the impression that I was moving. Did you make this all by yourself?

Anyway, please continue working on it. This game has a lot of potential! I hope to see future updates from you! Great job!

Thanks so much for the great feedback!

Interesting that you ran into a complete showstopper bug. I had not run into one in quite a while, but there are a couple bugs that at least appear to be showstoppers and maybe I've just figured out exactly what order to click stuff to get it going again through my testing. Anyway, yeah, lots of bugs. The game loop needs to be cleaned up a ton. I was just thrilled to even get something resembling a game loop done in 48 hours. This was my first jam even close to that short of an amount of time. Also, this is basically my first VR game, before this I only worked on a small demo for a couple days that I never finished/released(it basically just had a genie lamp that you could pick up and rub the side of then a genie popped out, nothing resembling a game like this one). Excited to be working in VR as that is one of the reasons I decided to learn Unity!

Audio would go a long way I think! I had hoped to be able to add it yesterday evening, and probably should have prioritized it better. I got stuck working a bug that I didn't even really end up fixing. I probably need to get into the habit of adding audio as I go, rather than leaving it to the end of the project to do all at once.

Glad to hear you found the battle engaging! For such a rough version of it that is very encouraging! I think once more cards are implemented along with the deck building, power-ups, more enemy types, better AI decision making, and cards being shuffled/randomized, it would be all the better.

Thanks for the comment on the graphics. I have been focusing more on level design in Unity over the past few months than coding so I've been getting better at finding the tools and models that I need and utilizing them. Also have spent way too much money on the Asset Store the past few months so I have a nice library of things to work with when I need them. (Here's a WIP video of the other project I've been working on recently, although this video is more focused on the car driving than the level design...):

For the planet, the base Earth model is from GameDevHQ's Filebase. Really great resource with thousands of assets that are super easy to access and download through a Unity plugin. A lot of the other models are also from Filebase including the space ships, the cockpit, the chair, and the terminal(although I modified the terminal model to remove a center piece). Pretty much everything 3d model-wise was from Filebase I guess. I sound like a commercial right now, but I think Filebase is the best tool I have and is a bargain at $99/year. They add new assets weekly as well, so it just keeps getting better.

The clouds and effects around the planet are from an asset on the asset store called Next-Gen Planets. I had originally bought it for another project but never ended up using it until now. I will definitely be leveraging that again more in the future as it is super easy to set up, and has a really cool shader that controls the atmosphere around it and such as well. I only really scratched the surface, but if I am to expand on this game, then almost every battle will have a different planet nearby (the plan is to work your way through branching randomized paths out of our solar system and then have some alien planets beyond that which I can get kind of crazy with). Also a big shout-out to this asset for having standard, URP, and HDRP all in one package! That was definitely nice to see (this game is in URP).

Again, thank you for the feedback and encouragement! I definitely think I will continue working on this one as I have a lot of ideas for it that I obviously wasn't able to get into it in just 48 hours.

I will give your game a shot tonight on stream (with no viewers most likely, lol) at https://www.twitch.tv/micreps along with the other windows build game. And then I still have to figure out how to get .apk's loaded to my Quest to try the other games out later this week.