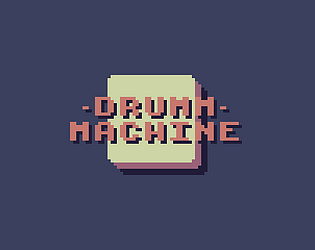 This is cool, it made me do a little jam session. Hope my wife did not here me grooving to my beat ;)

Just as an FYI: as packaged this seems to require a relatively recent Linux distro version.

For widest compatibility targeting LTS 16.04 is often recommended and LTS 18.04 is still officially supported but most CI systems seem to default to LTS 20.04 these days.

Of course, Wine ran the Windows EXE quite happily which pretty much says everything there is to be said about the state of Linux + Python app packaging/distribution these days! :D

The Linux version was packaged in Ubuntu 21.10. You may need that version or higher, although I don't know for sure.

I had fun playing around with this! I love the look and it's very responsive. I found the one-handed controls a little uncomfortable but I made a quick autokey script to rebind them and it was smooth sailing from there :)

I redownloaded it a third time, and it works now! I have no idea what happened differently, but apparently it works. This was really fun to play around with. I do composing work from time to time, so I'm familiar with drum machine plugins and found this very easy to use. The old A > E > AS > E sounds as good as ever (though I'm used to it being on the top of bottom keyboard rows, haha). Was this an 808 or a custom collection of drum sounds? The sound is pretty nice.

It's a shame that you can't test the program. I will try to fix the problem once the game jam voting is over.

What operating system do you use?

Edit: I tried again and it works now! Not sure why, but at least it does haha.

I use Windows 10. The app itself opened just fine, but the moment I pressed a key, the error appeared.