Crawl a dungeon where the more pent up you are the more exciting it'll become!
Submitted by SmutWritingDragon (@smutwritindragn) — 2 hours, 34 minutes before the deadline
Add to collection 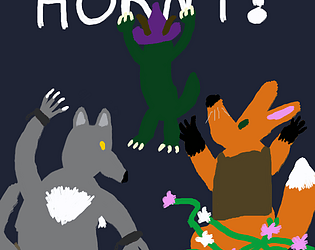 This was a fun play!

The setting was interesting, I liked the mix of classic fantasy and mundane slice of life details. The sexy scenes were well written, definitely super saucy stuff. Also I like that you get to TF. That was fun. I liked that you could choose for an encounter to be sexy or not through the SiezeTheHorny mechanic, I think that kind of player agency adds a lot to creating a comfortable sexy game.

I got a bit lost (I'm not great at text adventures) so I didn't see the whole thing, but I enjoyed the parts I was able to explore. Well done! =3

I'm really glad you enjoyed it! Thank you for playing the game!

I find it a little hard to focus on interactive fiction, so I only saw the room with the spellbook. The transformation is well-written, although it was more graphic than I expected, so maybe I should've heeded the warnings a little more closely.

Also I think there's a bug in the exits? The spellbook room says the north exit is blocked, but I was able to go north and I ended up in a room that didn't appear properly connected to the spellbook room.

Anyway, not to be too negative! This looks interesting from what little I saw, and I might come back to it later if I can muster a bit more focus next time. Maybe I'll draw my own map so I can keep track of where I am.

yeah I've had other people tell me the exits are kinda messed up. The rooms for the transformations originally have the north exit blocked until the player grabs the item and then the north exit opens up.  Which might help explain what you experienced. Do you think a basic floor map would help other players? I might include a basic layout of the dungeon as a screenshot to help people get around. And thank you very much for playing it!

That might be helpful! I don't think that part is your fault or anything, it seems like a general accessibility issue in IF. A map of some sort would definitely be helpful for folks who are better at navigating spaces visually.

I'll draw one up with the room names missing so you can at least get a general sense of where you're at. And i'll upload it as a screenshot for the game and then include the .png as a file in the download. The more I can cut down on confusion the better!

i really enjoyed this, especially the unexpected reactions to attempting to "take" certain npcs!

my only complaint is that there seem to be a few rooms listing their exits incorrectly - one lists south as a possible exit, but attempting to go that way doesn't work, and a couple other rooms have valid exits that don't appear in the room description

ah that might have been a result of stuff getting cut during the dev process. If you remember which rooms they were please let me know. And thanks for playing!

I got a little confused in places and Inform makes it complicated to know what can and can't be done at any given moment but I'm a fan of the mechanics I was able to understand! ❤

Submitted
introduction for a game
LikeReply
SmutWritingDragonDeveloper4 years ago(+1)

I'm glad you enjoyed the parts you could play! Thanks for giving it a try. Was thereanything in particular that confused you that I could improve explaining?

Well, I couldn't figure out how to make the keys work - I got the sense that I needed to collect all of them, and in some way use them to open the final door, but neither "unlock" nor "use" seemed to work, and they failed in ways which seemed like the standard Inform "this command isn't implemented on this thing" fashion, rather than a "this would work except you lack a prerequisite" way.

I also could never figure out the use of the "seizethehorny" custom command, which seemed to fail or succeed depending on the relevant stat, but never to do anything useful - sort of like when you say "xyzzy" at the wrong time in Adventure: it clearly does a thing when used in the right context, but outside that context it quietly does not a thing.

Now that I think about it, I start to feel like maybe the latter question answers the former...