Submitted by ingxstudio — 1 hour, 20 minutes before the deadline
Add to collection 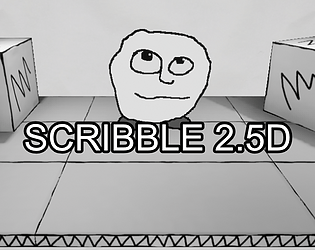 Nice idea! Reminded me of FEZ. It feels a bit a bit inconsistent though. Like sometimes I can walk in the 2D view even though it does not make any sense in the 3D view, so it felt more like trial and error.

Graphics and sounds were perfect! The conversation at the start was also funny :D

I really like the perspective switching idea! Limiting the player's time in 3D space works well to emphasize it being almost like a superpower in this flat world. I think the only issue I had with the gameplay was occasionally just walking off the side of a platform in 2D because it was hard to tell what was in line with the character, and what fell in front of or behind him. I do have a couple of ideas on that though:
1) if the 3D camera starts from the same world position that the 2D camera has, it could be easier to quickly switch to 3D without losing your bearings to pop the camera upwards to check platforms ahead of you, or

2) either with access to depth info + shaders or just a depth of field effect, it could be easier to tell if a platform you're about to walk on is waaaay off in the distance by making it somewhat out of focus

Very cool game, I enjoyed it! It would be great to be a little more guided, but I know it’s a jam and time to do that is missing x)

Fun idea, sadly could not get very far. Just a bit too intense for my pc, kept falling off due to lag spikes. Looking at the screenshots it looks super fun, really hope you work on optimizing this!

Hello, yes i used Unreal Engine for this game, and i know some computers dont like this engine ..

Maybe in the next update i will try to optimizime more !

but anyway, thank you for the reply ;)

Bro! the 2d to 3d its so well made and the audio and visual they combine so well it really bring me vibes of the old creepy pasta games

Those were some awesome mechanics, well done!

Nice one! I liked the music and visual effects.