Climb endlessly in this wacky, space-y game!
Submitted by Icoso (@icoso_games) — 4 hours, 4 minutes before the deadline
Add to collection 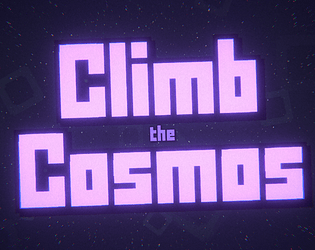 The aesthetics of this game are great; it's probably one of the best looking games I've played this jam. A lot of work clearly went into making the game look good and unique, the customisation is a nice touch and the sound is decent though it can get grating after a while.

That said, the gameplay needs a lot of work, especially the procedural generation. It's way too easy to end up in a situation where there's just nothing you can do, either because platforms spawn too far apart from each other, because there are too many enemies blocking your only route(s) or both. I like the chaotic feel of the game, but it feels like getting a good score is more luck than anything else. Sometimes I'd have a clear path up and other times I ended up with all the platforms too far away from each other to jump and enemies/obstacles taking up almost every pixel of its space. Bullets you fire should go through platforms because it just makes it frustrating to shoot enemies, especially when they're blocking your path up. You could also do a better job at explaining the game's mechanics. Instructions appear extremely slowly as the camera scrolls up and aren't specific enough. For quite a while I had no idea I could double jump lol. Finally, the player character is just way too floaty when jumping and it's too easy to get killed by enemies off the screen. Half the time I didn't even know what killed me.

That said, this is a great entry with some of the best aesthetics of the jam. Nice work! :)

Thank you so much for all your feedback! I'm happy that I can pinpoint some of the main things that need improvement, so thanks a lot! :D

I haven’t been able to play this yet because I’m without a PC currently, but I definitely plan on playing this when I can, it looks awesome!

Thank you! Yeah lol i'm not too great with builds haha

I love the overall atmosphere of this game, visuals and audio-wise. The chaotic particle effects, the really pretty customized UI, the way the screen shakes and how all the stuff is all over the screen, it's awesome.

That the platforming is a bit difficult to play, though. Since the platforms are always falling as you stand on them and your shots can't go through platforms, I often found myself being walled from going any higher due to not being able to shoot enemies or platforms falling too low.

That being said, I would love to see where this game goes and where you go as a creator from here. Great stuff!

Cool game! The graphics look great and I like the sound effects. The player customization is a nice extra! Good job!

Wow. There is a lot of effort behind this game!

Such a good gaaaaaame! I won’t write anything about the progression flow because my game personally does this job really bad XD, great job!

Thanks heaps! Haha, all good! :D

LikeReply
Shot out gamesSubmitted2 years ago(+2)

This game has everything and I am not sure that is a good thing. Everything is done well but too much to do at the beginning. Jut needs better progression and flow where it starts simple but exciting and then start adding all the cool mechanics as we get higher.  So much work for a 72 hr jam. Nice!

Thanks so much! Yeah, was running out of time to do any balancing and progression, but thanks for the feedback! :D

Really beautiful graphics and feel but I feel like there's too many particles and too much camera shake at times.

Thanks so much! :D I'll be sure to fix those things if I ever update the game, thank you for the feedback!

really good game, the score is smooth, the explosion mechanic is interesting, also the jumping is quite correct too, i like the color customization idea.

the game is really good, although, i will say that the platforms going behind the text makes it very difficult.

Thanks for all the suggestions and ideas! These are really helpful! :D

you're welcome, i would love to see a post-jam update!