Get the Data, Get out
Submitted by arawlings73 — 1 day, 1 hour before the deadline
Add to collection 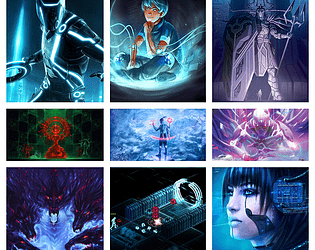 First, thanks for the game! As someone not familiar with the genre / setting a few quick definitions would be helpful at the start.

I think RUN is actually worth defining this way as seeing RUN and movement in the same line made me believe the to were related.

I'm a total sucker for hacking games, so really looking forward to giving this a play.  Almost seems like a competitive puzzle game mixed with robo rally.  Lots of neat potential here!

Submitted
OPR - Warbands of the Arcana
LikeReply
AdalilSubmitted1 year ago(+1)

how big is the map?  what's ICE? I guess it's a "minion", and you will need some kind of token or figurine to represent it? Do hackers know all the ICE protocols all the time?  do tiles start clear?

If so, a hacker doesn't need to know any programs, they can just spawn 8 Ice per turn until they have 20 ram covered (probably 20 archers) + infinite ravens.

Great ideas here but the writing is a little messy and needs proofreading. Just changing the order of some parts will ease the reading by a lot. I also advise arranging programs either alphabetically or thematically (dealing damage, defending, tile changing, bonus, malus etc)

Not OP, but ICE stands for Intrusion Countermeasure Electronics. It's originally from Neuromancer, but I'm guessing OP got the inspiration from Netrunner (which is the greatest game ever made).

Got to agree with all of your points. I feel like there could be some really interesting decisions, here, if the ICE wasn't just a free-for-all. It should also be noted that Ravens can't exist; they can take 0 damage, and so if they've taken 0 damage they're de-rezzed. I'm a fan of the programs, but I don't think they're all equally good, and I'd rather see a smaller list of programs and units with a greater range of utilities. I also want to see a cost, something to make me think about what I'm spawning. I think spawning 8 (or 4, if diagonally spawning isn't a thing) units a turn is a no-go, especially with 20 RAM being the limit. That's a lot of units, and it'll take a long time to resolve all of it.

I think making a Movement action compulsory, along with having a phase where they can summon without cost, trivializes the goal of the game and could be more interesting if there's more player agency as well as a cost/reward analysis that needed to be considered.

What happens when a Hacker is de-rezzed?

I really like the idea, though, and I'd like to see it flushed out a little better.  Big fan of the objective; anything that isn't "kill everybody else" is a big plus to me.

Yeah, I forgot about that. I'm so tired about the "kill everything" objective.