After five hours of drawing assets, I'm taking a break to put together a little dev log here on the community page. So, this is my very first time making a video game ever, and I gotta say I am pretty excited about it. 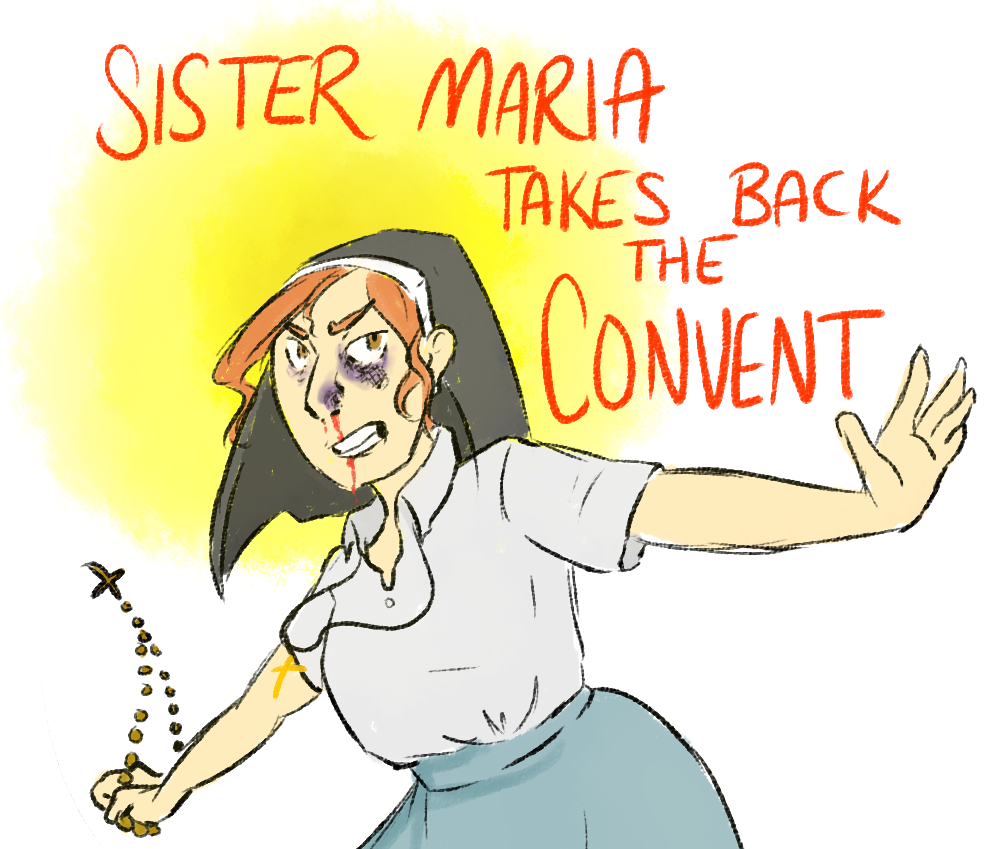 SISTER MARIA TAKES BACK THE CONVENT is a metroid-vania sidescrolling platformer where you play as Sister Maria, a nun at St Justa's Catholic Church. One day, she finds her convent overrun by demons, and is anointed by God to take her rosary and go kick some demon-butt! As well as banishing the evil back to Hell, she must also rescue her fellow nuns who are still inside holding their own. But her biggest task is to find Mother Superior, who is up in the chapel, and help her battle Satan!

As I said before, this is going to be a metroid-vania sidescrolling platformer type thing. I'm hoping I can figure out how to make power-ups and equitable weapons, because I'd love Sr. Maria to get a yard stick and a Bible as weapons as she travels through the convent.

I'm going to make this in Construct 2, and I have absolutely no idea what I'm doing. It'll be a shit-show, I'm sure.

I'm making EVERYTHING in Paint Tool Sai. I've chosen to draw the entire map as one single image, and I'll place invisible platforms over the image in Construct 2. At least, I'm hoping that's a thing that will work... [fingers crossed]

[What the art looks like. Maria's sprite is just a placeholder for now.]

If you wanna see progress pictures, all of that is getting dumped on my game dev tumblr Grenadine Games

ohhh my god your first graphic is hilarious and perfect and sells me on EVERYTHING instantly about your game. i honestly can't wait to see this in action it looks so fun!!!

Gaaaah thank you so muuuch! I'm really hoping it turns out how I'd like, but now I'm getting nervous abut the event limit in the Construct 2 free edition....

2 AM on day whatever this is and ALL THE BACKGROUND ART IS DONE. Holy crap the image is huge but I'm super happy with how it turned out. I plugged the giant thing into Construct 2, started adding solids and now I have something that looks like a game!!!!!

All I have to do now are the sprites of EVERYTHING ELSE. ...And program fighting, and make more sprites for Maria (you may have noticed she doesn't actually jump), and figure out how to get her up the stairs....

nice!!!! this looks legit + it looks like you're progressing well!!!

OH MY GOSH THESE ANIMATIONS ARE SO CHARMING!!! your art is so cohesive and the animations flow so smoothly!! i can't stop smiling every time i see this game aaaa

i must watch her destroy

Dear Lord everybody is so nice ahhhhhh <3<3<3

Tiny Update! Yesterday was a lull day in which nothing really got done, but already today I have made tiny but exciting strides!

SO code is super annoying! I've been having lots of issues the last day or two with code, particularly with attacking. But, as a way to get my mind off of this dumb code, I did some art!

Look at all these lovely bouncy demons! I can't wait until they are able to beat Maria's shit in.

So, I've been bad. I went about 4 days without making any progress because I went way too ham the first few days and burnt myself out. Today I finally got myself to look at Construct again, and worked on some sprites. Lots of minor things, but I need to ease myself back in. The long break is making it clear that I don't think the game will be 'done' by Saturday, at least not how I want it to be done. Like, I haven't even figured out how to do dialogue, which is a thing the game will need.

And I'm pretty bummed. And disappointed in myself. I have a habit of doing this - diving headfirst into something and then very quickly fizzling. I wanted this to be the thing that helped me, ya know, stick to things, and I couldn't even stay focused for a week and a half. But I'm going to do my best. I still have a few days to get this thing a little more complete.

Also, I know people like pretty pictures, so here's proof I've made progress: I made Satan's idle animations, finally! Will need a little frame rate tweaking, but I'm pretty happy with it. He's very fab.

Don't worry about it! My game isn't going to be a complete release. I'm going to make it to the point that its playable and I can submit it as an entry, but after that I have no deadline and I can calmly polish up my game afterwards.

omg this is the cutest idea!!! i love the sprites and movements are great!!!

My game has been submitted! Huzzah! I'm considering it a pre-alpha build, a proof of concept if nothing else. It has it's little bugs and some spaghetti code, but it starts and plays and ends, which is more than what I thought it would do! I got a lot more done in the last two days than I thought I would, and today I finally got to a point where I was happy with my product enough to submit it.

I learned a lot the past two weeks, which I'm proud of. I was impressed by how much I started to understand how the coding/event logic works in Construct? Like? I had some major moments of 'Oh shit, I actually know exactly what's going wrong!' after days of needing to consult someone or something at every hiccup. I was able to take a lot of tutorials and mash them together to make more streamlined versions to fit my needs, and I was able to spaghetti together some nice fixes to obnoxious problems.

Another thing I have learned is that... video game programming may not be for me! Or, at least, programming the way I approached it. I jumped in way too deep without my floaties and ended up sinking like a rock after, like, 5 days. I had to step away from it all for almost a third of the jam just to recharge - and that's not good. If I ever do one of these again, I'll know to pace myself instead of spending 8+ hours a day in Construct for many days in a row.

However, I found that I LOVED doing the art! I have always been an art person, but Level Design was an interesting challenge, as well as coming up with a uniform visual vocabulary. Finally, all my design classes became useful!

Thanks to everyone in the community for all the love and support, as well as help when I had silly issues. I'm so proud of the work everybody had made these last two weeks, and I hope you all take a nice long nap on Sunday (I know I will!).

Lots of love from me and Maria