Hello everyone, my name is DragonChemist, and I am participating in this jam since it's my first game jam ever!

My game is going to be a 2D platformer using Unity and drawn as pixel art. The object of the game is to get to the end of each level as fast as possible without freezing your legs off. Along the way, there will be heat sources (lanterns, campfires, etc.) to warm up at and increase your heat. However, the further you delve into the icy caverns, enemies called the Frostbiters will try to attack and chill out with you, and one wrong slip can lead to your unfortunate demise. 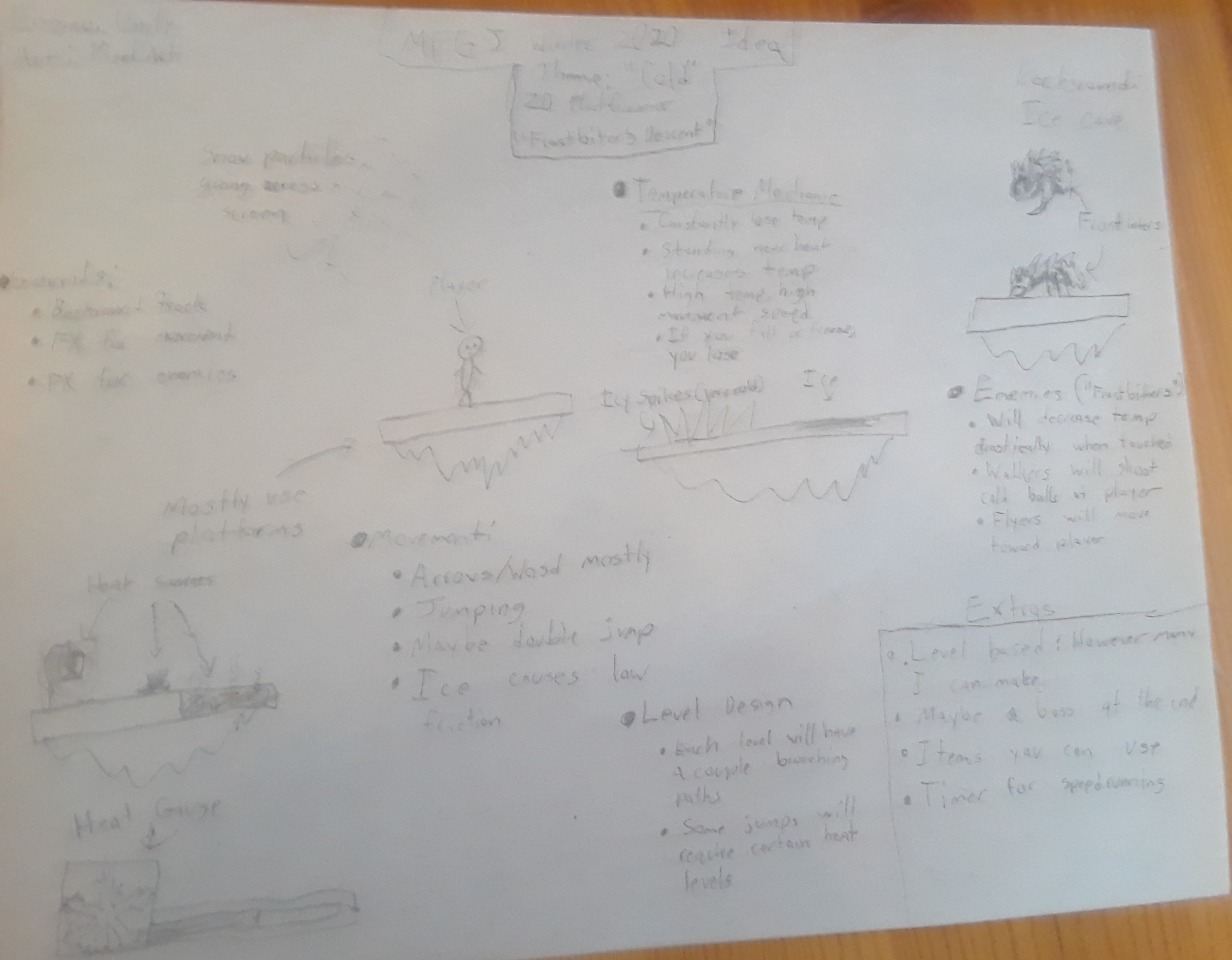 I want to get started working on basic character movement and drawing up test sprites, and then I might start working on the temperature system.  Any feedback will be greatly appreciated!

After a long day of doing nothing and trying to do things I should have done before the start of the jam (aka trying to find good software I could use for art), I finally have a working character that can run and jump (even if he doesn't look too good):

Does anyone have any ideas on how I could have a smoother movement system so the player slides along the ground a little? Thanks.

Tomorrow I will work on the heat system and get some lanterns with AOE heating, as well as make some rudimentary animations for the main character.

Alright that's enough from me tonight, expect to have a much larger and more engaging devlog from me tomorrow! (oh jeez its midnight already, that was fast)

I think that if you try to do the player movement with a Rigitbody2D  using ForceMode.Force  you’ll get that smoother movements.

Okay thanks, that helped make it feel less robotic!

hey this is solid progress so far! if you're finding you're getting stuck on something or want to ask someone for advice, feel free to join the discord and pop your question in there! best of luck!

Hey everyone, it's me again! Today I got a lot more done, and the game is semi-playable now! I made it so that the player slides across the ground, as well as cap their movement speed, so they wouldn't go too fast. I added a heat gauge, with a snowflake icon at the end that I might even use for the final build:

Then I created the temperature system, which took longer than expected, since I had to tweak the movement speed and jump height of the player a lot. Basically the colder the temperature, the slower and less high a player can move/jump. I then built a small level for testing different jump heights at different temperatures, and still had to tweak movement values (>_>). Finally, I added Lanterns to heat the player up if they stand near them, and made a temporary sprite for them too. This is a basic overview of what I've done so far:

So far, I've actually done more than I thought I would get done at this point, so I guess this week I'll work on creating the Frostbiters (enemies), their behavior and projectiles. Since my pixel art skills are less than sub-par, I might consider drafting a friend to help me with it, as I already have a lot on my plate for this project. I don't think I'll work on animations this week, because I want to get something playable before I add any polish.

I'll end this devlog off now, as I have school tomorrow, and it's a new semester. I'll try to get another devlog out soon, but they might not be everyday, depending on how much I can get done. Anyways, have a great week and good luck everyone!

the only really important thing i can think of that you might want to add is moving animations. even some random filler movements would be fine, just something to show player movement.

good luck on your project!

I always think that sketchy programmer art is charming, especially in Jam games. If you want a more polished look, though, have you looked around on Itch or Open Game Art for art assets? There are some good snowy and cave themed side-scroller assets, and you might find a character and enemies with animations that you like, too.

oh it's really interesting that the temperature affects the platforming speed/jump!

Sorry for no devlog yesterday, but I'm kinda busy with new classes. Anyway, today I didn't do too much new features, but I made the movement more snappy, and temperature harder to manage. I added ice spikes that rapidly deplete your temperature, but can be escaped from. Right now it looks like blue fire, but it'll be fine eventually. Also sorry for no images/gifs today, but hopefully my next devlog will be Thursday, and I'll have basic enemy designs by then. My plans are still the same for this week, so I'll try to get a lot more done thursday/friday, so see you then!

it's pretty normal to be busy with life things so don't worry about it! also that sounds like solid progress! i can't wait to see it.

Today I worked on making the enemies, but I'm not done with them and there isn't anything to show yet. BUT I have a friend doing the art for me soon, and this weekend I'll get a lot more done! (I hope). I also fixed a couple bugs with movement, and started to set up animations for the player.  Anyway, sorry for the short devlog, but I hope to get another one out tomorrow!

Don't worry if you can't post a devlog each day, everybody has things to do.

I love the freeze mechanic! You might could think about some benefits for the player at low heat. Maybe he can't jump as high, but he can slide along faster. That way, the player can decide on some trade-offs.

That's a really cool idea! I might try to incorporate something like that into my game after I've finished the main mechanics ;)

Today I got my friend @ButterTheTurtle to help me with the art, and so the game should look a lot better! I added them to the project and (besides the player) they look great! 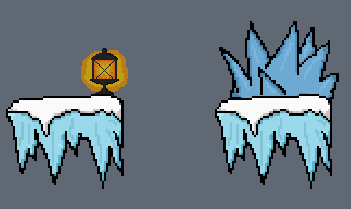 On the programming side of things, I'm currently working on the Frostbiters, with some test sprites  and so far I've got their basic mechanics in place. Eventually I'll have to figure out how to do A.I. movements, but we'll get there when we get there.  I've decided that I'm not changing the player movement until I've got enough of a game to experiment with something like that, but for now, it will do just fine.

Sorry for the long wait, but I am happy to announce that over these past few days,  I have worked as hard as I could to get the game to a playable state! I've implemented the flier enemy, who dashes toward you through the air, which was drawn by @ButterTheTurtle:

Also I've created the main menu of the game, some of the background is still a work in progress, but so far does it's purpose:

I've also created the main theme of the game, which I just whipped up today. It's supposed to make you feel scared, or worried, as you head into the deep dark cave. I'm not quite sure if my song has that feeling, but it works for now (you'll be able to listen to it when it comes out).

Overall, despite conflicts and a busy middle weekend, I'm proud of what I've done for this jam so far. However, as time runs out on me, I'll probably cut back some of the game's content, as I don't think I can do effects and multiple levels in 2 days. However, I will try and finish the animations (If ButterTheTurtle can finish them in time) and maybe make the shooter enemies(?). So far, it's been fun, and I hope I can put out a decent attempt at a game before the deadline!

I'll try my best! Good work on everything! #DragonChemistWin

1 more day to go until the submission deadline, and I barely have any game to ship. Due to a heavy snowstorm in my area, I lost power and internet for most of the day today, and when I got back on to working, I found out that my main level scene had corrupted, and my whole level was deleted. However, I was able to get everything back together, and get to the state I was in before in about an hour. The only thing I really have to say about progress today is that I finished the player's animations, and am preparing for a submission tomorrow. Sadly, I will not be able to work on it for most of tomorrow, so the game will most likely be a demo, with a few enemies, but no endpoint or variety. Good luck to everyone else on submitting!

This is it. It was great working on this project while I could, and the jam really motivated me to do it as well. I didn't add much, but I submitted my project and am exited to play yours! I'll probably make one final devlog talking about how much I learned doing this jam with you all, but for now, here's the link: https://itch.io/jam/my-first-game-jam-winter-2020/rate/565408