The Art of ExplosionsView game page

An explosive experience
Submitted by Reeds (@jjredux)
Add to collection 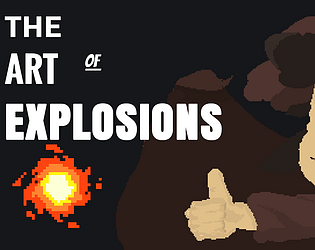 The Art of Explosions's itch.io page

This is my favorite in the jam, excellent work all around! I especially liked the characters and the fight at the end.

Hey Firelord Bob, I appreciate the comment! Thanks for playing!

Really liked this game. The dialogue at the end had me confused as I was expecting another boss, especially since you mentioned "first boss" in the description so I played through again hoping I unlocked some "new game+" boss or something.

Other than that it was very good. Loved the use of checkpoints, would have been infuriating without it. I had no problem with the narrow section myself so I didn't have to do it over and over.

Whoops, that's a grammatical error on my part.. I meant it as the first cut-scene concerning the boss, not the cut-scene of the first boss. Thank you for playing, and I'm glad you enjoyed!

I really liked this one! The characters are really nice looking. I dig the animations, there are even some special animations for the boss, which is very cool.

The boss battle was thrilling, as I felt close to dying but managed to make it in one try.

The part when you have to make two very precise jumps felt a bit too hard, because many times the character kept sliding after successful landing and proceeding  right into the pit, haha. When I completed that part, I had to balance between the rotating spikes while going up, and the last jump always felt a bit impossible, especially when I had to go through all the narrow columns again. I'd place a save point between those two parts, or maybe there was one, but I missed it?

But honestly, that's the only issue with the game that I have, as I really liked everything else, including the idea, the character design and gameplay. Good job!

Wow thanks for all the feedback! Funny that you mention the lack of a checkpoint between the 1block jumps and the vertical section... an earlier build actually had a checkpoint there. I'm glad you liked the boss battle, I had a lot of fun making it. Thanks for playing!

Thanks so much riemann, I'm glad you enjoyed!