A peaceful Metroidvania about finding and collecting gems.
Submitted by Azecy — 11 minutes, 6 seconds before the deadline
Add to collection 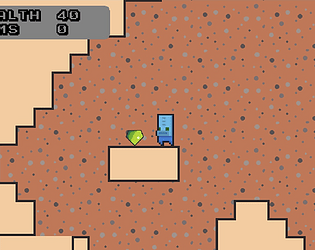 Comments on the jam
Thanks for hosting the jam!

This game was very simple, but I could see the game you were influenced by leaking in. As a game that can be fully completed in an hour, I was really happy to see platforming challenges created with the powers in mind. The scope of this game was very small, but I think that means you've learned about not burying yourself in work to keep up with your ambitions.

With that said, for future games, I'd love to see you increase the ambition! What kind of crazy 2d movement mechanics could you think up, and what kind of platforming challenges would a player like me have to contend with? Sometimes a jam is about experimentation, and playing this, I think you have a good grasp of game dev fundamentals to push past your own boundaries.

Thanks a lot for playing & for leaving such nice feedback! I totally agree with what you're saying. I am considering a long-term project without a deadline for my next project. I could have managed my time better this past month, but it is hard to do very much more in such a short time, especially using programming libraries instead of an engine. There are quite a few things I would have liked to add to make it feel like a completed project and not just a demo - sound effects, animation, menus, a mini-map, etc. I'm glad to get your advice, & I will be looking forward to something longer for my next game!

By the way, I added a few upgrades to Gemful Caverns already, including sound effects, & will release an update as soon as possible!

I had a lot of fun with this one! Good controls, good progression of upgrades. I love the hidden places that you put in to get the extra gems and try to get all 50! I will probably play again after I play all submissions to try to get all 50 of them. And thank you so much for making gamepad controls, and also making it where you can use the left stick instead of just the dpad to move! This is the first submission I have played where I could do that!

Feedback: Jump and dash especially feels a little robotic. Are you supposed to be able to dash in the air multiple times without touching the ground again? The only real bug I found is that sometimes I would land on a spike and not get damaged. If you really need me to I can try to do it again or find where I did it at. Otherwise, everything seemed to work just as designed!

Hey, thanks for all the feedback! Someone requested analog controls in a past jam where I was also using raylib & it turned out to be pretty easy to implement, and I was able to make a reusable control scheme. I know how it is from the other side - I hate using analog stick instead of dpad - so it's only fair that I should make both options available.

For the dash, I was basically emulating some of my favorite metroidvanias - Hollow Knight, Environmental Station Alpha, and the Assault Crisis series (Japanese indie games) all have a similar dash. There's some other cool things I want to do with dash that I didn't have time to implement in a game jam, like walls that can only be broken by dashing into them, damaging enemies with dash, etc. I'll keep it in mind that the dash felt robotic. Also, I noticed that you can dash in the air multiple times & at first I thought about trying to fix it, but decided it wasn't really a problem in this particular game. In the future I will probably limit it to 1 dash before landing though.

As for the spikes, I think the problem probably comes from not having visual or sound effects when taking damage. Your health resets to 40 whenever you enter a door, so maybe you were thinking of damage taken in a previous room. Also, there is about 1 second of invincibility frames, but there is no visual or audio effect for it yet. Sorry about that being underdeveloped, I would like to add that in an update after the jam is done. If you end up running acros it again, definitely let me know, I'll try to fix it. I'll check it out on my own too.

Congratulations on the publication! I finished the game with 39 gems. The atmosphere is nice, it lacks a bit of feedback but the feel of the moves is nice. A calm and relaxing game, really not stressful.

Thank you! Sorry it is so unfinished. I wish I had added sound effects, & some visual effects for taking damage and collecting items, but didn't get around to it before the deadline.

get an error message that says program cant start because libwinpthread-1.dll is missing

I'm sorry I let that bug slip through, I'll try to fix it right away. Thanks a lot for letting me know.

I think it's fixed now. Let me know if it still doesn't work for you.

got 49 gems but no idea where the last one was.  maybe an indicator for whether there are any left on a room couldve narrowed it down,

liked the hidden areas, it gives a moment of anticipation

felt the game had the 'peaceful metroidvania' vibe.  the music contributed a lot to that, its a really meditative track. it did feel a bit like a few seperate rooms you play in rather than a connected map

graphics were really functional, can tell exactly whats what

Thanks! There is a gem in the first room that you need air dash to get & is very hard to find, I wouldn't be surprised if that was the last one. I like the idea of having a gem counter for each room, that would make things much easier.

I'll have to look into making the map feel more connected. It gives a nice feeling in MVs to have a connected open world, but the doors are much easier to program. That would be a good project after adding that the basic stuff that is missing like sound effects.

I'm glad that the graphics were acceptable. I did everything except the hero sprite by myself for the first time & didn't expect it to look very good. I feel like it could be a lot better, especially the dash upgrade sprite.

Thanks a lot for playing & for your feedback!