Help an Old King learn some new tricks while also reliving his past glory days as a young and ambitious adventurer.
Submitted by jmbjr, Greynaab, JerBearStare, boyleberger, sophiadoodles — 1 hour, 4 minutes before the deadline
Add to collection 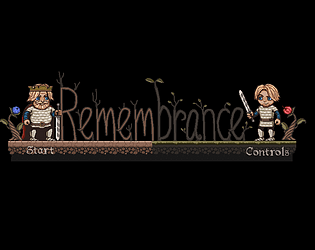 Really great game! Feel like it had a lot of thought put into the lore/story.
Another thing that roped me in was the art, even though the tiles were repeated which caused a couple of backtracking problems, I really liked the little touches (e.g. The little movement in the hair of the characters when they cast stuff, the way stuff get lit up by fire/ get filled with water, love little things like that).
Really liked the upgrades too, especially the solar dash, but I stopped using it after awhile because I realized that I usually get hit right after I finish the invulnerability frames., would have been nice to have just half a second more of invulnerability to move out of the way.
Have to admit that the character controls were a bit clunky though, as the "slipperiness" was a bit hard to control, have to agree with SavestateCorrupted with switching with a set speed too.
Crazy amount of assets/ work done in one month though, so spectacular job by the team! Thanks for making this and will hope to get to play the ending some day!

Thanks for trying our game! And I am glad you like the little touches with the animations, I sometimes go overboard and get looks from my other half who has to implement them. lol

yeah I feel bad about the backtracking that everyone is having issues with.  Besides the rooms looking a little too similar, we didn't make it obvious enough that you can move the Oldman from the beginning room to the courtyard after his younger self unlocks the door in the past.  Which I think would have reduce the backtracking a bit.

As usual, I won't comment on the movement. But it's obviously something a lot of the players feel can be tweaked, so I'm sure the team would look to improve it if we do further work on this project!

Thanks for playing!  Yea, we spent WAY too much time on the lore and what made it into v1.0 was barely scratching the surface.  We had to narrow our scope quite a bit so I'm really happy that you could sense the bigger story that we weren't able to delve into much.

A common feedback was that it was easy to get lost. I thought that the various zones were distinct enough but it's clear that I think we need more landmarks and, as you said, tile variety to ensure folks don't get too lost.  We also are considering adding a mini-map which I think could help as well.

The solar dash is a controversial power-up since most people have said it's OP due to not having enough downsides, so your comment about it feeling too risky to use is very interesting.  We originally had an MP system planned but scrapped it due to time and just played around with the casting delay to try to make it useful in countering Flyer dashes and the Boss dash/bolts, but we didn't spend any time on the post-dash, so thanks for that comment.

Agree on the controls. We did spend a lot of time dialing things in  but many people had the same comment to reduce slipperiness and make the jump not momentum dependent (seemed like a fun idea at the time! :)).

Thanks again for playing!

Awesome job! I really liked the past/present facet of the game. I liked how the Fiery Passion of youth was literally demonstrated in his magic, and as he aged, the magic became much calmer like water. That stuck out to me. The upgrades were cool, I didn't expect the old man to get any! So that was neat.

It played a little sluggish, and the momentum-based movement may have been better switched with a set speed instead. (getAxisRaw instead of getAxis, for example) I did get lost for a bit, and due to the movement issues, it was a bgit of a slog to get un-lost. Maybe more distinct areas/minimap would have been great (time constraints limit these polish-decision, I understand!)

Boss battle music! I'm glad you had a boss. It was easy to run and spam fireballs, almost incentivising you not to use the sword at all the whole game (with the old man even saying how heavy it was) but the intense boss battle music was a nice change. The other songs were a little grating after getting lost, but not too bad. Again, time constraints limit these things. I would have loved more music. Still you had 3 songs which rocks.

Awesome work in a month. Seriously.

Thank you for your comments! I think we spent a little too long working on the concept/story than we did on actually making the game, but  I'm glad you picked up on it.  Originally the team wanted to make both old and young player to have equal portion of gameplay. With the time constraint, they were only able to focus more on the young player.  But I am glad you were able to discover the upgrades for the Oldman, I know that part wasn't super obvious!

We also weren't sure if we would have boss music, but Jason totally came though with it last minute. :) About that one song getting a little repetitive. Maybe we can beg him for a longer version or maybe just another variation of the theme for the non-combat area. That's definitely not something that was super obvious to the team as they are so use to beating the game quick.

I'll let other team member comment on your feedback on the movement . :) Mini-map is a great idea and I think very likely something that would be implement if we work on this game more.

Thanks for the feedback on the music.   I had plans for longer and less repetitive music,.

Definitely something i wanted to spend more time on, but it got put on the back burner while trying to get enough SFX for the game to have some proper personality.

If we decide to keep going with this game we will definitely tighten up the controls, especially the jumping and overall speed. Sounds like a lot of people got lost so we'll have to deal with that too. We considered a minimap for the jam but cut it due to time. We also plan on trying to add better landmarks to make make it easier to know roughly where you are.

Great job on this, everyone. First of all, the lore. I really liked the story where you are going back and forth between time period in this knight's (king's?) life. You did well using the way the characters controlled to express their differences in age.

I also liked how each time you got an upgrade, the character demonstrated in what situations you would use it. It made it super clear what each upgrade was for and even may have made you recall what area to go back to.

However, it was very tough to control. The jumping felt unnatural and all of the actions felt very slow. Maybe this was intentional in a classic Castlevania type of way, but it made exploring and backtracking tedious.

It was also easy to get lost. A lot of the interior areas looked similar, so it was difficult to get a mental map of the world until I had gone through it several times.

Overall, I think the team did a great job. It has a solid story, great art, and the final boss was really cool.

Thank you so much for your feedback! I agree with you every room looks really similar currently. Probably because they were all build from one set of tiles that were meant for one room. lol. I meant to provide our level designer with more background tiles but got stuck trying to finishing off just the enemies and boss sprites.  :(

I'll let other team member comment on their portion of the game. :)

Thanks for playing! We definitely weren't trying to go for a classic Castlevania feel and were shooting for a more modern and easier-to-control playstyle, but we've got a lot of feedback that we didn't quite pull that off. So if we actually keep working on this game that's where we'll put a lot of focus into that.  Thanks for the feedback!