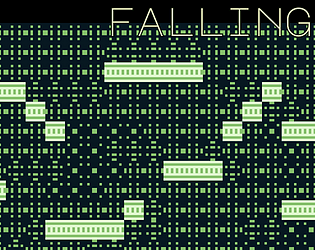 Did you work in a team?
vian - solo dev, artist, etc
i hate pixel art math but laying out a 2d map is always fun

Was the resolution a challenge?
i learned about tiles having their own pixel size. since i was working within game boy computing constrants i didn't worry too much about the art and figuring that out

What did you learn?
ive never used GB studio and id love to revisit it with a point and click concept thats more narrative and art focused

very interesting concept. Can you do anything besides falling down? some music would be nice to set the mood for the poem. Some animations would be even nicer. Also the physics felt alittle bit floaty, i dont know if its on purpose, because i couldnt figure out what the player sprite represents. Keep up working on it, i see some potential in it

Lacks some polish, but the premise is nice.

Interesting idea and I enjoyed the sentiment of the poem. Congrats!

I see where you're going with this and it has potential, but I my opinion you could have taken this concept a lot further. Let me explain:

When I saw the words "poem platformer" and your concept sketch, I had in mind a kind of pseudo-rhythm game where words from the poem would be triggered by the player falling on platforms. So that way you get a kind of modular poem that the player could explore at their own pace. Maybe if the player falls on the platforms "out of order" they would get a scrambled verse, and they would have to fall again in a different way to get the "correct order". That would make for a great way for the player to explore the poem through different perspectives. Also some voice recordings for the poem would've really packed an extra punch in a concept such as this.

But as it is, it seems that you've set some hardcoded triggers after the player reached a certain height, which made the game feel more static than it should be. Also after the poem's recital ends, then the game just becomes endless falling with no meaningful actions to take.

I liked the concept, quite different from what I was expecting. But, I believe that having some puzzles to solve would improve the experience.

I don't like poetry and I think that poetry games are a weird idea. But that's not your fault, that's only a matter of taste. However, one thing IS your fault: the game is too short. I'd surely appreciate if your game was longer than 2 minutes. Create a longer game next time.

Nice poem? game? Just I don't really know if it is a platformer since there's no jumping.
Also, you should double-check if the resolution really is 64x64 or less.