bomberman clone with a different setting made for Löve jam 2020
Submitted by Felipe Viana (@FelipevFlash), apalomart — 13 minutes, 56 seconds before the deadline
Add to collection 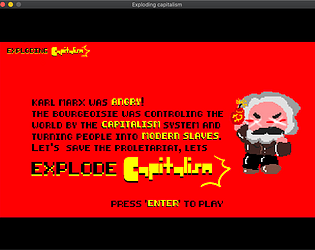 Good start. I included it in my Love Jam compilation video series, if you’d like to take a look. :)

Nice Bomberman clone! You already have most of the mechanics in place, your enemies are lacking collisions and they run out of the world though haha.

Very well done, the graphics are really good, specially Karl and the menues.

It’s lacking sound and that’s too bad cause this would be even funier if you had some haha.

I really liked the humor and the theme the game has haha, hope to see a more finished version later on. Thanks for participating in the Jam!

your enemies are lacking collisions and they run out of the world though haha.

Yeah i'm gonna try to improve the physics since the way i did is very specific for this first stage scenario. In my tests they were sticking to their routes but i can see how that could happen hehe. I was learning Löve during the jam so that's all i could do in a very quick and dirty way.

Very well done, the graphics are really good, specially Karl and the menues.

Many thanks, that's my gf's art i'll show your comment to her.

I really liked the humor and the theme the game has haha, hope to see a more finished version later on.

Thanks for the kind words. I do plan on improving the game yes. I'm a little rusty on game dev but i'm starting to love Löve so i'll try to keep using it. Maybe Monogame could be a bit of a easier starting route for me since i did mostly XNA before but i'm liking lua and the Löve community.

If you have any tips for someone who has a programming background and is starting with Löve now i'd be very thankful. Right now i'm focusing mostly on how to organize the code for a little bigger project since i plan on adding more enemies and stages, i think open source codes would be fantastic for this. Next i'm looking on how to do menus and game state management.

Tell your girlfriend she is really good! And should keep doing pixelart.

I’m amazed at what you made even though you are just starting with LÖVE.

I think the best way to learn your way around LÖVE is to try all the different APIs and things it has to offer. And also knowing Lua entirely (LuaJIT more specifically), even things like performance and optimizations. Just be sure to work up slowly cause there is a lot to learn.

The rest you’ll figure out just from working with it. But if you really need to, there are tutorials here and you can always come to the Discord server or the forums to ask questions

If you can, you should also try to learn common Game Programming Patterns, you may already know some of these though.

Yup, it's a bomberman clone! I think adding some music and sfx might have made this game better. Good job!

Haha. Plus points for the theme. The gameplay is pretty simple and there's no progression, but what's there works pretty well. :P

Thanks for the detailed comment. The project ended up too ambicious for the time i had but i plan on updating the game to make it finished.

The menu screens aren't properly scaled on my screen, this is how I see them, which is probably not what you intended. If your game is going to support fullscreen remember to also scale things to us people with small screens :P