Plan your turns from the shadows, everyone moves at once!
Submitted by nrichman — 1 hour, 42 minutes before the deadline
Add to collection 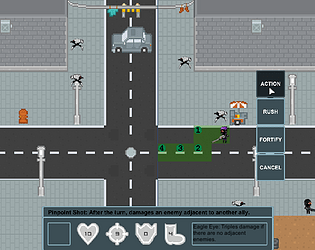 This game doesn't really reflect the screenshots shown, as far as I got into it, but then I stopped pretty short due to a bug and the annoyance that playing presented. The gameplay is non-typical to normal strategy/tactics games and thus, because there's no explanation on how to play, it was difficult to figure out. Only accidentally dragging the mouse helped me realise how to move.

But that wasn't the only issue - there's no turns. Meaning that you move at the same time as the enemy and you can move towards where you think they'll be but they can easily just move somewhere else at the same time as you move to them and thus miss them completely. I had to double-back on my path a few times in the hopes of running into an enemy to attack. Which is dumb.

On top of that, your characters cannot occupy the same square at any point or the game will freeze. Oh, and those you'd think would be long range (like the sniper) seem to require melee range in order to do anything. And movement is pretty slow.

Oh, and the first map is bland, empty and boring to look at. You aren't told anything about how to play - just given a group of characters to pick from and dumped in the scene. And that's all. Frankly, the game is a mess and the idea of movement at the same time should be looked at so that it can be better implemented, if not outright changed to standard turn-based tactic battles. There's a reason people stuck to that type of strategy battle - because it works.

Thanks for playing and taking the time to review! :)

Tried to hack around that same space bug on the night of the due date - didn't work out haha. I would've loved to have some form of tutorial within the game itself, but I had to settle for instructions on the game page.

Not knowing the enemy movements definitely turned out to be way more frustrating than it's worth. Some games like Into the Breach have similar mechanics, but by telegraphing enemy movements they're actually giving the player something to react to. Maybe I should've replaced the enemies with headless chickens - would have been a better representation of how they act!

I'm confused as to what the point of the classes is. They all seem to need to fight in melee, even despite one being called "sniper".

At the end of a turn cycle the sniper deals damage to a random enemy that's adjacent to an ally. The damage isn't lethal, and I never got around to adding an animation to it. So it certainly doesn't provide a great user experience as is.

While the base combat all occurs in melee, the sniper does more damage with its action when there aren't any adjacent enemies - giving it some incentive to stay out of the fray!

Tons of fun! I really liked the story.