A 3D Tower Defense Game
Submitted by KiwiGalaxyDev — 4 days, 16 hours before the deadline
Add to collection 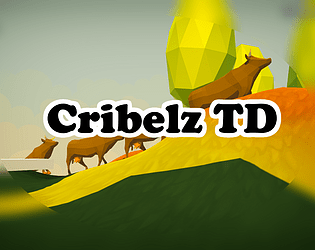 A little too easy and feels slow, not much of challenge.

Thank you for making a video about it. I know that it's not very challenging but I want to show you all my idea, a 3D Open World Tower Defense. Thank you for playing!

Rating the games using the Judge's categories just for fun

Interesting take on a tower defense game. Felt intuitive once I figured out the controls. I know they are in the game page, but some explaining of them would have been nice. The turrets felt a little unbalanced. The rapid fire turret was pretty much better than the other two in almost all situations. Same thing with the enemies. All of them were relatively easy, then you throw the giant spider for a spike in difficulty (I had anti spider upgrades by that point and it didn't feel like it did much)

Also, perhaps a button to speed up the action is needed. Sometimes I just get stuck watching as a cow or two reach my base since I don't have money to place another turret or I am just too slow to get there

While the game still lacks variety of turrets and enemies, this is something I haven't seen done in 3D before, although it still plays like a classic 2D TD game at the moment

Nice, clean graphics. Enemies looked fine. Music and sound effects complemented the action. I think some sort of sound cue or visual effect is needed for when an enemy hits the base. Perhaps this can only be heard when you are near the base and I missed it (Although it should be heard globally regardless).

I almost quit after having to restart the game multiple times because I realized my initial turret configuration sucked. After I finally got through a first few waves properly, I could keep going just fine/ I think you need to give the player the option to have checkpoints between a certain number of waves, perhaps as difficulty levels: the higher the difficulty, the less checkpoints there are, because the game is pretty long as it is, and losing on a later wave just drives away any motivation to play again for most people

Even with all this, I think the basic TD mechanics of upgrading the turrets and seeing them do more damage/be faster is a good hook

This idea is pretty original. As it stands right now, it requires a lot more polish and better use of the fact that it is a TD game in a 3D space with more inventive turrets and enemy types, as well as balance configurations and perhaps something for the player character to do by themselves

Wow! Thank you for your amazing comment! I really like your ideas to make the game better. So if you want to see more about the progress and more games I'm working on, please check out my Instagram: @KiwiGalaxyDev. Thanks! :)

Got a good core tower defense coded. Too easy as it is now, but once you add more towers & enemies, this could go places. If you can come up with a gimmick to make this stand out from other TD games, that would be good too. Good job!