Restore town and save residents by making furniture! #igmc2017​
Submitted by fizzlymike — 9 hours, 57 minutes before the deadline
Add to collection 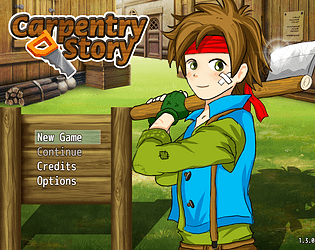 The up-to-date link you posted isn't working anymore. And well I tried the download that is available in the game page but I got stuck in the beginning. After going to bed and waking up, if you enter the old lady house again, you go back to the introduction (the part where she tells the story) and then probably because I was going around the village looking around, suddenly it was midnight and I got stuck in an empty house. Can't even move from the front door. Very weird.
Other stuff I'll mention so you can look it over: Right at the beginning the train is a bit glitched when it's going away, I can't really explain it, but it was like a black edge around the left part of it. It's nothing big but it should be easy enough to fix I think.
When I was looking around the village and inside the other houses (before getting stuck), I noticed that some had a bunch of bugged places, like I couldn't walk to one window or to the inside doors even tho the path to it was clear, no holes or anything, just empty floor. At least two houses had this problem.
There was some grammar issues and words missing in the dialogue too sometimes, starting in the lady's speech right in the beginning when she was saying something about her granddaughter going away.

All these are little things that made me just quit the game even tho the premise of the game seems sooo good. I'm honestly a bit disappointed. I liked the idea of being able to repair all the houses of the village. It sounded like fun. The workshop for making the furniture looked really cool too. I was excited to play this! >_< But anyway... I hope you'll release a more stable version of the game when you can and that after the contest you'll keep working on it too. Because this could be a really good game! Keep it up!

Thank you so much for your constructive comment. I've already updated for more stable (playable - -;) version with lot of features and bug fixes. Please visit topic at RPG Maker forum:  https://forums.rpgmakerweb.com/index.php?threads/igmc-2017-carpentry-story.86994...

I would be very grateful If you leave comment after trying stable 1.3 version. Thanks!

I liked the concept and story. Crafting was fun even if it was a bit of a grind. But one thing did happen to me; I repaired my room before the instance where it says "I should redecorate when I finish repairing" so that just loops every time I enter my room. I had something like 8 old beds and tables last time I entered build mode haha!

Thanks for playing. I think you just found another bug... I'll fix it right away.

Game needs to be updated to be fully playable! Please go there: https://forums.rpgmakerweb.com/index.php?threads/igmc-2017-carpentry-story.86994...

Cute game! Was excited to see that you posted this fix (couldn't sleep in the version submitted to contest), but now I cannot leave the house because "I should go to bed." Let me know when you sort it out? I'm curious to see what happens when I entirely fix one of the houses.

Fixed! Try to re-download please. Thank you for your feedback!