A story about one boy who ended up in unfamiliar place.
Submitted by rechronicle (@rechroniclegame) — 2 days, 13 hours before the deadline
Add to collection 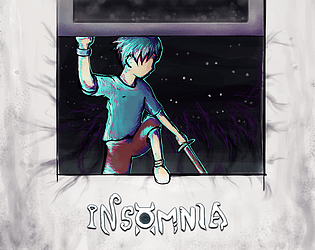 Graphics are all custom created and they look very nice. There's a lot of animation and movement when it comes to the sprites on the map and overall the game looks a treat. The battle animations are all really nice, too, and flow well.

Sound is well used, with different effects playing via interactions. Some atmospheric sounds would have been nice but otherwise everything fit well and sounded good.

Music fit well with the game aesthetics. It was quirky but interesting and didn't get boring after a while. That said, it didn't really stand out as anything incredible and only a few tunes played over the course of the game.

Writing had a fair few issues when it came to sentence structure, grammar and punctuation. The story itself wasn't well communicated to the player and there wasn't much in the way of characterisation, but what was there was charming despite its faults.

There was no instruction about what to do. You were just plonked on a map and expected to explore and interact without comment or reason. I think the hero tried to make out that they were confused and upset but it just didn't come across very well in the dialogue.

GAMEPLAY Gameplay pretty much consisted of walking around and interacting with events.

The game expects you to interact with objects and choose the right or wrong answers to those interacts, or don't interact with certain items. The idea is to survive through the game without getting to 100 Insomnia points - and certain interactions will add or subtract from those points.

There are also battles that consist of standard jRPG battling conventions. You have items, skills and attacking. Most battles were decently balanced, with a few posing a bit more of a threat (so to speak).

Some items wouldn't be used. The Insomnia cure item, for example wouldn't work and this led to one of my many game overs.

There are some interactions that will automatically lead you to a game over.

ENGAGEMENT I liked the overall charming aspect of the game but there was no actual instruction on what I was supposed to be doing or how we ended up where we were or what we were doing. I was left very confused as to the aim of the game, especially when I started collecting puzzle pieces to fit on a table, which were not explained that you needed to collect or that you'd actually picked any up.

There was also the instant game overs and gradual game over that really made the game a bit of a pain because you'd have to restart from the last save (which is automatic and thus when you enter a new room for the first time) and that got annoying pretty fast.

That certain items didn't work also got annoying, especially when they were supposed to help you not get a game over.

It was a cute game but not necessarily a fun one, despite its charm.

THEME The theme seemed to be finding your way back home but honestly, the writing didn't really help frame that especially with the way the boy reacted as though things were normal - his reactions changed from "this is the room again" to "mum I need help" and the technical issues didn't help with conveying the theme at all.

Mechanically, the game did well in melding the theme - having to interact with strange oddities and fight weird beasties with your own odd skills and weapons helped give the game a dreamlike feel.

Visuals also helped support the idea that you were elsewhere, too.

You forgot to be anonymous for this review, but I also wanted to say thank you, as your reviews having the categories written out is very helpful for the ones you did it for. (I believe 1 other judge also showed these categories.)

This was awesome! I love the art, the battle system was intuitive/simple and the insomia meter wasn't oppressive or stressful to deal with at all! Great job team - and congratulations on completing your IGMC entry!

Nice! Thank you for playing our entry!
Yes, almost took us an entire month just to complete the game arts, glad you like it. :D