Save the land from the evil queen
Submitted by CactusCoder131 — 6 hours, 41 minutes before the deadline
Add to collection 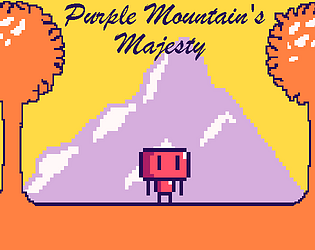 Fun! Simple and to the point, playful dialogue, and boss rushes are always fun.

I couldn't get the webgl to work, but whatever. Windows build ran great!

Fun! Simple and to the point, playful dialogue, and boss rushes are always fun.

I couldn't get the webgl to work, but whatever. Windows build ran great!

I'm a bit pants at boss-rush games, but I had fun here. I really love the art style, especially with the progression of backgrounds.

I think the combat could be improved with a bit more feedback in general, and possibly with a bit more "give" to let the rhythm of attack-dodge-recharge come into its own. But, this is a jam, and what's here are a lot of distinct fights with plenty of charm!

Note: After defeating the bee boss they would fire one more additional round of projectiles, making me lose my last heart and restarting the fight. I beat it the next try after surviving with at least 2 hearts as there was again another shot after death.

Also I found that there was a repeat of text in the conversation with the wizard's wife (around the part where the CHOSEN ONE asks "where am I?")

It'd also be nice to see the player using some item or waving their hands/animation to launch their attack. Unless of course the player is using some sort of "mind" attack (which would be nice to explain somewhere in the story).

Nice, fun, self contained experience. I saw that you didn't get to finish what you wanted to but I like how you wrapped the story up with the ghost callback. Fun writing overall and great use of the palette.

I got the same bug as BagelMaster5000 did with the music after dying to the magician.

Submitted
Groove In The Grove
LikeReply
BagelMaster5000Submitted1 year ago(+1)

Great, short game! Loved the writing: it's exactly the type of humor I like! It seems like you made everything yourself which really adds to the charm of the whole thing. Also, I appreciate the simplicity of the game design and controls.

Only problem was I encountered a bug where very often music tracks overlapped on top of one another. Not sure what's up with that. I noticed it after dying to the first boss.