Help craft potions to stop the sickness caused by the ever encroaching fog
Submitted by TrevSaysHi (@trevsayshi30), S0L — 1 day, 1 hour before the deadline
Add to collection 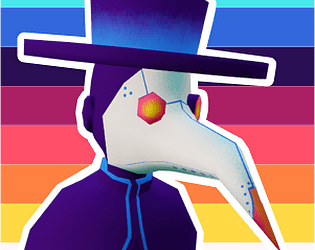 Amazing look. The music was really fire! I felt like I was the only hope of small town in the effort to cure the pink mist plague. The gameplay was confusing at first, but after reading and realizing what I need to do and can do the game became much more straight forward. Being able to go to the same houses, and pick the same flowers made the game rather easy by easily being able to keep the fog at bay.

Love the presentation of this! The visuals and audio really do a good job at creating atmosphere. Getting stuck in the pink fog and losing really drives home the theme of "curing a town from the plague." I also really enjoy the unique concept. Overall, cool game!

There are some quirks though. First, I really could not get used to the inverted camera movement. It felt really unnatural (coming from someone who hasn't played many old-school games) and I also felt that it was too smooth (took a while to catch up to where it was supposed to be). Second, I wish there was a sprint option. The game got pretty samey after a while and once I got into the groove of it all it would've been nice to have been able to progress at a faster pace.

I definitely agree. I have this third person character controller that I've used and I will take that feedback into consideration. I ported it over from Unity before this and I am looking forward to smoothing it out.

I enjoy the idea of the plague doctor healing with various flower petals and really enjoyed the music (though it starting over each time I switched scenes was a little sad ;P)

I didn't really find much challenge to the game as the character seems to have a really significant amount of health. The flying orbs of pestilence were cool but they deal much damage when they'd eventually catch up to me. Lastly, the crafting was reeeeeally tedious. It took a while for me to realize I could use the arrow keys to choose the petals to craft with but even when I did, having to move between three objects to craft one potion when you're crafting a good 6 or 7 each time you pop in can be a little much. What would've worked better for me is have a table of sorts that looks like something to build potions with, maybe have an animation for the character and make all the potions possible (and let the player know how much they made).

Alternatively, you could play off of the tediousness of the task. If while you're in your house the plague fog continues to move closer in, there is more emphasis on making a few quickly instead of making as many as you can. Might be interesting

That is an interesting take on that, I like the idea of the fog still moving. I definitely felt the tediousness during the last day of play testing but I thought it would be better to re-work the UI so you knew what you actually had.

I find the challenge comments interesting some say its too challenging while others have had no problem.

Really liked the idea of collecting samples, then returning to a pocket dimension to craft bigger and better potions. I think some of the more complex systems needed to be fleshed out/given more signposting. Even though I knew what I wanted to do, it was tricky to pull it off.

But, I really did love the interchange between running around, gathering plague samples, then mixing them together in order to advance. Plus, funky beats.

Oh for sure, I don't like the idea of having a giant billboard to explain the game but that was something that really showed through on the last day.
Thanks for playing!

I actually loved that! I think I just had input issues. Really nice work :)

Pretty cool concept. The gameplay was a bit unforgiving and I didn't know if I was supposed to go into pink haze and didn't realize it was killing me until it was too late.

Submitted
Groove In The Grove
LikeReply
TrevSaysHiDeveloper1 year ago

Yeah I can definitely see that. I wander what a good way of letting people know the fog is a necessary evil.