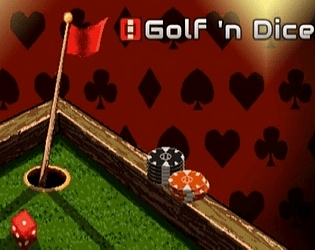 How does your game fit the theme?
It a golf dice game, the "golf ball" is a dice where the roll affects the power of the shot

Nice game. Liked the graphics. Please check out my game.

Thank you for feedback. I will try out your game.

Ergonomy is not very good (Enter to go next dice, Too much color to remember, dice are sometime jumping sometime rolling).

But besides that, it is a good mini golf game with great presentation and music.

Thanks for the feedback! We had some UI and stuff planned but it failed last second....
We're planning to fix some stuff and update the game once the voting is over!

Fun game overall and great visuals, I think the main thing lacking for me is clarity. The dice disappear after putting before it is rerolling, I think some placeholder dice with a button prompt would be nice to see. Then maybe a text pop-up showing you what dice you have, it is hard to tell for some what effect they have without looking at the description.

LikeReply
I beg your RatingsSubmitted69 days ago(+2)

The graphics and the sfx are very good,  the top-down visual looks very unique. The game is confusing if I dont read the instruction below, for example , I dont know how to spawn dice after hit!

Thank you for the feedback =D

Klick "Enter" to spawn again or "backshift" for resetting.

There was a lot of content for 48 hours! The concept is a really neat take on it! Well done! :)

There was a lot of content for 48 hours! The concept is a really neat take on it! Well done! :)

Two other notes while I'm giving feedback, on the explosive dice, if you click and hold the mouse to putt, then swap die while holding LMB, the new dice will retain the particle effects and sound while displaying the other die. The other note is that I think the dark green sections act as hills for the die to roll back towards you. In this case, you could use some improved texturing. Perhaps add some pixels on the side to imply height? Maybe show them as a bridge instead?

Unique concept and satisfying dice roll sound effect. I encountered a bug however since my die just disappears after the first roll and I'm stuck in a scene with no die lol. If this were to be polished further, it could be a really fun game. Cheers!

I had that "issue" too. If you hit the enter key, you go on to the next putting attempt.

you have to hit enter to get a new die, check the controls

Now that the game is visible, it's actually pretty great. Die #1 at the start of the game, I launched it backwards and got lost for a bit trying to get a new die. Reloaded the game, read the description and started over. Second attempt at playing the game, I shot the dice with whatever it gave me thinking I was just unlucky. After trying the different powers of dice a few times, I realized the potential of swapping them. The text "Press enter after putting to roll a new dice" could be clarified a bit to imply something along the lines of "Swapping dice at some times may be the solution to overcoming obstacles due to their unique abilities." Once I figured out how I was actually supposed to play, I had a good time with the game. I'll see if I can finish it.

Yep, the dice switching was meant to be a major element. Sadly we got caught out at the end and weren't able to bring in our core mechanic or any tutorial in time. You were supposed to have an inventory of dice in a menu, so you could pick the one with the desired possible effects before each shot, giving a puzzle element to the game of deciding which die is most likely to be best for each shot. We'll be pushing an update after the jam to restore the game to the intended format!

Cool just wanted you to know so people can play it. When you get it working, I'll give it a shot.

Should be working, give it a try now!

Loads fine. I'll let you know how it is.