You are a dinosaur in a city, get the highest score possible
Submitted by azulesoft (@GamesAzule)
Add to collection 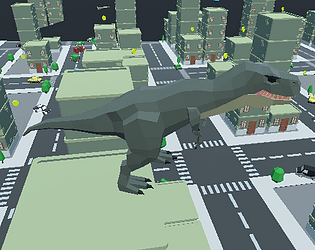 How does your game fit the theme?
You are a dinosaur overturning cars and trees while jets shoot you xD

That was pretty fun! Loved the dinosaur model. Good job!

I think every child at some point has pretended to be a giant monster and destroyed their toy city. Now I get to play that in video game form!

Fun little timewaster. I would have liked biting things to feel more visceral though.

This is the kind of power fantasy gaming needs. The controls are great. Maybe if you go further with this you could add some way to take out the jets or destroy buildings? I wouldn't be upset if the t rex got a rocket launcher

This game is billed as letting you play as a dinosaur overturning cars and trees while jets shoot at you and you know? I was not mislead.

This has the makings of a fun little time waster, in the same sort of vein as that old flash game where you play as a shark and destroy as much as possible. I was a little confused by the bite function which was apparently an attack? I'd say it was for the jets, but it's got far too big a windup to be fast enough for them. I also wish I had one or two more avoidance options to get away from those missiles (or else a better way to regen the lost health) but I still had fun with this! A cute idea that turned into a solid prototype.