Two planet neighbours shoot energy balls at each other. Beware of the gravity!
Submitted by aslogd, albertvaka
Add to collection 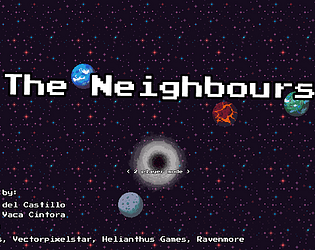 How does your game fit the theme?
Your shots are affected by gravity and only disappear when they hit. If you miss, your shots will stay around and out of your control.

I wasn't able to launch the game (a shame, because it looked interesting), however based on the other comment this may just be an issue with my system. I got the following system error:

The code execution cannot proceed because VCRUNTIME140_1.dll was not found. Reinstalling the program may fix this solution.

I tried both re-extracting and running as admin but that didn't help. I'm assuming I'm missing a library of some sort? I'll try to remember to try this later on my home computer and I'll update if there's a difference.

This was on windows 10 btw.

Sorry it didn't work, that's our fault. The missing file is part of the Microsoft Visual C Runtime which our game uses but we didn't include in the zip... It works for most people because the file is already there on their systems (which is quite common, since many programs and games use it), but we should have included it just in case.

Just FYI (if this ever happens to you in the future), you can download it from the official Microsoft site: https://www.microsoft.com/en-us/download/details.aspx?id=52685

I like the framing of interplanetary battle just being two rude neighbors being cross with each other haha.

The gravity part felt kind of inconsistent though.  Like I expected the shots to arc around the black hole in a way that makes sense, but it just seemed like the shots did whatever they wanted, especially once they started bouncing around all willy nilly.  It adds to the chaos, which is fun, but it made it seem more like luck than anything else to hit your opponent.

So, all in all, cute fun game, but maybe tweak the gravity mechanics. =)