Fight against your cursor!
Submitted by Zekturb — 9 hours, 48 minutes before the deadline
Add to collection 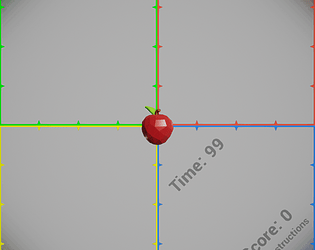 How does your game fit the theme?
As the difficulty increases, the clickable windows scramble more and more.

Really interesting! It felt a bit weird at the first try but after you really understand what's going on the game becomes a ton of fun! It might feel a tad bit weird to play if you're color blind tho xP

Interesting concept. Took some getting used to but once you got into the rhythm it was pretty fun.

This was really fun! And the later levels added enough twists to keep it interesting. Sometimes the game said I had missed although the green cursor was clearly on the apple or I hadn't actually intentionally clicked. This might be caused by me playing it on a touchpad, though. Also, it would be nice if the hit registration was generous enough to allow this game about touchscreen calibration to actually be played on a touchscreen. Maybe the relationship between the small, scrambled squares and the big clean squares could be the other way around to make it easier to control?

Took a little while to understand what was going on, presentation could use a little work, but once I figured it out it was a very fun and interesting little game!

The idea is straight-forward, but it feels so weird to play! My high score was 56.

Really good idea, took it further than i could have imagined this mechanic going. Highscore 51 B)

Submitted
Shituation Out of Control
LikeReply