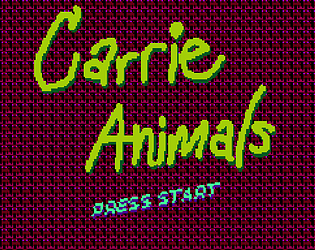 The controls are a bit junky but the concept is really great, i believe the level deisgn is really the weak spot of the game, for instance the first level  you start and the first thingyou see is penguins, i read the game page so i tried to pick up one (btw i couldn't figure out what their power is), but what the level is actually trying to teach is the power of the bird which is first offscreen.

And i agree that is too easy to get stuck in the second level, do not fear getting the levels bigger, especially with that kind of movement speed, you should introduce powers one by one (although i understand level design is a long task to do and it's complicated during a jam), like make a safe zone where you can test that power, it should be kind of obvious as the power is, like for the whale, but it's also a good example to showcase the difference between with and without, you could first make the player go in water and notice he can't swim up, then he find the whale and is able to go up and out of water.

I suggest the videos about making a mario level from GMTK, as mario as exactly this kind of mechanics and level-design.

Otherwise the music and sound effects are great, the art too, good job ;)

I thought my first level was the tutorial. lol. It's too complicated! I have a newer first level that I will publish on Friday that is the "first level of super mario" teach you to play stage. It's much better.

I'm wondering about the controls. You're think they're a bit junky, do you mean they're too fast and unrefined? I should have some ramping curves, etc (I think Mark went over this in the Celeste video)?

I also don't want any chance of locking the level, so I really have to think about how I'm going to make that possible.

Thanks for checking it out, I really appreciate the comments!

About the controls, yeah, they lack precision, the horizontal speed is way to much compared to vertical, i believe some acceleration would help on it yeah, would be great to also reduce maximum speed to avoid running faster than flash ^^

not talking about locking the level but making it a bit bigger, and better separate the different areas, you don't have to lock the player and prevent him from coming back, you just have to present a problem, then lead to a solution, here's some rough drawing for what i said about the whale, keeping in mind that the first level introduces the bird and the multijump, here's how you could design the first part of the second level : 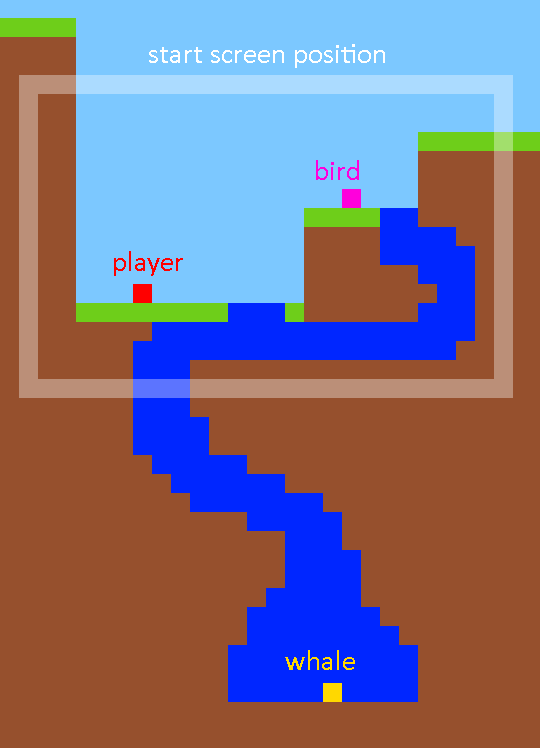 The player know he needs the bird to get up to the top right corner, he would see the water tunnel connecting the two areas, but when entering the water he would notice he can't swim up, the only way he can go is down, where he will find the whale which will obviously be the swimming up ability, this way the player know what it allows him to overcome, it doesn't have to be this straigth forward all the time, but it is better to present a obstacle, then either it leads to something that allow you to overcome it, or later on when you find something new but not particularly linked to anything it will make the player wonder about what it does, then he might think about that passage with water he couldn't get to some passage, he would then want to come back and try to use a whale here.

Also, about the checkpoints, you shouldn't make the game save each tim you pick an animal (if it's the first time maybe though) because if you get stuck to some place and pick an animal it would save to this point but you would still be stuck when you reload.

Lastly, the end of the second level i ended up having all animals in the same place, picking the right one was really hard, maybe holding Z could bring up a menu to select one of the animals which are in range of being grabbed ?

Hope it helps and that i'm not to harsh.

No too harsh at all. That's why I do these things! I really appreciate it.

I like the whale level. My second level is a bit like this, where you have to swim up to the beaver.

I think you're showing me that I need to be a lot clearer in what the goals are, and I can push certain aspects a little further. The game does teach you how to swim when you first get the whale, but I like your idea of going much deeper. I think your level makes more sense than my second level!

I think with that the design goal might be to really exaggerate the skills of each animal. So if you have to swim, really make the player swim. If you have to climb, add a lot of climbing, same for flying.

well yeah it's better to exagerate (at least a bit) because for isntance when i got the whale, i got in the water and grabbed to whale then started swimming, but i didn't understood that it was the whale power, i tried dropping it but then i sunk lower than were the whale landed and had to restart, the beaver was clear though, and the end of the level was good enough, though a bit cramped, had a difficult moment grabbing the right animal.

Also should probably add an info of how many animals you got, for the fox for instance i could have missed it and wonder about where the last one is, and it would be better for bigger levels if you have this, the larger it gets the more frustrating it would be to see the level doesn't ends when you thought you brought every animals

The central mechanic is fun, it adhere's to the theme, the application runs correctly, good stuff! my two bits of constructive criticism are 1) Checkpoints are your friends! If you don't want to learn how to make them, then always try to design levels where it's not so easy to bone myself :-P 2) the movement speed was a little over the top. Slowing Carrie down and zooming in the camera could go a long way towards making this look more compact and polished.

good idea, maybe when you grab an animal it checkpoints the level to that spot.

Thanks for checking it out and taking the time to share some ideas!

Dude this is a cool idea, I had a lot of fun playing your game. I probably would've felt less dumb playing it had I read the description on the game page lol. I really like that the game's title kind of acts as a tutorial. The art also looks pretty nice. My only issue with it is that it is way too easy to softlock on the second level.

Submitted
Gravity... But Not Really
LikeReply
MatthewDeveloper196 days ago

I definitely need to fix the puzzle locking. Some character dialog / prompts would help too.