A galaga type game made for the May Jam
Submitted by ViolentCrumble — 11 hours, 3 minutes before the deadline
Add to collection 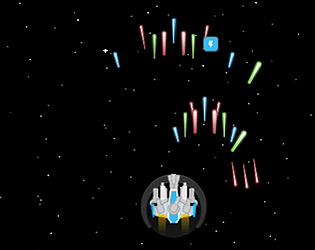 Talking points of your game
It's galaga! shoot everything and try to get the highest score!

What Assets did you use?
Music was made by the talented Gary M from Game Dev league. - https://clyp.it/user/pklm5wkx contact him here > exkage@yahoo.com

All sound effects were made by me on a Blue Yeti.
All art was made by Kenney over at Kenney.nl

nice entry, could become a lot better with a bit more polish, though I understand you didn't have the time to do it^^

Some quick improvements would be balancing the volume of sound effects + background music,  and early implementation of some algorithm that increases difficulty. It still was fun while it lasted!

yeah the difficulty really bothered me, I wish i could of made it more linear and gradually getting harder. I'll work on this.

thanks for playing and rating ;)

This is a nice game. I liked the graphics and gameplay loop. The controls were nice and tight. I enjoyed it a lot.

This may sound nit pickey but try to stick the the theme completely. By that I mean use an appropriate font and screen effects. Consider adding some Chromatic abberation (in the unity post processing stack), Bloom, Film grain or some Scan lines ( even I couldn't figure out how to add these to my game :( ) to make it FEEL like you're in an arcade on a machine or maybe even on an old computer

The sound design was cute however it was very clear that it was just you going pew. Maybe up the bass and distort it a little. Try open source sounds or get creative. Slam a door shut for an epic explosion or slam down on a stapler for the nice metalic clang of lazer ricocheting off a metal hull.

Another issue i had was regarding 'game feel' Mark brown made a nice video explaining it (linked below). Add some screen shake and Bloom (it is in the post processing stack made by unity on the asset store). Make the bullets pop and feel important. Consider using a particle system to make them glow and pulse to look vicious and dangerous. When the ship gets hit, make it flash or look like it got affected. That's in my opinion what will push this from interesting and good to great.

P.S: I know this is long and mostly negative. However, I really love the game and i see great potential. That's why i care enough to write an essay on your game.
Submitted
Hyper Pong Extreme
LikeReply
ViolentCrumbleDeveloper4 years ago(+1)

np thanks for the feedback and for playing and rating my game!

All this was planned, just ran out of time sadly.

The beginning is a bit slow but when you get your first upgrade the game really picks up. It does get to a point where I could just sit in the middle of the screen and spam the space bar to win. If you could capture the difficulty of the middle part of the game throughout I feel the game would be better paced.

Thanks so much for the feedback! it is pretty accurate. I did attempt to scale the difficulty up but i ran out of time!

Thanks for playing and leaving me feedback, I will try to refine further post jam :)