Swoop around on a flying book to silence the noisy bookworms in Libraryland.
Submitted by andyman404 (@andyman404) — 4 hours, 1 minute before the deadline
Add to collection 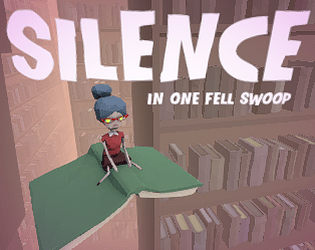 Talking points of your game.
As the librarian of Libraryland, you must protect the slumbering books from all noise. Hunt down the noisy bookworms and drop them in the drop-off boxes to silence them.

Hint 1: The bookworms are afraid of heights and usually live on the ground or on the tops of only very low bookshelves.

Hint 2: The librarian can see the faint ripples in the air generated by the noisy bookworms' soundwaves when close enough.

Note: The library map and bookworm positions are randomly generated in each playthrough; some playthroughs will be easier/harder than others.

You can also just ignore the bookworms and just have a relaxing fly-around to enjoy the library's bizarre procedurally generated architecture.

Did you know... Each book is procedurally generated, and has a twin on the other side of each shelf. Each shelf is completely unique. There can be more than one hundred thousand books in the library. Thanks to a short draw distance (hence the fog), and custom GPU instanced shaders drastically reducing the draw calls, the game can run at a reasonable framerate on modern GPUs. I ran out of time, but the books would have been capable of jumping off the shelves because of the noise.

What assets did u use? Link them here
I made all the 3D characters/environment/props, and scripting for the game using Blender, Substance Painter, and Unity.

The music, camera filters, fonts, and the silence icon were 3rd-party assets:

Silence icon (on the drop-off boxes) by TrentoF------City from the Noun Project
https://thenounproject.com/icon/77879/

Fun indeed! After finding my first worm(which took about 2min) I had no trouble finding the rest!

Though, I'm pretty sure I spotted a worm which was emitting no sound until I clawed it

Thanks! The worms and book stacks are completely randomly generated - so sometimes it's just the luck of the draw. That one odd worm must have been a leftover from when I was experimenting with them.

Earlier on in the jam, the game generated 100 worms (some higher up on the shelves), most of whom were silent and well behaved residents of the library, and you were only supposed to grab them when they were making noise (they started/stopped making noise on an random basis when left to themselves). Grabbing any of the silent ones would cause it to make noise, and cause nearby other silent worms to make noise. Bumping into walls or floors while carrying the worm would cause you to drop the worm.

The only problem is that I couldn't figure out a victory condition for the game, so I dumbed it down to this current "find 12" state in the last few panicked minutes that I had available during the jam before I had to head out for a previous engagement.

This game is really fun, it has a nice art style, the gameplay is fun, it fit's into the theme perfectly, although my one complaint would have to be that, when you get to the last 3, it's really hard to find them, it would be cool if there was a mini map after you got to the last 3, but aside from that, it's pretty decent :D

Thanks! Yeah, I agree - the game really needs a minimap, or a smaller library, or much larger sound wave effects so that the bookworms are easier to find. I ran out of time and totally didn't get to even play past 1 or 2 bookworm dropoffs.

I seached for like five minutes at the top of the bookshelves. It was really hard to know what I was looking for at first, restarted the game once because I thought I missed something. It had a pretty slow pace for my taste. I really liked the free flying and the big explorable library, nice design!

Yeah, the pace is a bit slow and the library is too big. I ran out of time before I could balance it or even play to the end. I spent too much time during the jam just enjoying flying around before I started on the hunting portion.