The adventures of hyper snake trapped in euclidean space
Submitted by dzejkop — 20 hours, 49 minutes before the deadline
Add to collection 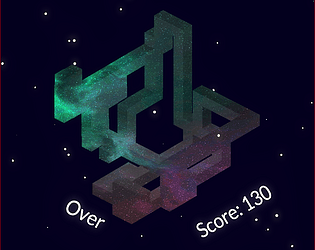 wooow i like the very calme atmosphere, nice music, awesome feedback and graphics. Thanks for this entry , a excellent little game !

Thanks, glad you enjoyed :)

This is a neat little game!

At first, I had few difficulties understanding the controls, but after collecting the first glowing orb, and therefore expanding my snake, it became much easier. But even then, roaming in this 3D environment felt a bit confusing and it did really require a good amount of focus in order to not enter the wrong plane, and to not collide with your own parts. All in all, it's pretty much snake, but with the addition of five more planes to roam on. The concept is simple, but I found it fun to play!

I have to say, that the graphics and sound effects are well made! I like the isometric view, the otherworldly textures of the snake, the calm music in the background, and the mysterious vibes of this game in general, which really make for an interesting experience.

Overall, this game is short, simple, but has an unique style and idea, and plays well!

Thanks a lot, glad you liked it!

I got a highscore of 70, took me a bit to understand that it's a snake in non-euclidean flat space, and not a 3D snake (which would have been much harder to control)

Gameplay is pretty good, graphics and audio are really nice but my frames struggled quite a bit especially when moving. Might be some Godot issues with forced FPS, I ran into this as well (in 2D)

Innovation is good, but I don't see the link to the theme.

I highly appreciated the white lines helping directing the snakes, and the dot pattern on the cube sides.

Yes, unfortunately Godot is not that great performance wise (here's to hoping for a change in 4.0).

And congrats on the score, 70 is not that easy to get to.

I really thought the link to the theme was obvious - you're a snake bound as in trapped in 3D space in a box and you have to leap from wall to wall to move.

Oh man this game is awesome! I love the space coloured snake, the controls took a minute to sink in but became very intuitive, the music is nice and the game is addictive. Well done!

Hi dzejkop, I have downloaded your game. It is so good that I was playing the whole evening. The graphics are awesome. I really like the space-like visuals. The movement was pretty hard for me but it's good cause it makes you focus.

Unbelieveable beautful game! You really know what you're doing! The graphic, the sound, the ui, the feedback, all perfect! A 3D snake is a brillant idea! The only thing that frustrate me from getting high score is that, I really can't master where I am rotating, a wrong rotate at high score, you know, die...

Thanks a lot, your comment really made my day, glad you liked it :)

Good joob, it is an interisting puzzle game!