So You've been CursedView game page

A disgruntled witch curses you to face your conscience
Submitted by Nick — 29 minutes, 8 seconds before the deadline
Add to collection 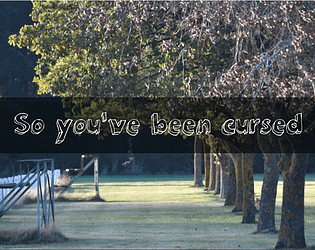 So You've been Cursed's itch.io page

Haven't used Go Dot. But interesting to see some Interactive Fiction in a Jam. Good narrative a key. Liked the mix of still and animated images. I hope all actors received Hollywood-type salaries, after some of the events that took place. They sounded like they needed stunt doubles. Impressive work if done within 48 hours? Look forward to seeing more from you guys and if you get a chance or haven't already, check out "Her Story".

Really nice! I love the live action approach and the quirky story.

Nice narration, it's always nice and I think especially since you used photos and videos, having a live voice helped keep it somewhat based in reality. Narrating it all would've been a lot of work but it was nice to at least have the start and important moments narrated. Cudos for going outside too :P that's something I could've done more of during the jam haha. I pretty cute little story, kinda reminded me of a modern day fairy tale, something goes wrong, person goes on adventure, eventually it works out, or it doesn't... I like that there were different endings and paths, so choices actually had some meaning. I especially liked the walking videos between locations. A lot of games leave that kind of thing out and just teleport you to the next location, so I found those to be really nice. Oh, and damn, I feel like I haven't seen a Four Square in ages! Bit of a blast from the past :D. Cool work!

really liked this one

A very neat experience! I do wish it was fully narrated but nonetheless I really enjoyed it!

Yep more naration would have been one of the next things if we had time! Glad you liked it and thanks for playing :)