Submitted by Oekimo (@Oekimo_WGW) — 18 hours, 19 minutes before the deadline
Add to collection 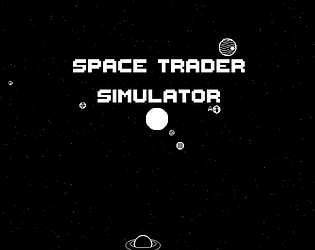 Theme
You connect the planets with trade.

I think this is a good set of visuals and programming, but I think it would work better as part of a larger game. I'm reminded of yahtzee croshaw's old game "adventures in the galaxy of fantabulous wonderment", which had a similar trading system but less advanced (such as not having the neat orbiting destinations). One important difference is that one had plot and gameplay reasons for not just switching between two planets the whole time trading two goods. The fluctuations in price don't deter the strategy of just hogging one trade route and two goods. For example if there were only one planet to get each upgrade and one planet where fuel is cheap enough to be a good buy, that would encourage the player to plan out more complicated routes.

Other than that, the only problem I see is that having to click 30 times to fill or empty a level 2 cargo hold is tedious.

Thanks for the feedback. I was hoping to add random events to make the solar system seem more alive. I totally didn't think of having to click so much, I will be reworking the cargo system so you only deal in full cargo bays.

It's a fun little trading sim, and it has a nice feel to it with the sounds and art style! I screwed myself over though buying fuel, thinking I could sell it to other planets! Fun little simulation! I could easily see it as a mini-game for a larger game in order to get more cash! You did good! The only difficulty was having the "Buy Menu" sometimes block the way of the planets I wanted to travel to! I also liked the little "Not to Scale" at the bottom of the screen! It was a nice touch.

Thanks for the feedback, I agree with you on the "Buy menu" getting in the way. I should have added on on screen button prompts to show the keyboard commands to select planets. Originally, I was going to have a minigame you could play on the planet to make money but I had to cut it for time. I am glad you liked my game.