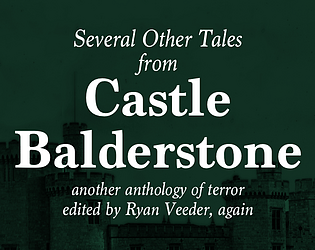 Which category is your game in?

Which theme does your game fall under?

This was a delight from beginning to end—though I wasn't sure if it was actually supposed to be the end because it was so abrupt. But I loved the variety of perspectives and moods and tenses, and also entering commands I've definitely never typed before in my life.

Interesting idea to use people's own words to customise the story :)

Interesting game, you write your own version of the story, I really had fun with that :)

Argh, I can't finish the story about the vampires :(

That sucks! There is some machinery in there to prevent unwinnable states but it might not be (probably is not) 100% effective. Some spots you might check out: The grotesques in the first room, the statue on the balcony, under the bed, inside the casket (and the statue of Aeternitas), the feasting hall table, the urns in the ancient tomb, maybe the shelves in the laboratory, maybe the bricks on the roof.

This “machinery”  works by transferring “leftover” attack power to unused weapons when you deal damage in excess of a monster’s remaining HP. If you can access the final boss, you should be able to access all the weapons, so the game should still be winnable—unless the power-transfer somehow sent some attack power to a weapon you’ve already used, which would be very stupid, but I *think* I prevented that.

On the other hand, before you unlock the final boss, the game could transfer some critical quantity of attack power to weapons gated behind the enemy who you need that attack power to defeat. The code is not sophisticated enough to prevent this. So it might be a problem.

If you restart the game, you’ll start at the beginning of the vampire-tale, and the spare damage will probably be allocated better. Sorry.

Thank you! I actually had some issues with the puzzles, but your explanation of the weapons system in the game reassured me enough that I felt okay taking on more of the monsters in the game. Anyway, I finished the game! I think my favorite story might have been the Afflicted knock-off.

I enjoyed the Inquisitor's story, I genuinely felt a bit sad about UVF PNCR.

A Nice Drive reminded my a little of the Far Side cartoons. I also liked that is was written in the past tense.

My own story I didn't really care for, but I guess I only have myself to blame.

The Banshee's Curse was cute, I wasn't expecting it to end so suddenly though.

Thanks for bringing us along, again.

Submitted
The Curse of the Scarab
LikeReply