Platformer in the dark with some cool pig fighting action
Submitted by Jeepitou — 1 hour, 12 minutes before the deadline
Add to collection 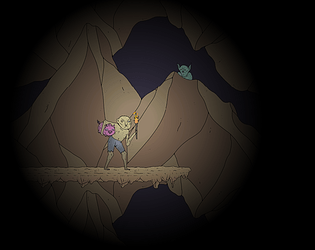 Nice game, the music and art are amazing!

The art is really good, and the music is as well. But there are quite a few problems with the gameplay.

The biggest one is that you have to rely so much on memory to get by. You have to remember which platforms are where, and where the enemies are. I know that you can throw you're torch, but I just ended up throwing it into down the void most of the time.

The movement itself works, but it is very twitchy and the jump feels pretty dead. It is totally acceptable for someone creating their first platformer. GMTKs video on celeste gives some pretty good info on how to make a platformer feel responsive but not twitchy. If you want to improve the jump I think board to bits has a video on it titled something like four lines to a better jump.

The hitboxes feel to big. Especially for the player.

That was very weird and silly (in a good way). There is definitely room for improvement, but for a 72 hour game jam, that was very good!

Wow how did you make it look so good in so little time? Throwing the torch is quite an interesting mechanic, wish I had thought of something clever like that! Can feel a little bit punishing if the torch lands somewhere I don't want it to be and I have no way of regaining orientation, but otherwise top notch!

Submitted
A Boi And Their Bat
LikeReply
JeepitouDeveloper1 year ago

Thanks for playing! I can only thank my good friend oodnuf for the beauty of the game :) Yeah the game is quite punishing, at least I added a checkpoint system at the very last minute to make it a little bit more beatable

10/10 would accidentally throw my torch off a cliff again.

Submitted
Scarlet In The Dark
LikeReply
AcropoliseSubmitted1 year ago

pressed space to jump, threw torch into the abyss instead. 10/10 too relatable

A very interesting game, it's rather complicated, the theme is clearly respected, the game is really beautiful, but a jump animation is clearly missing. Otherwise a very good work :)

Yeah we didn't have time to do all the animation that we wanted to sadly. Thanks for playing :)