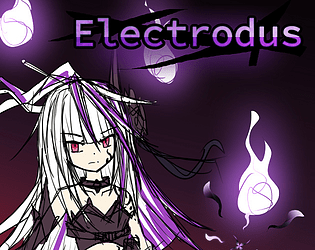 What was the size of your team?
3

Not really a lot of fun, you just fight wave after wave. I'm not sure how I am dying. I don't think the UI works and the game just keeps going after you die.

You have some polish but the audio makes me feel like I am listening to popcorn popping then blowing up bad guys.

The art on the main character looks cool but she just doesn't feel like she belongs in the worlds.

For the future, I would say don't sacrifice functionality over anything else, that should be priority number 1. Secondly, don't just make it a shooter where you point and click, that's just too boring. Add something that makes it stand out. Finally, keep the art consistent. You have a well drawn out character but everything else, the background and 3D bats feel rushed. Also add an attack cursor because I can't see the mouse among the projectiles.

I like the character design and simple palette with just a few striking colors, music was pretty nice as well.

Movement feels a tad bit too fast and floaty i feel, but nothing a bit of tweaking can't fix.

The only thecnical issue i encountered, the game seems to softlock when you die, i had to alt F4 and restart the program every time since there's no UI showing up upon death to allow for a quick restart.

Other than that the care and effort you all put into the entry show,

The main character was pretty and the music was very nice.

I liked how smooth the character movement was, but it felt a little too fast for me.

The graphics felt a little out o sync though, like they were not made in the same style.

Overall it showed potential, but missed some visual consistency and bug fixing.

Not sure if there's anything more to the game than those couple of enemies and that one boss, it could use a lot more varied gameplay.  The movement is rather awkward for a bullet hell, it's floaty while it should feel stiffer, though it's also pretty hard to see when something's hitting you, it's all kind of confusing (and the screen soon gets filled with bullets all of the same pattern that don't really seem dodgeable unless you just circle around the screen). The sound effects are pretty distracting and don't really match the gameplay, particularly the enemy shot sounds being... piano notes? or something like that. Also, I see what you wanted to do with the point item stuff getting pulled towards the player, but they should get pulled 100% all the way to the player once you get within range or hover over them, because as of now they stay there halfway if you pull out too much, and it's pretty unsatisfying (also they could use a graphic upgrade instead of just being spheres, but understandable if you couldn't do so due to time limits. Just adding a color and emission/light would make them look better though, I think)

I'm curious to know whether the 3D was made for the jam, because if so that's pretty impressive, I like the player and boss models, and the background is cool too. A bigger game with that aesthetic and that character design could be nice.

Thanks for the feedback! And yes our artist did make those 3d models himself, everything in the game was made from scratch

Fine game! I love the visual, the chara design is great! The bullets could be clearer, and showing the hitbox could benefit the gameplay. It's quite fun, the music is good too. Some sfx are nice, but it needs diversity, they can become annoying after a while. Also it's pretty buggy, but it has good potential, would love to see it updated!

Cool visuals and art in general but the bullets have to many visual effects. Half of the time you can't see if a bullet hit you or is anywhere near your hitbox.