Taking Out The TrashView game page

You have a big bag of trash, jump your way to disposal
Submitted by beautiepie (@beautiepie1) — 22 hours, 50 minutes before the deadline
Add to collection 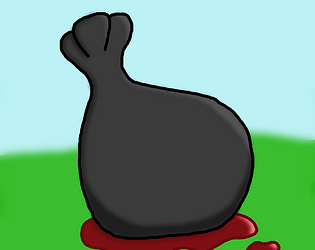 Taking Out The Trash's itch.io page

How does you game fit the theme?
You have a ghost following you around and talking to you, making sure you're not alone.

Did you write all the code and made all the assets from scratch?
All code and most of the art was made from scratch. Ghost and player models were taken from a previous project. Audio was taken from outside sources.

Nice entry, I really enjoyed the concept and thought the ghost model looked cool, one thing I learned that might help with some of the jittery movement is if you're using a rigid body and set it to interpolate it might move a bit smoother.

Thank you@ I will have to look into that, thank you for the suggestion!

Submitted
Dear Earthlings, You're Not Alone
LikeReply
beautiepieDeveloper95 days ago

Pretty fun platformer, sadly I got stuck on the very first level as there was a platform I was unable to jump on.

Yeah, I'm glad you found it fun! I'm going to assume the issue lay with a moving platform? I know where the bug is and tried to fix it to the best of my ability but there were limitations to it. You should be able to jump if it's at the top or bottom of it's movement but I know that isn't ideal.

No, there was a platform that was too far to the side and not in front of the player I got stuck on    :(

i suggest a checkpoint system because some platformer are hardly visible and have to be memorized because it is hard to be seen. but other than that i love the art and contrast of the character which is the opposite from the art.

Thank you! Yeah, unfortunately I'm not the most experienced with coding so while I wanted a checkpoint system, I didn't want to risk breaking anything I already had in place but if I continue working on this, I will definitely implement one!

Didn't realize it was the ghost of the body until the end of the first level :) great job!

Takeaway: cute ironic platform game that plays well, except for the (big!) perspective issue in level 3. I would have just liked the ghost to have had taken some part in the gameplay, as it would have added originality and a theme-oriented twist to your game, and more variety to an otherwise classic platformer. I did not expect the dark humour contrast at all, this may be one of the salient features of the game! X)

Thank you for all the feedback!

I don't want to nag but there are possibly easier ways to get rid of a body.

I had fun playing that 2.75D jumping puzzle. The movements felt smooth and the ghost was funny.

In the second half of the third level it gets difficult to see where you're supposed to jump. A checkpoint would have been nice.

The player model was cute. You should animated it for the next project.

You're probably right but thank you! I'm glad you enjoyed it! I understand the wish for checkpoints, I wanted to put them in but I'm still pretty inexperienced with coding so didn't get to. But thank you!

That's the strongest coffin carrier I ever seen xD

Nice 3D platformer you got there! I actually had fun playing it and the jump sound effect gave it a nice accent.

Thank you! I'm glad you had fun!

I liked the theme of the game, being silly and dark. Also the jump sound effect was a nice touch! The camera controller was a little rough. I had a similar project in the past, I recommend using the Cinemachine Dolly feature. Its a lot smoother and pretty easy to implement, especially if you're going left to right from the side.

Thank you, I'm glad you enjoyed it! I'll have to look into it.

Thank you, yeah it kind of is.

Nice Game. The art is good and nice storyline. I guess there was no way to stop the player fall in level 3?

Submitted
Will You Be My Friend ?
LikeReply
beautiepieDeveloper100 days ago

Thank you. It is possible to complete, it's just very difficult

Submitted
You're not alone
LikeReply
beautiepieDeveloper101 days ago

Thank you, I really appreciate it!

Thank you! I'm glad, I worked really hard on it!

I was not expecting that! Dark, but surprisingly cute. I like the music and the quotes from the soul.

Thank you! I really appreciate it!

The gamy is pleasant and relaxing! Graphics are cool, but you could add a background. I like it!

I love how the game is so cheery for a game about disposing of a body! Good job!

Cool game, I enjoyed the talkative ghost and the graphics was cool. Something to improve on is maybe the 3D models? Or the background scenary. Overall a great game and eye-catching submission. If you would be so kind to rate my game, but its entirely up to you :)

Thank you, I'm glad you liked it! Yeah, 3D art isn't really my strong suit, I am trying to work on it though!

Interesting graphics, good idea. It was fun to play. Come and check my game as well.

Thank you, I'm glad you enjoyed it