Help family to move on from their home. As fast as possible, and without damaging the owners property.
Submitted by David Svezhintsev (@daveranan) — 3 hours, 54 minutes before the deadline
Add to collection 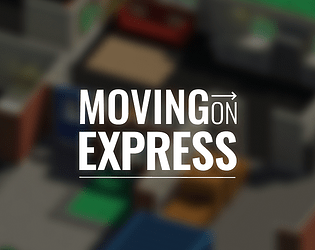 Side by side gif of gameplay and graphs (You can use shareX screen recording)
https://www.youtube.com/watch?v=XyO9LgwqtxA

Crazy that this is your first game, a game jam is the perfect entry point and this is a really nice start!
Really like how immediately evident the theme is here, even without the smart title that managed to include it literally :). Great aesthetic for the house and items too.
I think 3 minutes and the amount of objects to grab sets a well balanced pace for the experience too.

Some critique:
- The characters movement felt very stiff and awkward, leading to moments where it was difficult to try and step your character and its rotation around to pickup an item. Some games play to that awkwardness, but here it just felt regrettably jarring.
- The box hiding under the table felt cheap. If you could set a precedent for objects needing to be found it would be a neat discovery moment, but in this case it just felt unfair.
- Dropping objects in the truck felt very loose and often I had to press space multiple times or move around to try and find what felt like an invisible 'correct location' to drop the item, even when the zone was highlighted blue.

Some suggestions-This is personal preference stuff and all depends on what kind of action and experience you wanted to deliver with this, but hoping it helps you consider more for a post jam-next project moving forward if you get into games after this first experience ^^:
- Reduce the truck size by 2 depth (so 2x4), and have the stacking size of objects be considered when placing them in the truck. This way you'll add an easy to recognize and engage with layer of light strategy, making a player need to juggle in what order they move items into the Truck.
- Remove the energy bar of the sprint, and instead make it so you can't turn while sprinting. This helps move the focus back to the action of moving the objects around and gives more impact to the feeling of holding it vs not holding it, while giving simple moments of contrast as you move around the level.
- Change it so that instead of just losing money while bumping into something, the box drops upon impact too. That'll create a more impactful and recognizable 'oh no' moment and break up your activity, making the trip to a box and the trip back with a box feel more varied. Refining the characters movement while also making it a bit more slippery would make this part of the gameplay loop more tense.

Overall I enjoyed getting to play this entry, well done :).

Thank you for the feedback! I agree with all points and all of them were actually in my plan, I just fell short cause of lack of knowledge of  creating games. Re coded several parts 3 times using different  implementations. Banged my head few times as well, haha. Will definitely be spending more time on character next time. I had it way better with CharacterController but had to redo everything for Rigidbody, and man it sucked after that. Lots to learn, thank you for sharing your critique :)

A nice and polished lil' game! Some more obstacles would be nice, or maybe some feedback when I hit the wall. I really like the stacking aspect, and it'd be nice if the color of the placement thing changed to idk green or red while stacking :) Great work!

I am so impressed with the fact that this is your first game. Great job on the stacking mechanics. I would reconsider locking the characters movement to a grid, especially since the grid movement is not always consistent (when already moving the character turns around, but tends to lock back to the grid).

Nice touch with the disappearing walls!

Thank you so much for the feedback! I definitely should. One of the mechanics I didn't get to fully implement was "damaged property", e.g. if you bump into stuff while sprinting or if you bump into walls with the boxes it will remove $ out of your paycheck. And $ would be used to get bigger trucks, and expanding your moving company empire >:D Definitely need to look into power ups mechanics, incentives etc!

As another idea I just had... Since the house is modular, I might need to explore "rogue-like" dungeon building... Add enemies. Restructure the game into a fantasy theme where a dark lord sends you to get his stuff over to a new place... Okay, this is epic!

Thank you again, feeling very inspired to start making on top of this one! :)