Submitted by lolfrad (@lolfrad) — 8 minutes, 56 seconds before the deadline
Add to collection 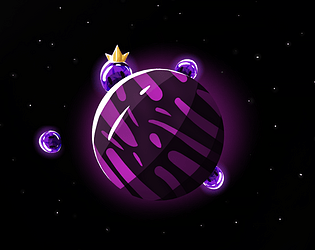 This might be the best jam game I've yet to play, or it would have been, if the game didn't start to glitch once I'd played for 40 minutes, and finally stated getting some black slimes. On some planets, when I were to land on them, my ship teleported across the map, and in the end, when I had about 12 black slimes, I got teleported out in the middle of nothing, and my ship dissapeared. But still, it was an amazing game none the less, and I enjoyed it quite a bit. It was a bit dissapointing that the game doesn't have sound, but overall, a great game.

Since you're using unity, making a web version of the game, might not have been so bad an Idea. That does make more people try your game, and tbh, your game deserves to be played. 11/10, would recommend

You did a very good job with the visuals! Watching the little slimes jumping is mesmerizing, haha! I think that the game would be better with if there were a little more asteroids.  And of course, adding some music, or at least click sound would improve the game a lot :)

Such a beautiful game. Shame there's no audio.

The artstyle is adorable! game has a real Slime Rancher feel. controls can be a bit frustrating at times, but I like the mechanics of collecting and breeding slimes, very addicting

Nice game. Like the visuals (especially that slime balls jupming around) and the theme was met.

Anyhow, no music is a letdown. Also the controls could need a little tweaking. Turning gets really fast when holding down the arrow key too long. Getting away from a planet doesn't always work and you ahve to try more times.

And please add a tutorial. I was stuck because I didn't know how to get the violet and yellow slimes, but I found it out over time.

Anyhow, i was not able to finish the game because I could only get 2 black slimes from a random asteroid...

I would really appreciate it if you rate my game too ;)