Play as Marol who got teleported mysteriously during a conference meeting.
Submitted by Mint Eye, SpiralFlip, FrancoisLampron, Ajey D. (@AjeyDhoble), Ellie, daygleaux — 11 hours, 24 minutes before the deadline
Add to collection 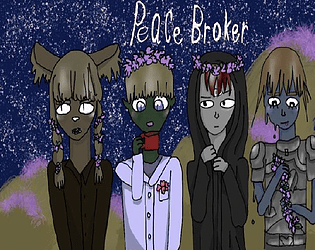 It's a short but nice visual novel! I'm sad what happened to Ylivea cause she was starting to be my favorite character. I didn't expect that twist with Marol without saying any spoilers (I got the Marol ending).

I know it's a 15 minute game but I feel like the characters could have been more developed. When that thing happened to Zan, I didn't really care about him which heavily influenced my decision so I feel that most players would probably do the same. Decisions should be difficult to make, if that makes sense. It would have been interesting to see more routes taken in the story. I'm wanna know how Marol developed that drug.

Overall, great job on the game!

Thanks a lot for playing our game! We agree that ideally the story should be fleshed out deeper and expanded, but we were trying to keep it minimalistic due to the time constraints.

Did you try all of the endings?

Glad to see you enjoy our game :).

I didn't get all of the endings. I wanted to try out a bunch of submissions to provide feedback to people. But I might revisit this one later :)