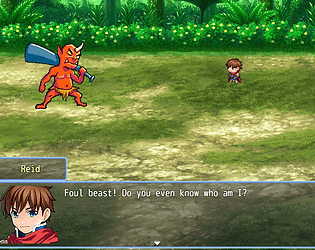 You have three different points of impact that could easily win this competition by themselves, but you mixed them together into a badass AS. If you don't win it's rigged.

Awesome submission as always! The impact is tangible, and even better, Reid is the victim! Is it usable in a game outside of a cutscene. . . who cares! I mean it actually would work I think. The freeze framing, rotation, clever sprite resizing - all so perfectly done.

For the purposes of the cutscene, it seems a little weird to that Reid jumps into position. Would be nice if the battler just started with a home offset that put him in the right spot. Seeing him appear dead in his home position also takes away just a tiny bit. Would have liked for him to just disappear into opacity 0 after falling off screen.

I'm not sure how that would work as a repeated attack on a party, but it could probably be done.

This is so good. I love the shattered glass effect.