I couldn't get the linux version to run properly on gentoo. I just get a flat one-color window in full screen. Based on the color changes it looks like its playing the Unity logo and then goes into your menu but I get no sound or feedback of any kind, clicking or pressing any keyboard buttons doesn't appear to get me anywhere.

That's sad, other people reported having problems with the linux version as well.
But thanks for trying. Maybe it runs on Wine.

The suitcase enemies have too many hitpoints for a first enemy.

Bomb launcher takes up a little too much of the screen.

Honestly cant think of anything else that was negative.

Solid movement and controls.I really enjoyed the atmosphere. Awesome skybox and cloud effect. Sick ambience. The low poly models are really nice. Vinyl gun is fucking cool. I didn't understand if the HEYWHERESYOURGAME does anything but still, noice.

PS: You can see the box where one of the eyebois is along with a torch box from the walkway to the vinyl gun. 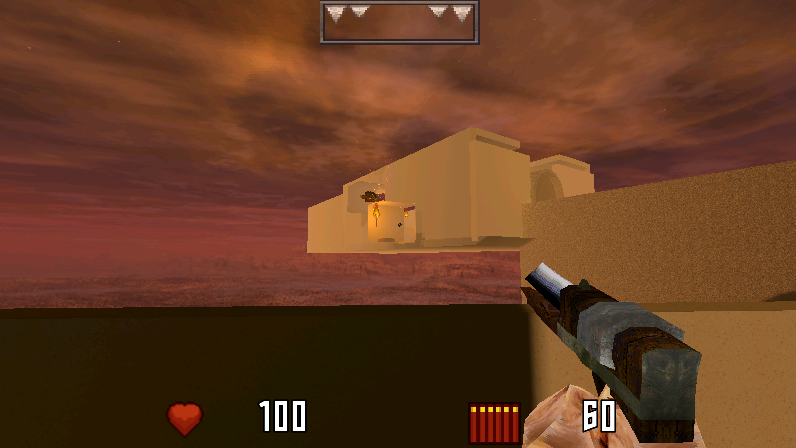 Thanks man!
The AGDG gun was just for shits and giggles heheh... but I'm glad you noticed these things, I will be sure to adjust them for next demo!

I wholeheartedly agree with the music thing, I once played it "vanilla" and once with https://www.youtube.com/watch?v=a6BbvCC0VI0 playing in the background and the difference was immense.

The only part of the demo I didn't like was the fight against the two flying eyeballs, these enemies felt a little overpowered for random enemies, being able to kill you near-instantly if they both attack at the same time. Though I guess they were this demo's bosses, so it makes sense in context.

Can't say I have much else to note, everything ran smoothly during gameplay. Once during loading Window's "This application has stopped responding" popped up for a second then disappeared when loading finished, though that may just be on my laptop. My favorite weapon is the vinyl launcher, I think bouncing discs of the walls and hitting enemies with that is pretty fun.

I never found out where the yellow key goes, maybe I used it without noticing it. I like it that way though, I prefer automatic item use over manually selecting key selection in action-type games. Looking forward to the next demo!


Submitted
Everyday Life of a Samurai
LikeReply
epiplonDeveloper1 year ago(+1)

Hey man, thanks for the feedback!

Haha, nice choice! But as much as I love the Doom OST too, the goal is to search for atmospheric kind of music.
Oh, the yellow key goes in the door that opened and led you to the room with the flying eyes. Glad you pointed that out, the game lacks player feedback sometimes.

Juicy. The core feels great, all the mechanics are intuitive. The level was fun to explore and I liked the subtle, less shooter focused things like platforming or using the vinyl launcher's bounce to toggle a switch. The goal felt a little obscure but that's something you can easily fix by adding more landmarks and misc props. (it also took me more time than I'd like to admit to figure out you had to dive at one part, thought that was just a puddle).
I also had a harder time aiming the pistol than any other weapon, I think because the projectile had a tendency to blend itself with the rest of the map. But that might just be me, I easily have trouble discerning some colors moving over some others.

I'd have liked a bit more shooting too, it felt a little tame in that area. But overall, nice demo !

p.s. - Also some music would give it a lot more atmosphere.

Thanks man! Really appreciate the feedback.