Take your friends on a retro-inspired road trip!
Submitted by fricochet (@fricotweets)
Add to collection 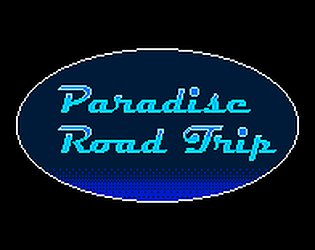 Very cute, fun game. I included it in my A Game By It’s Cover 2018 compilation video series, if you’d like to take a look. :)

Oooooh, I was looking forward to that since someone mentioned that you planned to play every game of the jam. Always a nice feeling to see someone else play and like my game. And of course, also interesting to see the other entries from the perspective of another player. c:

I actually found this game really relaxing! You did a great job capturing the chill nature of a road trip while keeping enough game elements to keep it engaging. Actually it reminded me a lot of Oregon Trail, without all the dysentery haha  great work on this!

Thank you for the feedback, I'm glad to hear that you enjoyed it! Fun fact: during development, my actual concept was "Oregon Trail, but with less dysentery and more chill." I'd use that exact term to describe my idea to a few people. The scope proved to be too ambitious for the deadline, so I simplified quite a few things, but it's funny that it still evokes the exact reaction that I was hoping for. x)

I love how chill mode turns the obstacles into something you want to hit and the little text bubbles are a nice touch adding character to the game. Good work!

Aw, thank you! I probably got that idea from Pac-Man. Avoiding obstacles(/enemies) until you trigger a special mode and turn the tables around is such a simple idea but oddly satisfying. =)

(I'll also get to play your entry tomorrow!)

This is a great interpretation of the Famicase design, and the music is ace.

I like that the game is not overly complex with a ton of different resources to manage, individual character stats, and so on. Just a nice chill road trip with friends.

A couple of notes:

1. More variety on the road conditions, such as different types of obstacles, hazards, traffic, weather etc. would be nice to see.

2. It would be great to have a way to earn money, maybe by popping balloons in Chill Mode? On the other hand, running out of cash is basically guaranteed on a real road trip so the game is very realistic in that respect.

Whee, thank you for the kind words! I'm especially glad that you liked the soundtrack, that is probably my favorite part of the game. c:

1. I totally agree. Originally, 4 levels were planned: the hometown, the grasslands, the desert and the Pacific coast, each with different sceneries and hazards. For example, the desert would have had fewer and less damaging obstacles (such as tumbleweed) but vastly increased thirst rate and distance between the gas stations, supermarkets etc. Traffic was also planned but I didn't like how the other car designs turned out...the graphics were generally one of my biggest problems and I still have a lot of room for improvement.
But when a few really annoying bugs popped up during the last days of the jam, I decided to scrap most of it and release it with the test level as the only real level.

2. I thought about that, but I wasn't really sure how to implement it. A typical arcade game would probably spawn bags with dollar signs on the road or something like that but that seemed a bit too unrealistic for what I had in mind (says the dev who lets you crash into a  swarm of balloons that comes out of nowhere). Another option would have been an ATM at gas stations or supermarkets but that would probably ruin the idea of a limited budget. I also thought about a minigame at the start that lets you earn your vacation budget by working in some small job but there was simply no time for that. So ultimately I decided to just give the player a fixed budget that should (barely) be enough to reach the end of the game.
But I like your idea with the balloons in Chill Mode. Could work as a direct "CHILLING STREAK BONUS: 25$" message or something a bit more integrated into the gameplay, e.g. triggering one of your passengers "accidentally" finding money under the seats when a certain combo is reached.

Now that the jam is over, I'm planning an updated version of the game that tackles a lot of the weak spots of the game. It will also feature a bigger soundtrack with many songs that weren't finished for the current release. Again, thanks for the feedback and thanks for playing!