Awesome, would love to hear more!

Oh, nice! Makes me happy to see it used in a song, especially as part of an EP on Spotify. Sounds pretty dreamy, I like it!

Thank you for the kind words! The engine I'm using changed its licensing model a while ago, unfortunately. And I don't have the extra license required for Android exports, so an Android version will not happen anytime soon, unfortunately. :(

You can use all songs you make with it in commercial projects! :)

Sorry for the late reply, but I'm really happy to hear that you liked it! <3

Heya, welcome back! <3 And yes, the custom patterns should still work. If I recall correctly, the updated version just loads all the old data first and then assigns a default value if the data from the newer versions isn't included. Aimed for backwards compatibility there. :)

Thank you! Yes, you're allowed to use the songs you create with it in any projects, even commercial ones. :)

Really enjoyed this. Very unique art style with both very pleasing 3D backgrounds and very smooth pixel art animations. The music fits well, too. I also liked the theme of making the most of your remaining time and seeing that whatever achievements you might have in mind may not be the ones that actually make you spend your time well. Good job!

Gave it a shot! That jump was manageable now. Managed to play it through to the end, though it got really tricky in the two-and-a-half levels after that. x)

The first three options (restart/redownload etc.) there won't do much. If anything helps, then the fourth option with xattr. The comments below also go into a bit more detail and give a few tips that can help better. But sorry to hear it didn't work out!

Hi! I assume you're using the Mac version? It had some issues with that. The reason is that MacOS can be pretty restrictive with indie games that are not made from people within the Apple Developer Program (which costs 99 USD a year). The fourth option here (and with more info in the comments section) could work to circumvent this:

Really liked the art style here, reminded me a bit of Persona 4 (Golden), which I loved. And every game should have the option to give a kitty love!
( ⓛ ᆺ ⓛ *)

I noticed the the books on the left increased both the study and the energy meter, so that was kind of a way to cheese it when you do it with full energy. Maybe balance that? Otherwise, I like the game idea. c:

Took me a bit to figure things out, but I liked the game idea. The visuals and the music are also very soft and pleasing. Cute!

Adorable little platformer. Art style reminds me a bit of a mix between Spyro and Wind Waker, very soft and colorful. It was fun looking for all the 70 tokens and that little, cute dance at the end was totally worth it. The music and sound effects also fit very well, all in all a very fun experience. c:

Fun little game. My high score was 72. Gets quite challenging after a while. I love the slide guitar in the soundtrack. :)

Quite a fun little game with a very easy to understand concept that gets a lot of replay value with the upgrades and the high score. The music is nice (always a fan of harpsichords), the artwork is quite fitting (especially love the black cat) and the interface also does a good job at showing everything that's important in a pleasing way. Neat!

Lovely and fun little game. Nice background track, the long stretchy parts of a cat are quite amusing and the pride flags are also a cute touch~

Finally a game that captures the struggles of wanting to sleep in. x)

Quite hectic later on, but on my second attempt, I managed to snooze until the end. The relaxed music, interrupted by all the alarm sounds and noises captures the setting really well. The pixel art is also great at not only setting the mood, but also highlighting the different interactive elements.

Wow, did not expect such a neatly worked out story to come out of a 48h jam! Very impressive output from the writer, I must say. It was surprisingly intense and mysterious in a way that kept me glued to the screen, but it also had its cute moments. The music and the lush art complimented that really nicely.

There are a few typos here and there ("pulled out a small vile", "one step after then next"), but with such a word count in a jam, that's understandable.

Quite a unique and outstanding entry for this jam!

A very impressive entry! The character design, the mechanics, the cute little story, the musical cues...all flawlessly executed in a way that perfectly captures the theme of the jam. Remember seeing some of its WIPs on the Discord server and was very excited to play the final game. And what can I say? It was even better than I had imagined! Great job!

Excellent work there! The sprites are full of life with smooth animations, the level backgrounds are gorgeous, the music is very immersive and the short story with that adorable cat character made my heart melt at the end. Lovely game, and I'm not just saying that because I'm biased towards cats myself. :3c

A very cute game idea, making your own little haunted house as a service for others. The little ghost sprite is adorable!

That was an incredibly relaxing and immersive little experience! You did a great job at creating that dreamy atmosphere, like sweet childhood memories of playing an obscure favorite PS1 game that never existed.  The visuals, the music, the world design...awesome work!

Took me a bit to figure the controls out, but it was pretty fun once I got it to work! Fit in quite nicely with the theme of not giving up. I also like the soft and cheery graphics, very wholesome. With the lovely music on top, you have a cute little game!

Loved the artwork and character design here! Very cute main character and just as cute enemies. I also really liked the idea of having other players' messages as a little motivation boost to sweeten a game over. The music is also nice.

I couldn't quite make the jump here: 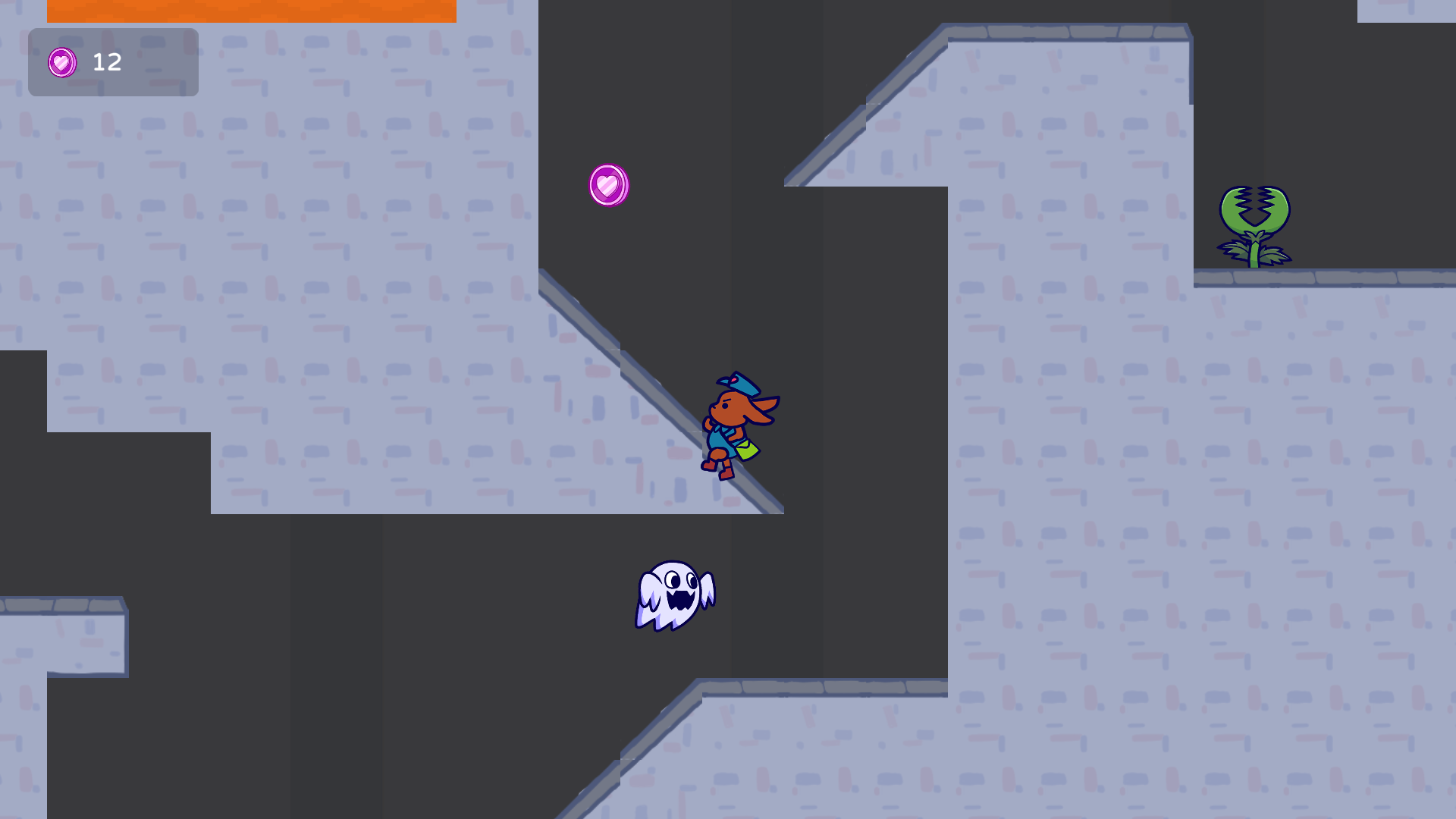 So I had to stop at that point, but I really enjoyed your game!

This. Was. Sooooo. Relaxing~

The dreamy visuals and that spacey lo-fi guitar track...I genuinely feel like it's bedtime  now and it's not even 7 pm. The gameplay was nice as well, took me quite a bit to get everything on expert mode; it's a simple but still pretty fun mechanic. Thumbs up!

It's a very promising little platformer with quite a bit of attitude. The animations are super smooth and the tiles and backgrounds are also beautiful to look at. It's a bit of a pity that the rocks and upper platforms in level 2 don't seem to be working yet, as I raised my jump height quite a bit just to fall through them. Counters for the number of souls or upgrade levels would also be useful. Still, it has a lot of potential and I'm sure the post-jam updates without a deadline to worry about will make these improvements quite manageable. :)

A very relaxing little game. I liked reading through all the flower meanings and trying to figure out what would fit best in the customer's situation. Being creative is pretty fun there and the music added a lot to that calm, cheery atmosphere. I was just a bit embarrassed when I accidentally clicked on "Finished!" instead of the flower guide and had the customer thank me for an empty bouquet. x3

A very cute and wholesome little game and a really impressive one for GB Studio! Managed to use its aesthetics with the color palette, sprite size and the GB sound chip very well without making it feel like any technical limitations were holding it back. Lovely game!

Even if it ended up being more of playable teaser, I really liked the direction you were going for, which is both slightly unsettling and oddly cozy. I also appreciate mental health apparently being a crucial point of the "don't give up" theme here, which is certainly a bit heavier than most of the WG games, but important nevertheless. Would love to see more of this!

Definitely one of the darker interpretations of the theme here, but I liked it quite a bit. Could be a fun puzzle platformer, maybe add a little story and some music and it has a lot of potential. :)

This has to be the most wholesome turn-based battle ever! Very cute idea and implementation. And the soundtrack is also really fun. Out of the three very sweet characters, Caramel Cat has to be my favorite!

This is a ridiculously cute game, from the graphics to the music to the very idea of cheering a little sprout on to thrive and grow. :)

I liked the idea of a wholesome little witch shop that helps customers get the spells and incantations they need. Would be handy to have that in real life! The art is pretty cute, especially that little forest spirit. Music also fits in nicely. Well done!

A short, but very rewarding experience. The art style is magnificent, with the charming hand-drawn characters and locations (a bit reminiscent of Flash games back in the day, but more refined) and the audio is very impressive. Including the sound design, but especially the music. Reminded me a bit of Final Fantasy 7/9, which I hold in high regards, but without the technical limitations of their soundchips. Awesome!

A very relaxing experience with the lush colors and the soothing soundtrack. I also liked the short story of it and incorporating the theme by encouraging someone other than the player to not give up.

It looks pretty promising, but I don't think I can really play it? In the Windows version, I've gotten to two scenes so far. One was with a disco ball with a big bar on the left with arrow keys on top, but nothing seems to have happened when I pressed any of them at any time. The other was at a graveyard where the bar on the left didn't show up. Nothing happened there, either. There seems to have been a progress bar at the top for both, but that didn't change as well.

Am I missing something there?

P.S. If you tag the Windows download with the Windows OS on the itch page (like the MacOS download was tagged with MacOS), downloading it will also work in the itch app.

Excellent little game, a lovely homage to Micro Machines. Took me quite a bit to get to the finish line the first time, but figuring out the physics was a lot of fun. The soundtrack is also great, especially love that FM bass during the race, very reminiscent of Sega arcade games and the Mega Drive/Genesis era

I think some more performance upgrades could have been cool and would have been in line with slowly improving and never giving up, but with submission deadlines, that's maybe something that just didn't fit in in time. :)